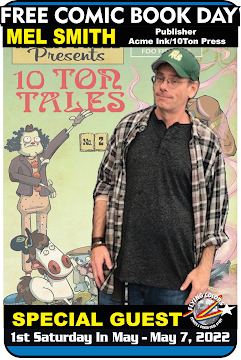 Join us at Flying Colors Comics

These Special Guests will be signing starting at 11AM. Be here for the fun.. and for the FREE comics!

Mel Smith's comics career goes back to 1985 when he started as an artist and writer for Pinnacle Comics. Mel is a winner of the prestigious Eisner Award for his WildCard Ink/Acme Ink Gumby comic series.

His list of credits includes Rock and Roll Biographies and the soon to be published Becoming Frankenstein, which Mel has been developing for 10 years. Other special projects for 10 Ton Press for 2022 will be announced soon.

Mel Smith resides in the wilds of Orinda, California with his dog Mavis. 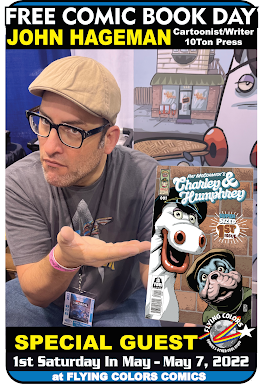 John is the mastermind behind one of Flying Colors top-selling comics of 2022... CHARLEY & HUMPHREY #1, the first comic book based on KTVU's afternoon kid's TV show puppets from days long gone. The comic book is fresh for today's market while still celebrating the fond nostalgia so many have for these iconic Northern California characters!

John is co-publisher at 10 Ton Press and one of coolest cartoonists working today! 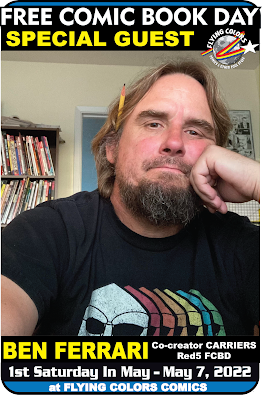 Clayton's Ben Ferrari is proud to be a part of FCBD 2022, with his CARRIERS co-creation featured in publisher Red 5 Comics FCBD 2022 free comic book!

Carriers can be described as Teenage Mutant Ninja Turtles except with pigeons in the New York sky rather than turtles in the sewer.
Ben's been piloting his own comics for years, having a hand in 80+ different projects. His comics career started at Rob Liefeld's Extreme Studios. Ben's Carriers comic series, which he co-created and edits, is his first to be widely distributed by Diamond Comic Distributors.

The first CARRIERS trade paperback releases in May, to be followed by more of his creations coming soon from Red 5 Comics, including the Divebomb graphic novel and Kanin the Marauder!
Posted by Joe "FlyCoJoe" Field at 9:38 PM