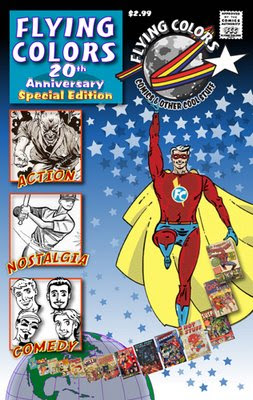 CONCORD, CA – On May 3rd, Free Comic Book Day will bring millions of new comic books to the hands of readers of all ages at participating stores in the United States and more than 30 other countries. And, as the name implies, the comics are FREE!

Joe Field, owner of Flying Colors Comics in Concord, California, and the founder of Free Comic Book Day will be celebrating May 3 in grand fashion. This year marks the 20th anniversary of his retail store, which has become known as one of the premier comic book specialty stores in the world.

To celebrate, Field is releasing "Flying Colors 20th Anniversary Special Edition" – a limited-edition comic book filled with new comics by Northern California artists and writers, and more. Published and edited by Field, the publication features art by Concord native Ken Hooper, and J.B. Bonivert of Oakley, Chris Mendoza of Vallejo, and Adrian Rivero of Alamo, and a back cover image of Mt. Diablo by Walnut Creek native Daniel Brereton. The pieces are written by J.B. Bonivert, Joe Field, and Humanitas Prize winner Cliff MacGillivray of Danville.

"Because Free Comic Book Day celebrates the tremendously diverse medium of comic books, the best way to mark the event and celebrate our anniversary is to present this new comic book by local and very talented artists and writers," said Joe Field.

"Reg'lar Joe" written by Joe Field and illustrated by Chris Mendoza and Adrian Rivero. It's 1925 and a boy dreams of playing for his favorite baseball team, the Kansas City Blues. This is the baseball origin story of major league pitcher Joe Bowman, partially adapted from Jack Etkin's 1987 book "Innings Ago."

"Toshiro Hundred Horses" written by Cliff MacGillivray and illustrated by Ken Hooper (Star Trek, Indiana Jones). On the Nebraska plains in the 1850s, the locals are terrorized by a creature the likes of which has never been seen before. Who---or what--is Toshiro Hundred Horses?


ABOUT FREE COMIC BOOK DAY
On May 3rd, simply walk into one of the 2,000 participating stores, including Flying Colors, to pick up your free comic book – it’s that easy. More than 40 publishers are participating by releasing special edition comic books for Free Comic Book Day. For more information, and the location of a store near you, visit FreeComicBookDay.com.

Joe Field brainstormed the concept of Free Comic Book Day in 2001. With the release and the attendant publicity of the first Spider-Man movie in May 2002, the first Free Comic Book Day put the spotlight on Hollywood’s favorite source medium---comics! Designed to reach new readers, call back former fans and thank current fans, the kickoff event marked another industry first - the first time comic book retailers, publishers, and Diamond Comic Distributors (the industry’s largest distributor), came together to promote comics to a wider audience. Their efforts were helped by comics’ broad appeal, and the day has grown each year.

"Free Comic Book Day is quickly becoming something like a holiday for an original American art-form," Joe Field said. "Comics can entertain, inspire and teach, and comics are the genesis of all visual entertainment, while also a great medium for telling smaller, more intimate stories. This truly is a Golden Age for comic books and graphic novels."

ABOUT FLYING COLORS COMICS
With something for everyone, and a newly remodeled interior that’s attractive and accessible, Flying Colors Comics is recognized as one of the world’s great comic book stores. Since opening the store in 1988, Joe Field has been an industry analyst and columnist, is an honored recipient of the "Will Eisner Spirit of Comics Retail Award," and serves as president of ComicsPRO, the Comics Professional Retail Organization, an industry trade and advocacy group.