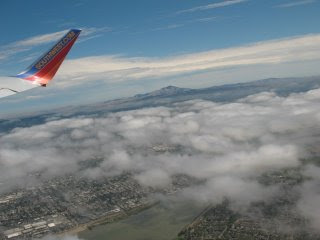 Libby and I are off to San Diego, so I want to let you know about some of the New & Cool titles hitting the racks at FLYING COLORS on Wednesday July 25.

•ALAN MOORE WILD WORLDS TP--- A compilation of Alan Moore's Wildstorm work!
•ALL STAR BATMAN AND ROBIN THE BOY WONDER #6 --- Frank Miller & Jim Lee! And you don't have to wait a year in between issues!
•AMAZING SPIDER-MAN #542--- Does Spidey discover who the mastermind is behind the shooting of Aunt May? The answers lie within.
•BUFFY THE VAMPIRE SLAYER #5--- Joss Whedon and Georges Jeanty deliver another great chapter in the 8th season of BUFFY!
•HELLBOY DARKNESS CALLS #4--- Buy any HELLBOY or BPRD comic or trade paperback and be entered to win a limited edition Mike Mignola signed HELLBOY lithograph!
•JOHN ROMITA AND ALL THAT JAZZ--- C'mon, this one's a no-brainer. John Romita art. Get it!
•ONSLAUGHT REBORN #4--- by Rob Liefeld. Did I tell you there's a convention this week?
•WALKING DEAD #39---More zombie drama from Robert Kirkman.
•WOLVERINE #55 --- The last round of the fight between Wolvie and Sabretooth. And a surprise variant cover, too---for those of you who care about such things.

That's just the tip of the iceberg---so we hope to see you soon in FLYING COLORS!

FlyCoJoe
Posted by Joe "FlyCoJoe" Field at 6:02 PM No comments:

See You in Sandy Eggo!

The huge Comic-Con International- San Diego starts Wednesday---and for the 22nd year in a row, I'll be there to see what's new in the world of comics and pop culture. And I'll be there to learn, so I can serve all the Flying Colors' Faithful even better upon my return.

In addition to trying to absorb all the massive amounts of new and cool stuff I'll see there, I will also be working behind the scenes, talking with many pros in the comics' biz, working to build an even better comic book industry.

I will be hosting one seminar that is open to the general ticket-buying public at Comic-Con and here's the info:

So You Want to Be a Comics Retailer? Friday July 28 from 4:30 pm-6:00pm in Room 2 (a larger space to accommodate all those interested!
Open to all Comic-Con attendees! With years of experience from ComicsPRO president Joe Field (Flying Colors Comics & Other Cool Stuff, Concord, CA), retailers Joe Ferrara (Atlantis Fantasyworld, Santa Cruz, CA); Nancy Trempe from (Comics Unlimited, Westminster, CA), Derrick Taylor (Comic Oasis, Las Vegas, NV) and Dave Hawksworth from Diamond Comic Distributors. Learn what it takes to make your dream of opening a great comic book store come true. An essential part of ComicsPRO’s mission is to grow the number of professional stores in the Direct Market and the response to this panel over the last few years has been a good start.

I will also be at the Will Eisner Comic Industry Awards, Friday night July 27 from 8pm 'til the cows come home. This year's event is hosted by my pal Bill Morrison (of Simpsons' and BONGO Comics' fame) and Jane Weidlin, the guitarist from the Go-Go's (yeah, we got the beat!).

I always run into current Flying Colors' Faithful, as well as folks who shopped here once upon a time. If you see me, be sure to re-introduce yourself and say hi!

As for what's happening in Flying Colors this week, we have tons of great stuff hitting the rack on Wednesday morning. Be here for it all!

FlyCoJoe
Posted by Joe "FlyCoJoe" Field at 3:07 PM No comments: 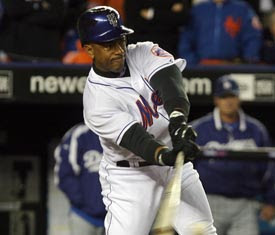 And that makes me a little melancholy.

I realize this isn't the most earth-shattering news for any of my readers of "The View from Flying Colors", but it's big-time sad news for me.

You see, Julio Franco is nearly 49 years old---and until yesterday, was still on the roster of a Major League Baseball team, the first place New York Mets, to boot. But Julio's dismissal at the All-Star break isn't a huge surprise. After all, he was hitting an anemic .200 this season as the Mets' primary pinch-hitter. Not many major league players keep their jobs with an average that skirts the Mendoza line, but I have been rooting for Julio Franco to play forever.

Why?
Because at nearly 49 years young, Julio Franco was the closest major leaguer to my age (just a wee couple of years older, thankyaveddymuch).

I always dreamt of being a major league baseball player, ever since my dad and grandfather gave me the gift of the love of baseball when I was a toddler. I played Little League, I played baseball in junior high school... but never played high school ball. I picked up City League softball upon my graduation from college and have been playing every year for almost 30 years.

My Dad passed away almost nine years ago. In his later years, even when I was into my early 40s, Dad and I would watch baseball games at the Oakland Coliseum or on TV--- and he would lament to me about not making me throw left-handed when I was a kid learning to throw a baseball. "That way," he'd say, "you could still be a southpaw reliever in the majors because they pitch forever."

I remember, when I wasn't even 10 years old, Charlie Finley, then the owner of the Kansas City Athletics (and later our Oakland A's), pulled one of his stunts by activating 59 year-old Satchel Paige to pitch in a late season game. Satchel, who was one of the greatest Negro League pitchers of all time, still had it, and if I recall correctly, pitched a scoreless inning.

The hopefully temporary end of Julio Franco's career is perhaps even more meaningful than a one-time stunt, because Julio has been playing pro ball for something like 25 years now. Earlier this season, he became the oldest player ever to hit a home run in a major league game.

In a small way, Julio Franco has allowed me to live a bit vicariously through his long career.

I'm sure I speak for a more seasoned generation of baseball fans---and especially long-in-the-tooth wanna-be major league players--- when I say that I dearly hope another team picks up the contract of Julio Franco. As long as he's playing, even if it's just to warm the bench and occasionally pinch-hit, I feel I still have a tiny chance of being on the field myself.

I guess you can call me Joe "Field of Dreams". 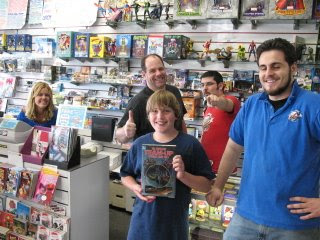 OR: WE'VE GOT YOUR COOL STUFF AROUND HERE SOMEWHERE!!

Sometimes things are just a bit more difficult than they should be. Earlier today, a young guy of about 12 came in and asked to put on hold a certain hardcover ("THE GREATEST DC TEAM-UP STORIES EVER TOLD"). And then he decided he didn't want it on reserve.

Seth's mom then asked me if I could find it--- you know, because I can find anything in my store, except in this case.

A full-on hunting party set out into the forest of Flying Colors graphic novels in search of the lost book. Seth knew the boy who'd come in earlier and called him on his cell phone to get a location of where the book might be among Flying Colors vast selection.

I entered the search.
And Mike Fantastic, too.
So did the inimitable Dave Bell.
Seth's mom proclaimed "Now that's customer service!"

Finally, Dave found it wedged behind comics and books in our Religion & History section (Yes, we're a comic book store and yes, we have a Religion and History section. I told you our selection is vast!)

And here's the photo to prove we found it! From left: Jenny, Dave, Seth, Mike Fantastic and Andy.

I post this story not only because it was the cause of great teamwork around here today, but to remind you that Flying Colors does have Contra Costa's best stock of comic books, graphic novels, and comics-related trade paperbacks and hardcovers. Manga, too.

So when you're looking for some fun summer reading, search no further than Flying Colors Comics & Other Cool Stuff.

Like I said up top: We've Got Your Cool Stuff Right Here--- or somewhere!

FlyCoJoe
Posted by Joe "FlyCoJoe" Field at 7:03 PM No comments: