There are some very major NEW RELEASES next week, a couple of which are pictured here.

FALLEN SON: The Death of Captain America featuring Iron Man is the most relevant to the July 4th holiday.

Written by Jeph Loeb with art by John Cassaday, this issue features the funeral of the star-spangled shield-slinger (that's Captain America, for you newbies). Guest stars galore---and if we hear correctly, talk of this title will be cropping up in the news media. This one is not to be missed! 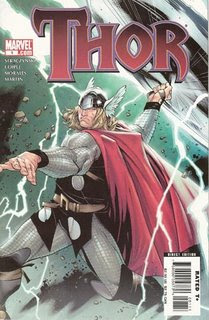 Also on sale Thursday July 5 is the all-new first issue of THOR, by the creative team of J. Michael Straczynski and Olivier Coipel.
It's now been several years since the God of Thunder has been featured in his own title and this one features an immediate hook to jump on and enjoy the ride.

Lots of other great stuff is on the way, too. So enjoy your holiday and be sure to make it in on Thursday July 5!

FlyCoJoe
Posted by Joe "FlyCoJoe" Field at 2:03 PM No comments: 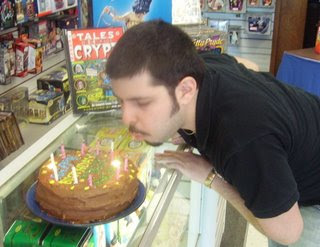 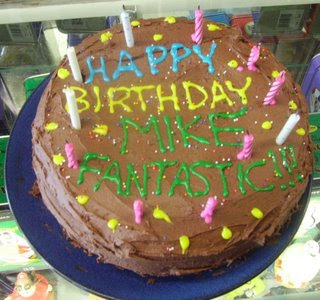 Mike is one of the stalwarts of the FLYING COLORS' team, having been on staff for more than six years.

Many regular visitors here have come to rely on Mike for good reading recommendations, since his tastes in comics range from contemporary best-sellers like THE GOON, HELLBOY, NEW AVENGERS and JUSTICE SOCIETY of AMERICA to all-time comics' classics, like Alex Raymond's FLASH GORDON and Stan Lee & Jack Kirby's FANTASTIC FOUR and THOR series of the '60s. Mike also has a near encyclopedic knowledge about all things STAR WARS related.

The cake you see in the photos was home-made with great care by Jenny just for Mike's b-day. It's a Devil's Food Chocolate Kahlua cake that is simply amazing!

So HAPPY BIRTHDAY, Mike---and thanks for being such an integral part of the FLYING COLORS team!

FlyCoJoe
Posted by Joe "FlyCoJoe" Field at 6:14 PM No comments:

Strangers in Paradise: ECHOES OF HOME

Today's Guest View From Flying Colors is from Jenny, as she sends her appreciation to artist/writer Terry Moore on the final issue of STRANGERS IN PARADISE... 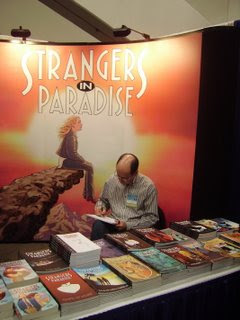 My favorite comic book series of all time has ended. All of you mainstream superhero fans out there, how would you feel if you never got to see Spider-Man swing through the city, Clark Kent turn into Superman, Adam Hughes draw Wonder Woman? No new stories ever again!!! Pretty depressing thought, huh?

Thankfully the ever-genius Terry Moore gave me a little bit of time to swallow this idea before reading the final issue of this incredible series last night. Strangers in Paradise is an old friend, a brilliant ride, a secret universe that feels like home and understands you.

I started the series at the lowest time of my life. I had hit rock bottom with a huge debt, feeling completely lost. When I picked up SIP, somewhere between Katchoo’s tortured soul and the continuous quest for connection, I fell in love again. 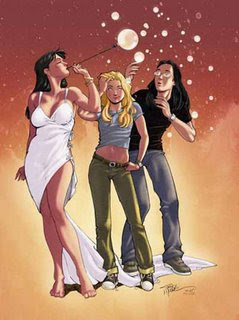 I can sniff out the potential SIP fans, those looking for something different, some character driven drama with fear and loss being the kryptonite and love being the hero. This book will always continue to draw new readers in.

All great things must come to an end. It can’t be like watching an over-the-hill Ozzy Osbourne sing live nowadays. There is a time to get off the stage and start something new---and I’ll be right there to see what Terry Moore, one of the greatest comic creators as well as one of my personal heroes has in store. 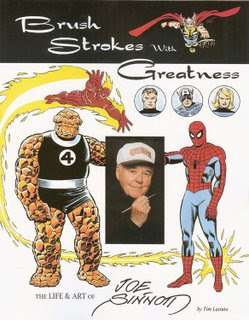 Every week at FLYING COLORS, each staff member makes a "Pick of the Week" for his or her favorite new comic book, graphic novel or comics-related book. My pick this week is a total no-brainer.

It's "Brush Strokes with Greatness: The Life & Art of Joe Sinnott"...and it hits the racks on Wednesday June 6 for New Releases' Day at FLYING COLORS.

Many FLYING COLORS' faithful know how I rave about the art of Joe Sinnott. Others may have heard me rave about Joe Sinnott, the man.

Joe has been involved with the comic book art business since the late 1940s. Best known as the inker of Jack Kirby's historic run on Marvel Comics' FANTASTIC FOUR series, Joe work has graced countless comics from TREASURE CHEST (those of us who went to Catholic School in the '60s no doubt will remember that one),to ATLAS (precursor to MARVEL), CHARLTON, ARCHIE, and DELL, among others. Joe did the comic book biographies of the BEATLES, JOHN F KENNEDY and MOTHER THERESA! The guy has done it all. 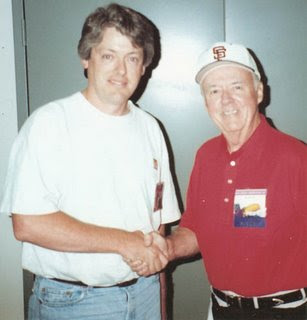 I was fortunate to meet and become friends with Joe Sinnott when, in 1995, he made his only trip to the West Coast for the San Diego Comic-Con.

I was thrilled to learn that not only is Joe one of the greats of comic art, he's also one of the most gracious, friendly and down-right good guys I've met in the comics' biz---which is full of good people!

On top of all that, Joe is huge fan of the SAN FRANCISCO GIANTS. Actually, his love of the GIANTS goes back to his uncle--- JOHN "Little Napoleon" McGRAW, Hall of Fame manager of the NEW YORK GIANTS from 1902-1932. So it came as no surprise when I first saw the cover of "Brush Strokes with Greatness"--there's a photo of Joltin' Joe wearing a SAN FRANCISCO GIANTS cap.

I'm certain the reason Joe decided to come to that San Diego Comic-Con in '95---and take a week-long train ride to do it--- was because his beloved SF GIANTS were playing in San Diego that same week against the Padres. So Joe was able to do the convention and see his GIANTS in person on the West Coast for the first time. After all, as one gets to know Joe Sinnott, it's obvious his love of baseball sometimes even surpasses his affection for comics.

One quick anecdote: At the '95 San Diego Con, while I was at Joe's convention table talking with him about the Giants (and comics, too, natch!), someone approached Joe's table, knelt down in front of the table, and with a regal sounding British accent, proclaimed "At last I have the chance to once again meet the great Joe Sinnott in person. I've long admired your work, the way you so brilliantly lay down the blacks, the brush work of a master! It's so good to see you again!" The man of effusive praise was none other than Barry Windsor Smith!

At that point, I was privy to a brief but mutually admirable conversation during which Barry sang Joe's praises and Joe returned them in kind.

Over the last dozen years, I've talked with Joe Sinnott on numerous occasions. Our discussions are always focused on the fortunes and (sadly, mostly) failures of the SAN FRANCISCO GIANTS. I've been a fan of the team all my life and have never seen the Giants win the World Series. Joe Sinnott celebrated his 80th birthday a few months ago---and the only GIANTS World Series victories in his lifetime were in 1933 and 1954! (Man, I can't believe I got that wrong the first time through!)

Along with the baseball talk, Joe and I have talked a lot about the world of comic books. It's been a delightful education for me. And a nicer guy I'll never meet.

Thanks, Joe Sinnott---for all your contributions to comics, to be sure, but also for your kindness to me over these years!