The following column was originally published in Comics & Games Retailer Magazine, an industry trade publication, in the summer of 1998. The column was directed at my fellow comic book retailers while also being a tribute to my father. He passed away in November 1998. I was pleased to be able to share this with him when he could still appreciate it. It's a love letter to my Dad for Father's Day.

Retailer: Son of Hero
The lessons learned from Dad
resonate in the comics' world

Heroes. In the comics, they're usually colorful, spandex-clad, rock-jawed impossibilities who bravely face danger and boldly buck the odds. This month's column is about my first and still favorite hero. He's never been featured in comics, but I've learned more from this hero than from any other in my more than 30 years as a comic book fan/retailer. 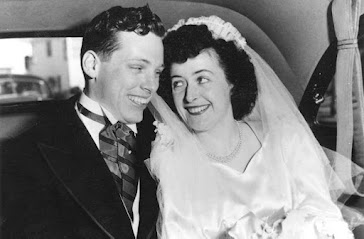 This hero is my dad, Joseph Aloysius Field. My parents recently celebrated their 50th wedding anniversary. The family threw them a nice party, with a few tears and lots of laughter. I took the liberty of taking one of their wedding pictures and a short release about their anniversary to the area newspaper. After the paper ran the picture and story, my parents received some congratulatory phone calls and I got some feedback from regular shoppers in my store. One, a very talented cartoonist by the name of Jeff Bonivert, asked if I was aware that my dad looked a lot like Clark Kent. I said "No, but I've always known that he is a Super-man."

As you read this, Father's Day should be lurking sometime near. As I write this, it's early May, spring seems to finally have vanquished El Nino, and my 70-something dad has just been released from the hospital yet again, this time after recovering from pneumonia. In the last ten years, Dad has been in and out of the hospital, treated for such maladies as clogged arteries, heart attacks, kidney problems, bad reactions to multiple medications, congestive heart failure, etc.

He was the first recipient in this area of a very high tech combination pacemaker/ defibrillator, a gadget to shock the heart into working again at the first sign of an attack. He's been through a lot. Fact is, with the exception of having the insidious habit of smoking for more than 40 years (he quit years ago, but the damage was already done, apparently), no one deserves an enjoyable retirement more than Dad. I guess I feel somewhat spoiled by my father, knowing that his dad passed away when my father was about 12, so I've had the benefit of 30+ more years with my father than he had with his own.

Dad's always been a philatelic fanatic who became a mail-order stamp dealer, allowing him to finance his own hobby. He tried to get me and my brother into stamp collecting when I was about nine, and he taught us both quite a bit about world history and geography in his stamp collecting lessons. Neither of us really stuck with the stamps, but I know I learned the joy of having a fun hobby from him. To this day, he spends hours of his retirement escaping to the serenity of his collection, corresponding with other stamp fans, trading to make his collection better all the time.

In 1967, my dad was roughly the age that I am now. That's also when I first became a totally immersed fan of comics after years as a casual reader. I have many fond memories of that era, not just from comics, but also the playful times with Dad going to ballgames, playing catch and summer vacations at the Russian River, just a couple of hours from our home in
Moraga CA.

Mostly I remember my dad always working to support his family, including my mother (oh, I could write many an inspirational column about this wonderful lady), five older sisters and a younger brother. He was employed by the Walter G. Legge Company, manufacturers of floor maintenance materials ("You're Always Safe With A Legge To Stand On"). Dad was the company's Northern California sales rep, a territory that included most of Nevada, and California from Bakersfield to the Oregon border, though my memory may be faulty. In any case, he covered a lot of ground, selling to hospitals and other large institutions. 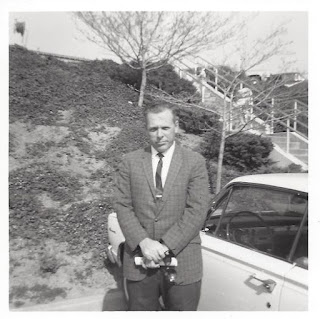 He labored long hours every week, including product demonstrations that often lasted into the weekend. This wide-eyed kid accompanied him on a scant few of those many Saturday jobs. I remember him always doing the very best he could, keeping his customers happy with his great sense of humor while the sweat poured from his brow. He worked hard and took great pride in his work, hoping to get ahead, working to land that huge sale or two that would somehow make things easier for the whole family.

His was an example he may have had doubts I would ever follow. I'll never be able to say I've worked as hard as he did, and only occasionally do my hours match the time he regularly put in, even though 50+ hours a week is fairly standard for me. But I am definitely my father's son and I've learned a lot from him. Perhaps we all can...

Health: Take Care of Yourself!

I remember one of Cliff Biggers' and Ward Batty's editorial cartoons (was it Everett True?) in the Comics Buyer's Guide from years ago. Paraphrasing here, it said: "If you put all the bearded over-weight men who are comic shop operators end-to-end, you'd have a kick-line that would circle the Equator."

My dad was always a pretty good athlete, but he only started a regular exercise program after he started having heart problems. Over the last few years, I've watched as one trip to the hospital has melted into another. Finally, I'm getting the message.

The wake-up call for me was the day I took Dad to his follow-up appointment after the pacemaker/defibrillator installation. He invited me into the exam room as the doctor gave him instructions for rehabilitation and care following the surgery. In one sense, I think he wanted me to be there with him, not only for me to see the scars and bruises from his heart operations, but to show me the importance of taking care of myself now so I wouldn't repeat his mistakes later.

In the last two years, my wife and I have made it a point to get to the gym 3-5 times a week, if only for 40 minutes to an hour at a time, and the difference in our lives is very positive. I've got a lot of friends and colleagues I care about in the comics' biz who need to hear this: We need you around a lot longer than you're allowing your body to keep you healthy! Let me strongly encourage everyone reading this to please take care of yourself. You'll be amazed at what a better outlook you'll have on business when you feel good about yourself.

My dad set a good example here, by treating everyone fairly and always striving to do the right thing. I know he went out of his way to help others, whether it was assisting acquaintances with job searches, simply lending an ear or giving some needed advice. He conducted his business in an honest and honorable manner, treating others with respect and dignity.

A few years ago, when comic shops were sprouting on seemingly every corner and speculation was rampant, consumers couldn't know into what kind of store they'd be stepping. Would it be a store that fairly represented the product it sold as entertainment or did it trade in the half-truths of price guides and full-lies of promised investments? We should all resolve to dazzle our remaining customers with spectacular service and an honest effort every day. Then maybe word-of-mouth will take off and allow us to see more new customers.

Dad's always been quick with a wide smile and sharp wit. His sly sense of humor put his personality in his work. Now, mind you, he did this while selling something as thoroughly unexciting as floor maintenance materials. We, as retailers of comics, games and the like, have the world's coolest products to sell and people eagerly come to us to have fun ...and yet, sometimes a smile is more rare in a comics' shop than an original copy of Action Comics #1!

Habits: Where Do You Go When You Hit The Wall?

There's frustration and stagnation in every business. Sometimes Dad came home after a long day's effort with no sales to show for it. But he knew his good work habits would always lead to a better day tomorrow. When the going gets tough in any kind of sales, it's best to go back to square one and start over. Dad did this with good organization, constantly following leads to new business, while continuing to service his existing customers.

As comics’ retailers, do you use those quiet Tuesday afternoons as a day to sulk or a day to plan? Do you remember what you first did to jump-start your store? Part of the problem in the comics' business recently is that everyone seems to be in the mode of sitting and waiting for some magic signal that people will want more of what he have to sell. If you feel stagnation setting in, stir things up. Re-organize and re-energize. Change the displays in your store. Have a party in your store and invite everyone! Do something different to shake the collective dust off your operation. But work at it...and don't wait.

The bitter truth is, my retailing compatriots, once the product is in the store, you own it...so you better find creative ways to move it out. One of the reasons I'm a big supporter of the Comic Shop Locator Service is that it is perhaps the strongest sign yet from publishers that consumers, and not retailers, are the actual end-users of the products we have in our stores. Prior to the CSLS, most marketing and advertising of comic related product was designed strictly for sell-in and much less was directed at sell-through to consumers.

Success can be measured in many ways. To the heartless, it's only money. But for every miserable millionaire, there are thousands of happy, uncomplicated people who have found their own ways to succeed. I've found my way, following in my father's footsteps. Primarily, as a husband and father of three wonderful daughters; then, as a comics retailer, realizing I can make a positive difference in the lives of everyone who comes into my store. Success for me is finding some happiness in whatever I'm doing every day in life and having a good night's sleep at the end of every day.

(Joe Field, the proud son of Joe Field, is the owner of Flying Colors Comics & Other Cool Stuff , 2980 Treat Blvd., Concord, CA 94518. E-mail him with your comments at Joe@flyingcolorscomics.com)