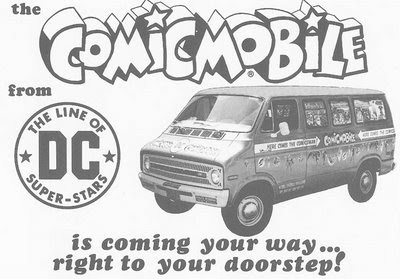 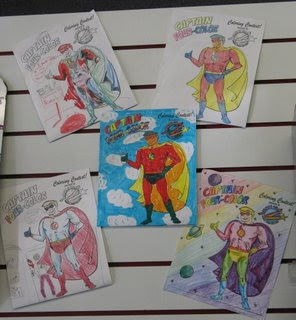 It was a good turn-out for our first-ever Captain Four-Color Coloring Contest! And we've been slow to announce the winners.

In the photo here are the winning entries. If you don't see your entry here and you completely filled out all the contest entry information, look in your mailbox in the next week.

If you see your entry here --- Congratulations! (And please watch the mail).

Flying Colors Comics & Other Cool Stuff is now on FACEBOOK!

Click on the link to become an official fan, browse photos, join conversations and connect with other comic fans and members of the FlyCo Faithful!

FlyCoJoe
Posted by Joe "FlyCoJoe" Field at 9:10 PM No comments:

In the run-up to the WATCHMEN movie back in March, Flying Colors received some nice coverage in the Contra Costa Times and the other Bay Area News Group papers.

There’s a link to the feature article HERE!

With comics and graphic novels being the source material for many big screen flicks, as well as TV shows, videos games, advertising, etc., there’s a news-media fascination with comic books that continues unabated. But when it comes to daily metro newspapers particularly, there’s seems to be a strange disconnect between Those Who Make the Newspaper vs Those Who Read the Newspaper. 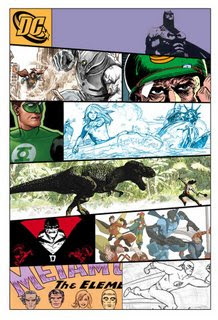 Here’s what I mean--- When the WATCHMEN feature story ran, I got many nice comments about it. I was stopped in the grocery store, people at church, at the gym, and of course, a number of regulars here at Flying Colors mentioned seeing my photo in the paper. The "disconnect" was that 90%+ of the mentions came from people over the age of 55, while the median age for all movie attendees is 32…and that’s about the average age of a Flying Colors’ customer. For a movie like WATCHMEN, I’d bet the average age skewed even younger.

If anything can be gleaned from this little anecdote, it's that the dedicated newspaper reader seems significantly older than the audience to which most newspaper professionals are writing. Going just slightly deeper, the reasons for this are likely varied--- news editors and writers are writing younger than their core audience, all-important advertising demographics don't favor aging readership, and a growing number of younger readers opting for online news sources. Ad dollars for all print media are falling faster than you can read this.

Over the years, in many newspaper readership polls, comics were often cited as the #1 favorite feature of most readers. Could a return to large broad-sheet Sunday funnies spur higher circulation in the flagging newspaper business? I’d like to think so, but given the dire straits faced by newspaper companies all over the country, I doubt we’ll ever see such a bold stroke.

That brings me to back to comics. DC Comics is preparing to roll out the much-anticipated 12-week series called WEDNESDAY COMICS. 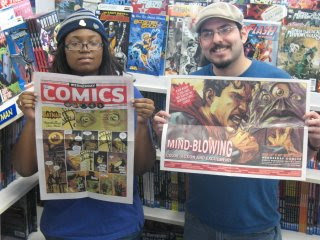 It’s a comics-market throwback to the big Sunday Funnies of generations ago, in a fold-out format that reveals each weekly strip to be a full 14x20 inches! In the phot0 above, FlyCo Retailing Brigade members Mike (Dr. Literal) and Melissa (Super-Wit)show off the promo piece for WEDNESDAY COMICS to give you a look at the size of the individual pages.

WEDNESDAY COMICS is also a huge call-out to our New Releases' Day. Every Wednesday for comics' fans is like a mini-holiday with new comics & other cool stuff to eagerly devour.

WEDNESDAY COMICS looks great, so I'd like to encourage everyone to reserve a copy soon. Your reservation assures you of getting this cool new series. The first issue hits the racks at Flying Colors on Wednesday (natch!) July 8.

FlyCoJoe
Posted by Joe "FlyCoJoe" Field at 1:54 PM No comments:

Here are a few pix of some of the entries to our
CAPTAIN FOUR-COLOR
Coloring and Art Contest.

You can view them all up close and personal on your next visit to Flying Colors.

Lots of creative work from everyone who gave us an entry.

The winners will be announced June 15, and the judges are listening to all the comments we hear from the FlyCo Faithful, so if there's a particular entry you love, don't be shy. Tell us why! 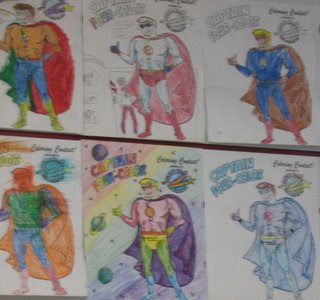 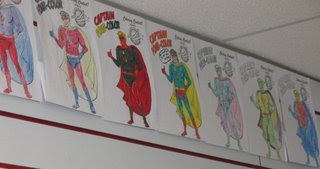 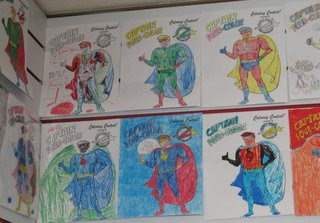 Wednesday June 3 is our New Releases Day this week. As always, we have lots of new & cool stuff for comic book fans of all ages and interests.

In addition, we received a shipment of two great books that we're featuring at way below cover price---Excellent books at excellent values!

Both are very cool gift items in limited supply, so hurry in soon!

FlyCoJoe
Posted by Joe "FlyCoJoe" Field at 2:19 PM No comments: