Nearly 200 comic book specialty shops in all 50 states and some 20 other countries around the world are gearing up for FCBD on Saturday May 6! (To find an FCBD-supporting comic shop near you, go to FreeComicBookDay.com and enter your ZIP code.)

We're going to have a great time at FLYING COLORS on Saturday May 6 with FREE COMICS for everyone! We're bringing in thousands of FCBD special edition comics for readers of all ages and tastes. Bring your friends!

Flying Colors will also host Bill (BONGO Comics) Morrison as our Special Guest! Bill is not only a great cartoonist, he's the creator of ROSWELL the Little Green Man, he's the editor and Creative Director for BONGO Comics' Simpsons-related titles---and more! Be here to meet this very cool talent and all around nice guy!

And for our Flying Colors' Faithful, we'll have some stellar specials on a wide variety of cool stuff! Don't want to miss a good deal, do ya? 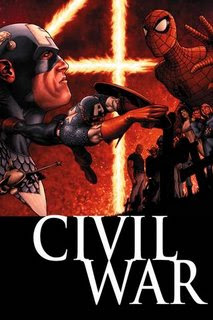 Your First Comic, Revisited:
I got some good feedback to the question I posed last time-- many thanks to SpookieG, Anonymous and Loren --- and I want to encourage everyone else to jump in and add your story by clicking on the "comments" link at the end of my last blog entry. Tell us about your first comic--- and the one that got you hooked!

One More Thing:
New Releases' Day this Wednesday May 3 is going to be HUGE!

DC's massive hit series INFINITE CRISIS comes to a scorching conclusion while Marvel's biggest story of the year, CIVIL WAR gets started with its #1 issue! We'll also have the latest volume in Fantagraphics' COMPLETE PEANUTS series, among so many other excellent reads this week.

Be seeing you in FLYING COLORS!

Pre-FCBD Question: What Was the Comic Book that Got You Hooked? 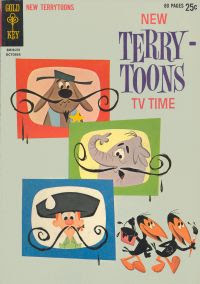 In an on-line comic retailers' forum, my good friend and great retailer Joe Ferrara from Atlantis Fantasyworld in Santa Cruz CA asked the question "What was the first comic you ever read?"

As we're coming up close to FREE COMIC BOOK DAY, I thought it would be a good question to throw out to readers of "The View from Flying Colors."

Before I really got into comics, there were a few steps along the way to getting totally hooked.

* I was about 5 in 1961 when I went with my Mom and little brother to visit an aunt in Oakland. My Aunt Fran had a stack of new comics to keep me occupied, including Deputy Dawg, Huckleberry Hound, New Terrytoons and a couple of others I don't remember. 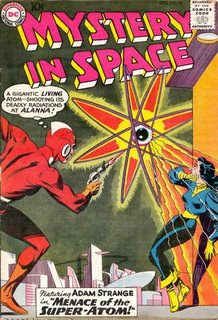 * When I was maybe 7, the neighbors across the street were moving, and the older boys there gave my brother and me a big box of beat up old comics. Looked through them, lots of comics I'd love to have now, including Mystery In Space, Tales to Astonish, etc, but I'm pretty sure they were done away with during some epic Spring cleaning at Casa Field. My Mom may have thrown away the neighbor kids' used comics, but she *never* threw mine away!

* I was 10 in the summer of '66 when on vacation at the Russian River. One of my friends there gave me Amazing Spider-Man #30. I thought it was OK, but it wasn't enough to make me seek any other issues. 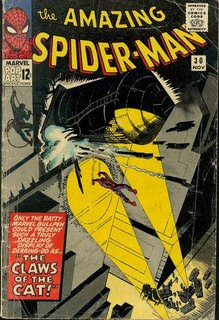 * It wasn't until I broke my arm on the third day of summer in '67 that my friend Steve gave me copies of Amazing Spidey #51 and Fantastic Four #65. He also let me borrow other various Marvels of the time (Tales of Suspense #92, Avengers #40, Thor #143) and I got totally hooked. 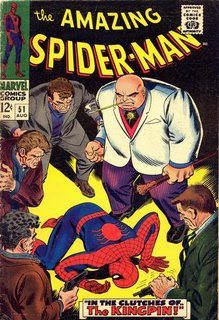 I read a LOT of comics when my arm was in that cast! To this day, Jack Kirby and John Romita are my two favorite comic artists--- although my horizons have expanded tremendously.


FCBD is a great opportunity to introduce *anyone* to the wonderful entertainment found in comic books. Even though my story takes place in my youth, one of the great things happening in comics over the last few years is that more people are getting interoduced to the comics' medium at various stages of life. 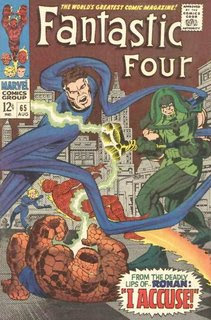 There's so much that comics offer readers of ALL ages in the way of lasting enjoyment, entertainment and edge-of-your-seat excitement! I hope you'll be able to make it to FCBD, the comics ' party of the year. Bring a friend or two to introduce them to wonders of entertaining comics! You know when it happens in comics, it happens in FLYING COLORS!


So with FREE COMIC BOOK DAY just 11 days away (!), I hope you post a comment to this blog with a story about the first comic book you ever read--- and the one(s) that got you hooked.

FREE COMIC BOOK DAY is Saturday May 6 (that's right, May 6, you'd think I would have gotten that right in my last last blog entry! Oh well, it's corrected now. Thanks, Rick!). In case you've never been to one of these FCBD events, we really make it a fun time here, with a party atmosphere--- and non-stop FREE comics all day long.

One of the coolest things about running FLYING COLORS for nearly 18 years is being able to get readers excited about some of the amazing stuff going on in comics and graphic novels. There's really nothing more satisfying than recommending a new book to someone and then have them happily come back for more.

That is the essence of FREE COMIC BOOK DAY--- it's a perfect day to discover all the cool things going on in comics, for readers of all ages and tastes, from super-hero comics for all ages to some very cool indie and alternative titles for older readers.

FlyCoJoe
Posted by Joe "FlyCoJoe" Field at 7:05 PM No comments:

Excitement is building for the 5th Annual FREE COMIC BOOK DAY, Saturday May 6 at a comic book specialty store near you! 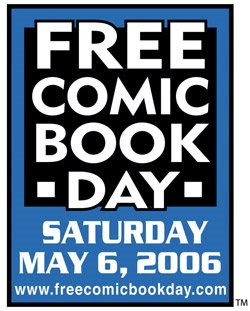 Check out http://FreeComicBookDay.com for the full scoop--- including a store locator so you can find a participating store near you.

For everyone in the greater Contra Costa County area of California, Flying Colors Comics & Other Cool Stuff invites you to the great party that is FCBD. Each year, everyone on the Flying Colors Retailing Brigade is in the store to introduce new readers to the wonders of the comics' medium--- and to re-acquaint former comic readers with all the great stuff going on in today's comics.

Here's the way it works: nearly two dozen comics' publishers produce Special Edition comics to be given away on Free Comic Book Day. You show up, we give you FREE comics. It's just that simple. Sure, we hope current comics' fans will drag along their non-comics reading friends to get in on the fun. Comics are for EVERYONE--- and there's no better time to get in on the fun that FREE COMIC BOOK DAY!

FREE is a pretty good price, don't you think? Bill is the creator of ROSWELL, the Little Green Man, art director for the FUTURAMA animated TV series, contributor to the recent "Dan DeCarlo's JETTA" compilation, and biographer of Archie Comics' most famous artist, the late great Dan DeCarlo. Bill will be here at Flying Colors on Saturday May 6 for Free Comic Book Day, signing copies of the BONGO Comics Free-for-All!

It's always a good time here on Free Comic Book Day, so we hope you can make plans to join us! The fun starts at 11am and runs all day long!

FlyCoJoe
Posted by Joe "FlyCoJoe" Field at 5:15 PM No comments: