Last night, we had a truly special event to cap off our year of Flying Colors 30th anniversary events.

Being that December 28 is Stan Lee's birthday and that he was so instrumental in my career move into comics, we wanted to celebrate Stan, so we started our event with a good crowd here all cheering a big and hearty "Excelsior!"

Taking a page out of the Marshall McLuhan handbook ("the medium is the message"), yesterday was the official release date for Flying Colors 30th Anniversary Special Edition comicbook (Stan preferred 'comicbook' as the correct way to name the periodicals we create, sell and enjoy since so many of them aren't funny and they aren't books in the truest sense of that word. But they sure are "comicbooks!").

Our anniversary comicbook features an epic, funny, weird, wonderful and heart-tugging 14 page story by cartoonist Jeff Bonivert, "It Came from the Short Box!" The story stars our own Captain Four-Color and the Flying Colors Retailing Brigade. I hope you'll pick up copy or three here soon.

Last night, as the event started, I looked out at the assemblage of awesome people here--- our FlyCo Faithful, my FlyCo Retailing Brigade and some of our favorite comics creators--- and I got, shall we say, a bit... overwhelmed.


I had a short intro speech written and prepared, but I just couldn't pull myself together to get to it, let alone through it. At one point, I tried to hand my script over to Libby. She's always far more poised than I am, but she knew this was my deal and while she helped me by taking the mike for a moment, when she handed it back, I was still a mess. Oh well.

Let me, for the record, put my little intro speech here, to say the things I wanted to last night.

Flying Colors is a business, a community, a family... built on gratitude.

Given that today would have been Stan Lee's 96th birthday, rather than a moment of silence--- that wouldn't be Stan's way--- on the count of three, let's a give a rousing "Excelsior!"

I'm very grateful to everyone who has contributed to the longevity of this little shop. That includes our staff---  the FlyCo Retailing Brigade. I really want to shine the light on the two mainstays of the Retailing Brigade: Mike's been on staff for 18 years and Marty has 11 years here. So major props to them!

I'm so grateful to my family, Libby and our three daughters, Michelle, Jenny and Cindy. I've put them through a lot these last 30 years, living on the edge, not knowing from year to year whether this business would make it for another year. Libby deserves special thanks and some kind of award for all she does for me and the Flying Colors' community!

Big thanks to those who helped put it together:
* John Hageman, cartoonist for Bay Area classic kids' TV icons, Charley and Humphrey.
* Cartoonist Tom Beland whose one-page story in this comic is one you're going to love!
* Our Captain Four-Color art contestants, all featured in this comic. 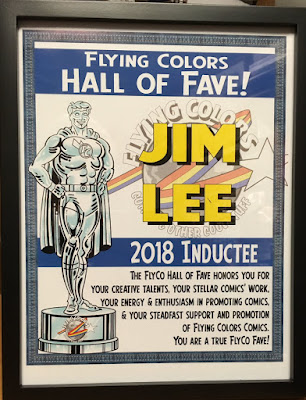 Mostly let's give a big round of applause to cartoonist Jeff Bonivert, the co-creator of our own Captain Four-Color.

Jeff's 14-page epic story in this special comic is so much fun. You'll recognize some of the characters in it, including Stan "the Man" Lee making a cameo. For those of you who are fans of comics Silver Age, you'll get more of the jokes than anyone. Thank you for this awesome story, JB!

As you look around the shop here, you'll see a good number of comic book professionals. Welcome, one and all!

So this is where the mystery of our "MysteryEvent" is revealed.

Over the course of these last 30 years, Flying Colors has put on so many events with comic creators. Free Comic Book Day events are huge, of course. We've done a number of events to debut and promote the work of these pros. All have become friends to me and to the Flying Colors community.

Some have gone above and beyond, giving Flying Colors much needed promotion and encouragement. They are also among our favorite people in the comics' biz.

Today, we want to honor a select few to be the first inductees into what I have dubbed the Flying Colors "Hall of Fave."
The FlyCo Hall of Fave honors these pros for their creative talents, their stellar comics work, their energy and enthusiasm in promoting comics and their steadfast support and promotion of Flying Colors Comics.

The honorees are:
Jim Lee (DC Comics co-publisher, co-founder of Image Comics, artist of X-Men, WildCATS, Batman, Superman, etc!) --- a huge star in comics and has been for nearly 30 years, but not a lot know Jim's first pro signing was here at Flying Colors!

Dan Brereton (creator/artist The Nocturnals, Giantkiller, Black Terror)--- broke into comics at about the time Flying Colors opened back in '88. He's been a part of so many great events here, too. At one, we were even visited by US Congress member George Miller!

Liam Sharp (current artist of DC Comics' Green Lantern, also worked on X-Men, Hulk, Wonder Woman, etc!)--- So good with his fans, so great in his dynamic art and such a good bloke, too! With excellent events like the debuts of Wonder Woman Rebirth, Cap Stone, Brave and the Bold and Green Lantern, Liam brings the goods!

Gene Luen Yang (award winning graphic novelist, American Born Chinese, Boxers and Saints, Secret Coders, Superman, ambassador for young people's literature for the Library of Congress) --- Moving comics forward while telling riveting stories is what Gene does. A fantastic talent, a verified genius and one cool dude, Gene has been the focal point of several great Flying Colors events... with more to come, we hope!

Seanan Mcguire (Hugo and Nebula award-winning author, writer of Marvel's Spider-Gwen: Ghost Spider)--- She shopped here from the time she was 10 years old... a time that wasn't always friendly to girls in comic shops... until she found Flying Colors. At 12, she told FlyCoJoe "I'm going to grow up and write the X-Men and when I do, Flying Colors will be the first place I sign them." When her first X-Men comic was released in 2018, after 28 years, Seanan kept her promise and flew down from her current home in Washington state for the happy event.
Read the sweet story HERE!

Mick Gray (current inker for DC Comics Wonder Woman)--- Ink slinger extraordinaire, Mick's first event with Flying Colors was in 1998 for the debut of DC's CHASE series. He was our first guest at Free Comic Book Day in '02 and was the first to add his ink to the Flying Colors Door of Fame! We love this guy, his comics work and his energy!


Welcome to the Flying Colors Hall of Fave! We hope you survive the experience!

Video from our Hall of Fave event! 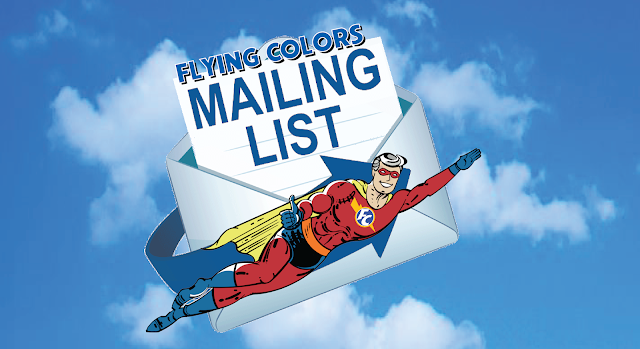 With Flying Colors' Mystery Event coming up Friday December 28 at 4PM... and more events coming in 2019, we invite you to join our email list... the FlyCo Emailing Brigade.
We'll send out an email prior to our Mystery Event giving you info you'll want to know.
Sign up here, please:
https://conta.cc/2R9KLr3

(Or if you're on FlyingColorsComics.com, look to the column on the left for the place to sign up.)
Posted by Joe "FlyCoJoe" Field at 8:34 PM No comments:

You Are Invited to Flying Colors' Mystery Event!

When: Friday December 28, 4PM-7PM
Where: Flying Colors Comics, 2980 Treat Blvd at Oak Grove Rd, Concord
Who: The FlyCo Retailing Brigade... and some surprises!
What: We'll have pizza and soda and a fun time on the last Friday of the year.

Why: Surprises!
The reasons will become clear soon. What we can tell you is December 28 is Stan Lee's birthday. While Stan "the Man" is no longer with us, the work he did in his 95 years on earth will live on forever!

Along with the titanic talents the likes of Jack Kirby, Steve Ditko, Dick Ayers, Don Heck, John Romita, John Buscema, Bill Everett, Jim Steranko (and others), Stan had a hand in bringing forth a new mythology with characters that will live on for generations.

So part of our Mystery Event will be spent sharing Stan stories and appreciations, to talk about the comics and characters he guided as editor and chief writer of Marvel Comics' Silver Age.

But there are other special pieces to this event. There will be something for every fan of comics and Flying Colors. And there may be some surprise guests, too.

So we  just say YES and be here December 28 at 4PM!
Tell us you'll join us for this event by hitting the "Going" button on our Facebook Event page.
By the way, here's a brief glimpse of something you'll see on December 28... 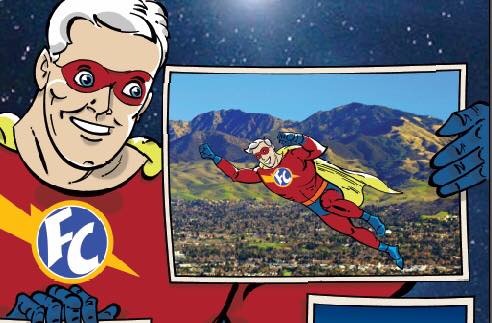 Posted by Joe "FlyCoJoe" Field at 3:57 PM No comments: 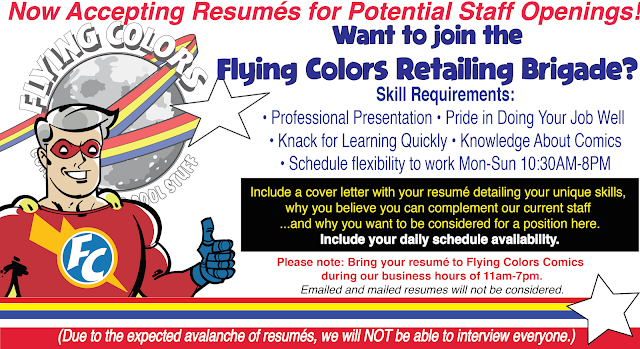 Spider-Man Into the SpiderVerse!

First, into Flying Colors.
Then... Into the Spider-Verse! 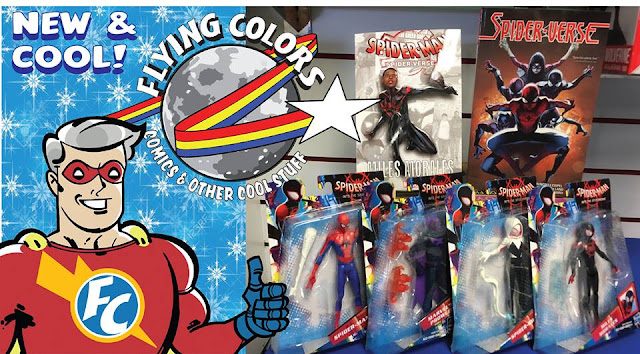 We've Got Your Cool Stuff Right Here
in Flying Colors!

Posted by Joe "FlyCoJoe" Field at 7:38 PM No comments: