(This is the speech Joe gave introducing Stan Lee at the "Sparky" Awards, given by San Francisco's Cartoon Art Museum on May 13, 2001. The awards are named in honor of Charles "Sparky" Schulz, the creator of Charlie Brown, Snoopy and the rest of the "Peanuts" gang.) 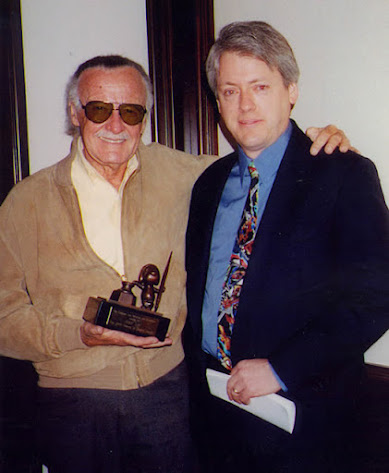 It was early June 1967. For this 11 year-old, that meant a full summer of playing little league baseball, swimming, and bike-riding. Lots of fun in the sun. But one day, as I was trying to teach a younger kid on the block how to climb trees, I broke my right arm in three spots by falling twenty feet out of one. That fall should have taken the fun right out of summer. That was until my pal Steve from down the street introduced me to comic books, particularly Stan Lee's Marvel Comics. In short order, I was a titanic true believer.

Twenty years later, while working at KJOY Radio in Stockton, I had the crazy idea to start a campaign to have Marvel Comics name Stockton the official home of the Fantastic Four. It was just the sort of story the media loves--- that perfect one-minute kicker for the end of newscasts, the kind of light and goofy story to balance the dreadful stuff we see on the front page every day.

The editors and creators then working on the Fantastic Four didn't much care for the idea.  It was too intrusive to their story plans. A well-respected reporter for the Los Angeles Times called Stan Lee in Hollywood to get his opinion. Sensing the spotlight, Stan said,  "We've been through the destruction of universes. I'm sure we can handle this one." That's when the wild ride started. For the next few months, the media came calling almost every day.

Then there was the ceremony attended by an enthusiastic crowd----

and he was even smooched by a provocatively clad young woman who also delivered a fairly tuneless singing telegram.

That was the first time I ever met Stan in person. Impressed enough by my public relations' prowess, he gave me a call some months later to help him line up media interviews to promote the publication of the first novel written by his lovely wife Joan. Working with both Stan and Joan Lee was a fabulous experience I'll always treasure. Shortly after that, I moved into comics professionally.

Besides being a creative powerhouse, Stan has also been a pioneer in many ways. His storytelling style completely revitalized the super-hero comic in the early sixties, but there's so much more to his career. Reciting a list of the thousands of characters he has created and co-created, or recounting the endless awards he's received over the years are merely indexes on a brilliant career.

I want to point out some of Stan's lesser-known achievements in comics.  His subtle legacies to the comics' world are the times when he has gone off the beaten path, plunging into the new and unknown in imaginative ways. A few examples:

* In the late forties, Stan created and published "Secrets Behind The Comics", one of the first books to give fans a look at how comics were produced and to give credit to the pros who made them.

* In the late fifties, away from the constraints of Timely/Atlas or whatever Marvel was being called at the time, Stan self-published books of fumetti, photo-comics with titles like "Blushin' Blurbs" and "Golfer's Anonymous." He wrote and produced these books, then marketed them through classified ads in sports and men's magazines, selling ten thousand copies each of some of them. I think this qualifies Stan as being the comic industry's first successful self-publisher.

* In the late sixties, while at Marvel, Stan pioneered a new format for comic books when the Spectacular Spider-Man debuted in a traditional magazine size. This was a precursor to original graphic novels and other more upscale formats, and was a heck of a value at 35 cents a copy.

* In the late seventies, Stan teamed with Jack Kirby for an original Silver Surfer graphic novel, intended not for comic shops, but for mass-market bookstores.

Publishing original comics' "Webisodes" on the Internet, exciting another new comics audience.  Innovation and imagination have been the keys to his sixty years of success.

It is truly awesome trying to measure the scope of Stan's profound influence on American popular culture. Great comic strip artists like Alex Raymond, Milton Caniff, Hal Foster, Sparky Schulz and others endowed newspaper comic strips with museum-worthy depth and originality. It can be said that Stan was among the first with the vision, talent and promotional skill to position comic books in that same light.

I may have lucked into this gig, but I feel I'm here representing so many professionals in the comic book business, retailers, writers and cartoonists who owe a debt of gratitude to Stan for being the most vocal and inventive cheerleader for comic books over the last 40 years.

Stan has literally millions of fans from his long and illustrious career, impressing generations of readers who have been scintillated by his sensational stories, cheered by his crazy creations and have been fervent fans of his fantastic fables.

For all the Titanic True Believers you have entertained, educated and enlightened---

We thank you, Stan---- for allowing us to always be awestruck eleven year-olds at heart.

the Sultan of Super-Heroes---

the Wild-eyed Wonder of the World Wide Web---