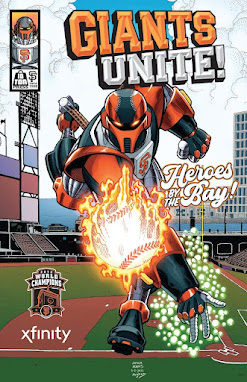 Be among the first 15,000 at the game that day to get your GIANTS UNITE: Heroes By The Bay comic book!

The fantastic cover shown here is by the great Arthur Adams. The beautiful interior art is by Brandon McKinney who along with Mel Smith designed thew new Giants' superhero! The story, by John Hageman, features lots of cool inside stuff for both comics fans and Giants fans.

The comic is published by 10 Ton Press with more excellent work by ink artist Chris Marrinan and colorist Jesse Heagy. Nominally, I'm the editor of this cool project, but the credit really goes to the full creative team.

I've been a baseball fan even longer than I've been a comics' fan (that's a *very* long time!), so the fact the Giants trusted me to get this project off the ground feels very special.

Get your tickets and more info here:
https://www.mlb.com/giants/tickets/specials/heroes

Posted by Joe "FlyCoJoe" Field at 9:17 PM No comments:

A number of times over the years, I've been asked by different people to write a book about my experiences inside and outside of the comics world. Doubtful that will ever happen.

I did write columns in industry trade publications, starting in the mid 1980s with the late and missed fan-oriented Comics Buyer's Guide newspaper, then in retailer-focused trade magazines in the '90s and early 2000s with Comic Book Business for a year or so and then with Comics & Games Retailer for eight years or so.

Maybe because it's summer rerun season, I've decided to share several of the columns I wrote all those years ago.

For those interested in looking back to cheer me on where I was right and looking away to ignore where I was wrong, please hit these links:

1) From early 1998, with a thought about how comics retailers choose to position our shops, read
"Aesop vs Barnum."

2) From the summer of 1999...be prepared. This one gets heavy.
"Freedom vs Responsibility"

4) Not a column! Here's the May 2001 text of my speech inducting Stan Lee into the Cartoon Art Museum's Hall of Fame!

5) Probably the one that made the most difference in the comics biz... my column spinning the original idea for Free Comic Book Day. Here's
"The Power of Free."

6) One of my columns about the Zen of Retailing:
"Look, Listen and Learn"

7) Lessons learned from my Dad resonate in the comics world:
"Retailer: Son of Hero"

8) My Fortress of Solitude was a Pool Hall:
"A Tale of Two Hang-Outs"

As always, I'm ready to accept any comments and feedback.
Maybe, just maybe, there will be a time when I can do some long-form writing and please the literally dozens of people who might be interested in reading more of my stuff.
Thanks for reading!

Posted by Joe "FlyCoJoe" Field at 6:03 PM No comments: 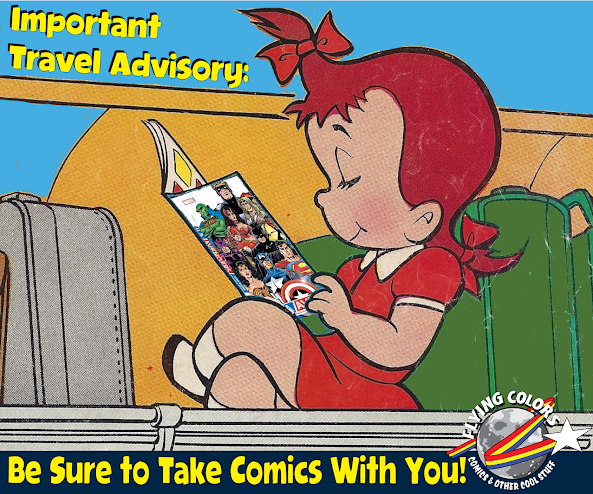 Posted by Joe "FlyCoJoe" Field at 5:36 PM No comments: 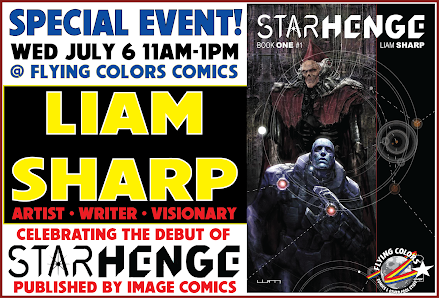 Liam Sharp's STARHENGE #1 from Image Comics!
LIAM SHARP (artist of Wonder Woman, Green Lantern, Brave & Bold, more) will be here to sign copies and talk about his new time-spanning series, STARHENGE!
At Flying Colors, we're totally excited to bring you the world debut signing for this new series!
What's it about?
A future Merlin travels to 5th-century Britain to prevent monstrous time-traveling killer robots from robbing the universe of magic, while Amber Weaver's lively present-day narrative reveals how she becomes drawn into this war across time! The Once & Future King meets The Terminator in 30 enthralling story pages, launching this original epic inspired by the Arthurian sagas!
Posted by Joe "FlyCoJoe" Field at 3:36 PM No comments: