"Funny Books with Aron & Paulie" interview FlyCoJoe about Free Comic Book Day, comics' retailing and a number of graphic novels you just may want to read!
Hit the link  HERE!
Posted by Joe "FlyCoJoe" Field at 12:03 PM No comments: 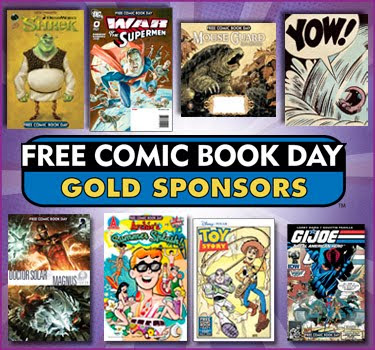 One week from Saturday on May 1, we'll be having a huge party to celebrate
the 9th Annual FREE COMIC BOOK DAY at Flying Colors.

For some interviews with the artists and writers of this year's FCBD comics, please hit this link!

For a look back at photos from previous FCBD events at Flying Colors Comics & Other Cool Stuff, hit this link!

Flying Colors will also have a special appearance from 11AM-1PM by everyone's favorite movie mutant--- the one and only WOLVERINE!

We'll be giving away thousands of FREE comic books on Saturday May 1 from 11AM-7PM--- and we hope you can make it and bring a bunch of your friends, especially the ones who are not currently comic book readers!

Posted by Joe "FlyCoJoe" Field at 5:37 PM No comments:

Posted by Joe "FlyCoJoe" Field at 5:36 PM No comments:

Erik Larsen, the creator of SAVAGE DRAGON and one of the founding artists of Image Comics, will be the special in-store guest at the Free Comic Book Day event Saturday May 1, 2010 at Flying Colors Comics & Other Cool Stuff in Concord CA.
Larsen is scheduled to appear at Flying Colors from 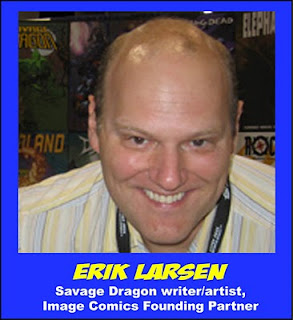 11AM-2PM. The Free Comic Book Day giveaway will be from 11AM-7PM. Flying Colors Comics is at 2980 Treat Blvd in Concord CA.

In addition to thousands of Free Comic Book Day editions being given away on May 1, Flying Colors will also have a limited number of FREE copies of Larsen’s SAVAGE DRAGON: Image First edition for Larsen to sign for comic fans and new readers alike.

“I love getting out to meet fans and show more new readers what comics are all about,” said Larsen. “It’ll be great to see everyone at Flying Colors which really is the epicenter of Free Comic Book Day.”
Erik Larsen is best known as the creator/writer/artist of SAVAGE DRAGON, the long-running comic book series from Image Comics. He has also worked on a variety of titles for Marvel Comics, including Spider-Man, Fantastic Four, The Defenders, Wolverine, and Nova. At DC Comics, Larsen has worked on The Doom Patrol, The Outsiders, Teen Titans, Adventures of Superman and Aquaman.

In the early ‘90s, Erik Larsen and five other comic book artists left the work-for-hire environs of Marvel Comics to form Image Comics, where Larsen launched his creator-owned Savage Dragon series. He served as publisher of Image Comics from 2004-2009 a period of great creative diversification for Image. 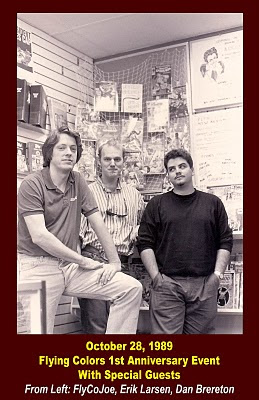 Free Comic Book Day is now in its ninth year. The event, founded by Flying Colors’ owner Joe Field, is celebrated the first Saturday in May at nearly 2000 comic book stores in nearly three-dozen countries. Since its inaugural year in 2002, more than 15 MILLION comic books have been given away, drawing attention to the creative diversity and entertaining storytelling found in contemporary comics.

More information about Free Comic Book Day can be found at http://FreeComicBookDay.com
Updates about the event at Flying Colors can be found at
http://FlyingColorsComics.com.
Posted by Joe "FlyCoJoe" Field at 1:12 PM 1 comment: 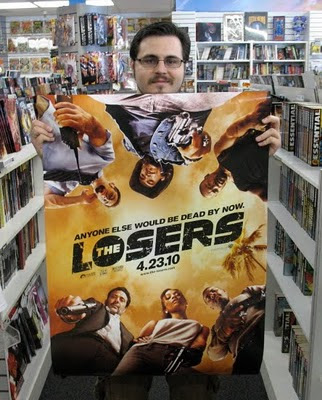 Just received at FLYING COLORS, courtesy of our friends at DC/Vertigo---

Flying Colors has a limited number of these posters.

They are available FREE with the purchase of the LOSERS Volumes One & Two collected edition trade paperback.

Read the graphic novel--- get the movie poster--- then see the movie!

FlyCoJoe
Posted by Joe "FlyCoJoe" Field at 3:31 PM No comments: 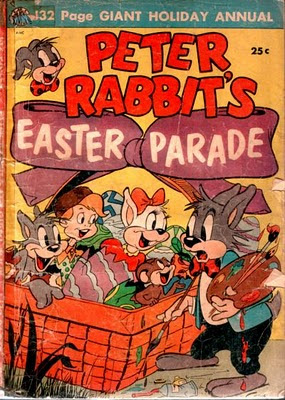 Flying Colors Comics will be CLOSED on Sunday April 4 for EASTER SUNDAY.

Have a terrific holiday!

FlyCoJoe
Posted by Joe "FlyCoJoe" Field at 2:44 PM No comments: