The movie most comic fans will be talking up this weekend is X-MEN ORIGINS: WOLVERINE, with unofficial FCBD spokesman Hugh Jackman back in the body fur as everyone's favorite clawed mutant.

Check out an early review from Randy Myers of the Contra Costa Times HERE!

And don't forget! We'll have a WOLVERINE comic book for fans of all ages here on Saturday for FREE Comic Book Day.

FyCoJoe
Posted by Joe "FlyCoJoe" Field at 6:24 PM No comments: 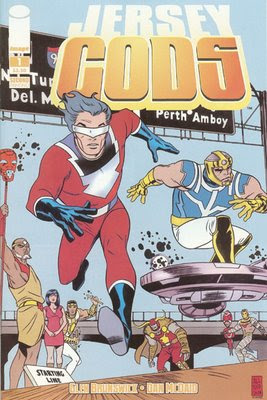 "I consider Mike Allred to be one of the greatest artists currently working in comics today," Brunswick said. "When Joe Keatinge told me that we had a shot at getting Mike to illustrate the cover to our first issue of JERSEY GODS I was really excited. The Jersey Turnpike racing cover that Mike turned in has become iconic - in one single image Mike was able to convey the entire essence of the series.

Since then Mike has been gracious enough to do four more unbelievable covers for us. If you told me six months ago that Mike Allred was going to become our permanent JERSEY GODS cover artist, I'd have wondered which psych ward you just wandered out of. On the other hand, maybe I'm the one that's crazy after all...and damn happy about it. Welcome aboard, Mike!"

Fans excited for the change are encouraged to stop by Brunswick's appearance on May 2nd during Free Comic Book Day at Concord, CA's Flying Colors Comics & Other Cool Stuff. In addition to the full lineup of FCBD offerings, FREE copies of JERSEY GODS #1 will be given away alongside a coupon good for either a dollar off each issue of JERSEY GODS #2-5 or purchase of the upcoming collection at the reduced price of $9.99.

Allred added, "I've been a big fan from day one and now to be part of the team, even getting team t-shirts, is super cool!" 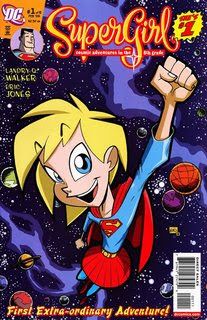 Flying Colors is pleased to announce the addition of two more guests for our celebration of FREE COMIC BOOK DAY on Saturday May 2nd.

Writer LANDRY WALKER and artist ERIC JONES, the creative team of SUPERGIRL: Cosmic Adventures in the 8th Grade will be on hand to sign copies of the DC Comics Kids Sampler (one of the FREE FCBD comics).

Landry and Eric will also sign copies of their other work available for sale at Flying Colors, including SUPERGIRL Cosmic Adventures, LITTLE GLOOMY and SUPER SCARY MONSTER SHOW.

Later this year, Landry and Eric will also be taking over the writing and art on the BATMAN: THE BRAVE & THE BOLD series, so we might just be able to get a sneak peek at their plans for that title, too. 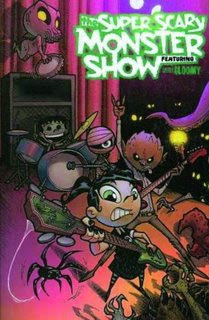 Make your plans to be here!

I don't discuss the Business of Comics on this blog much, but I do get interviewed on occasion. Recently NEWSARAMA posted an interview I did with reporter Vaneta Rogers (last September!) on changes to the business side of comics.

Now that those changes have arrived--- affecting the way retailers order comics and graphic novels from IMAGE Comics and DARK HORSE Comics, the interview is posted HERE!

FlyCoJoe
Posted by Joe "FlyCoJoe" Field at 12:02 PM No comments:

Free Comic Book Day, the little brainchild of FlyCoJoe, has a new star to promote the event. HUGH JACKMAN, star of the soon to be released X-MEN ORIGINS: WOLVERINE movie, gets behind FCBD with this promo. Also including a WOLVERINE movie preview.

FREE COMIC BOOK DAY is coming up fast on Saturday May 2!

I’m very pleased to make the official announcement here that one of our special guests for the event that day at Flying Colors Comics will be GLEN BRUNSWICK, currently the writer for the cool new series JERSEY GODS from Image Comics.

Fans loved Glen's previous comics work, including GRAY AREA with art by John Romita Jr, and KILLING GIRL with art by Frank Espinosa and Toby Cypress, both from Image Comics.

Glen is also Hollywood veteran having co-written the very cool father-son action flick from 2000 called FREQUENCY, starring Dennis Quaid and Jim Caviezel. The film was directed by Greg Hoblit (who also did UNTRACEABLE).

Brunswick wrote the screenplay BYE BYE BROOKLYN for Universal based on the Avon novel LAST DAYS OF SUMMER by Steve Kluger. Mark Platt and Gary Ross are the producers. Brunswick is co-producer.

To get all the Flying Colors Faithful ready for Glen’s guest appearance here, I asked him a few questions about his comics work. 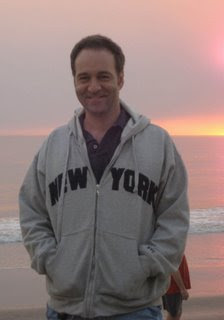 FlyCoJoe: Give us the scoop on JERSEY GODS.

GLEN: JERSEY GODS is a superhero book in which the hero, Barock, a fierce God of war from the planet Neboron, settles down with Zoe, a fun-loving high maintenance girl from the New Jersey suburbs. Now if he can just survive his meddlesome in-laws, household chores and Zoe’s crazy social agenda, he might be able to carve out a few minutes to save the galaxy and parts of South Jersey.

FlyCoJoe: So the Hollywood "high concept" pitch would be?

GLEN: It’s Jack Kirby’s NEW GODS done as a romantic comedy like "When Harry Met Sally." A recent review described it as "Jack Kirby meets Nora Ephron," which I love! 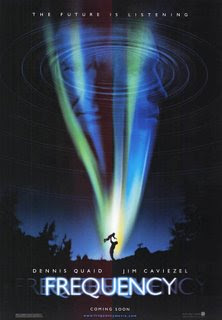 FlyCoJoe: Your leading man, the god named Barock, comes along at a time when 'Barack' has become a household name. Coincidence? Are the two even pronounced the same?

GLEN: Yeah, it’s an unfair coincidence, and they are pronounced the same though I’m tempted to pronounce it Beh-rock at this point. When I was developing the character it was pretty clear that Hillary Clinton was going to be the nominee. Then this Barack fella comes out of nowhere and steals her thunder and my main character’s name as well.

At that point, my Barock was already fully formed and speaking to me in his own Neborian tongue. It would have been WRONG for me to change his name. The way I see it, I’m waiting on the President to change his name instead. He’s plays a mean game of chicken, but I’ve got time.

FlyCoJoe: I’ve read you have JERSEY GODS plotted through the first three years. So when are lead characters Zoe and Barock going to see each other again?

GLEN: They have some minor interaction in issue 4 and they’ll be back together in full force in issue 5 when we wrap the first story arc. 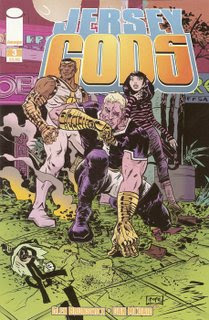 FlyCoJoe: We’ve been highly recommending JERSEY GODS to readers here at Flying Colors. This series has a lot going for it! There’s obviously the big space action, cool and cosmic character designs and a Marvel ‘60s vibe not only in the super-powered stuff but also with Zoe’s love life sub-plots.

Were you a dedicated comics fan growing up?

GLEN: The Marvel vibe is an honest one. I was a big Amazing Spider-Man fan as a kid. I got hooked on the book when John Romita Sr. was illustrating it just before the death of Gwen Stacy, curse him. She was my girlfriend too!

FlyCoJoe: Which series were your favorites? 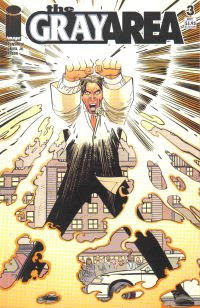 GLEN: I was a Marvel junkie. I read the Buscema FF run, Avengers during the Avengers/Defenders war and Sub-Mariner just as Bill Everett did his final swan song before his untimely death.


FlyCoJoe: And do they resonate with you as you’re writing JG?

GLEN: The main thing that resonates when I’m writing JERSEY GODS is that all of these books were really accessible to new readers. And I hope that quality is evident in my story and writing. I want the book to be modern but with an ease of access. This is why I made Zoe the main character. I wanted to make sure that the world-building wouldn’t be off-putting to new readers who wouldn’t generally pick up a book that also involves an alien god culture.

I’ve received a number of letters from women readers that are digging the book. That’s really exciting to me because they’ve let me know that they wouldn’t normally pick up this kind of story but Zoe makes it an exciting read for them. That kind of feedback really makes me feel like I’m doing my job. 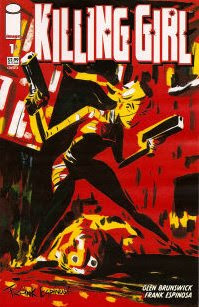 FlyCoJoe: Artist Dan McDaid’s work has a very retro-cool energy to it, like he’s channeling Jack Kirby, Darwyn Cooke and Frank Espinosa all at the same time. How come the world didn’t know about this guy before this new series?

GLEN: Beat’s me. Dan is amazing. To me he is a cross between Darwyn Cooke and Frank Espinosa who I worked with on KILLING GIRL. He has this crazy kinetic energy like Jack Kirby had and a polish of an artist many years his senior. He’s a natural, a genius and I was lucky enough to find him before the rest of the comic world got wise to his talents.

FlyCoJoe: Are you prepared for the blast that is FREE COMIC BOOK DAY? Is the day a holiday foryou like it is for so many who love comics?


GLEN: I usually hit 5 or 6 comic shops in the LA area, where I live, with my kids in tow. I think they love it almost as much as I do. And what can beat free comics, anyway? I can’t wait to spend the day with you and your peeps up in the Bay Area.

FlyCoJoe: It's gonna be a party--- and I hope that having you as a guest here will turn on a lot of readers to JERSEY GODS! Thanks for taking the time to share some insights with us, Glen.

I want to encourage everyone to get the latest about JERSEY GODS by clicking HERE!

And keep checking back here because more announcements are on the way!

FlyCoJoe
Posted by Joe "FlyCoJoe" Field at 4:21 PM No comments: 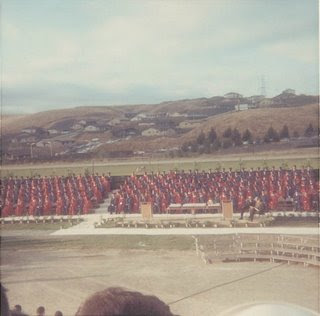 Recently, I've been trading emails with blogger J.D. O'Connor who has a site called called East Bay Daze, featuring news, trivia and some nostalgia about the "Lamorinda" area (the towns/cities of Lafayette, Moraga and Orinda, for the novices here).

J.D. asked me to share with him one of my columns I wrote years ago for the late Comics & Games Retailer magazine. In case you're interested in more after reading the column, just click on the "VIEWS" link on the menu on the left side of the screen here.

FlyCoJoe
Posted by Joe "FlyCoJoe" Field at 1:22 PM No comments: 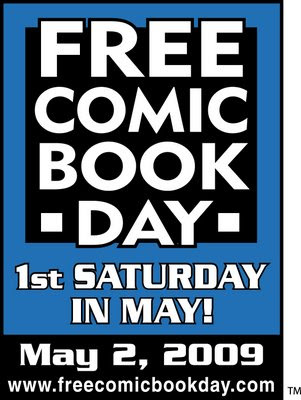 FREE COMIC BOOK DAY is the international comics' event of the year!

Be here on Saturday May 2 for thousands of FREE comic books and special professional guests (to be announced soon!).

And if by chance you'll be out of town and can't join us here at Flying Colors, then surely you'll be close to one of the other nearly 2000 shops celebrating FCBD in the U.S. and 30 or so other countries around the world.

FlyCoJoe
Posted by Joe "FlyCoJoe" Field at 4:34 PM No comments:

Nooch is on the loose again!

Now "The Nooch" is on the loose again.

Months after leaving his post at the Merc and landing a primo writing gig for Stanford University's "Stanford" magazine, Nooch has re-entered the pop culture blogosphere.

His new blog is called "SectorEarth--- A little corner of the universe for observations and opinions on pop culture and all the power it wields."

And it's worth a bookmark for anyone interested in views and reviews of comics and video games.

Check it out HERE!

(and check back soon for news of our guests for FREE COMIC BOOK DAY, coming up soon on Saturday May 2nd!)
Posted by Joe "FlyCoJoe" Field at 12:24 PM No comments: