... for those who don't know, I worked in radio in Stockton CA for 10 years before opening Flying Colors Comics in 1988.

I worked primarily for the 5000 watt powerhouse Top 40 station,

KJOY 1280AM, "The Great 128."  I worked there from June '78 until May '88, just three months before the opening of Flying Colors. In '85, I did a promotion to get Stockton, KJOY and Marvel Comics some publicity by asking Marvel to name Stockton as the "Official Birthplace of Marvel Comics' Fantastic Four."


Around that same time, I got the idea to try to syndicate a short radio feature program about comics and how comics fit neatly along the pop culture spectrum with movies, video games (really prehistoric video games!) and rock music.

So today, I am sharing with you another blast from my past... the sales brochure promoting my show, called GRAPHIC DETAILS (please note my hand-drawn and amateurish comic-style logo).  This brochure was sent to dozens of radio show syndicates---and it was my vain hope it could be placed before or after Casey Kasem's popular "AMERICAN TOP 40" show.


GRAPHIC DETAILS was the result of my interviews at the '85 and '86 San Diego Comic-Cons, plus my own bits of research gleaned from various sources. It was hosted by my dear friend and KJOY deejay Jerry Fuentes, who also did the super-hero drawing on the brochure.

At some point, and I know I have them around here somewhere, I'll post a couple of our sample programs, but for now... dig into this bit of personal nostalgia. And pardon me for saying this in a boastful way, but GRAPHIC DETAILS was years ahead of its time... as was my short-lived cable TV show called The Comics Cable (video coming soon-ish). 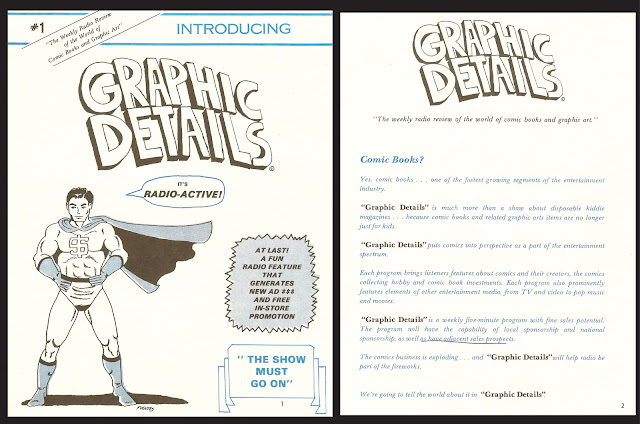 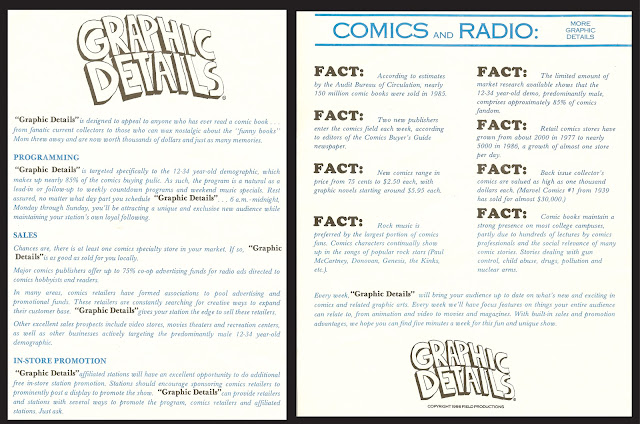 Posted by Joe "FlyCoJoe" Field at 5:39 PM No comments: 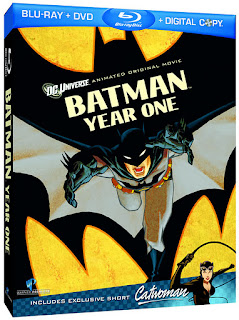 Every week, Flying Colors receives an average of more than 100 new comic books and graphic novels, plus a selection of "Other Cool Stuff" for fans of comics and pop culture.

This week, two new items we want to call your attention to:
• BATMAN YEAR ONE, on DVD and Blu-Ray. A fantastic new animated DVD adapting one of the all-time best Batman stories.

• WALKING DEAD Action Figures. These are the first action figures tied in to the mega-hit TV show, comics and graphic novels. Figures in this series include Officer Rick Grimes, Michonne, Zombie Roamer and Zombie Lurker!

For a list of all the New & Cool Stuff arriving at Flying Colors every week, please visit our Facebook Fan Page! 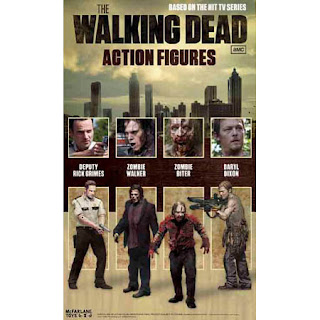 FlyCoJoe
Posted by Joe "FlyCoJoe" Field at 8:13 PM No comments:

Still Looking For the (Music) Answers

From time to time on this blog, I like to go outside the world of comics and talk about other things for which I am emphatically enthusiastic. Dig through this blog or read the header above it and you’ll know that usually means either baseball or music.
Well, we have another post-season without any of my teams in it. The games have been fun to watch even still, but I am already looking forward to the time between the end of the World Series and the start of Spring Training to see what moves the Oakland A’s and San Francisco Giants make. Anything can happen (see: Arizona Diamondbacks going from 90+ losses in 2010 to 90+ wins in 2011).
I have to believe the Giants will be front-runners in 2012 with their strong pitching, the return of Buster Posey and some young talent developing to go along with veteran players.  The A’s continue to be a low-budget team that develops a lot of talent but rarely sees that talent pay off for the A’s  at the major league level (see: LA Dodgers Andre Ethier, Colorado Rockies Carlos Gonzalez and Texas slugger Nelson Cruz as three players the A’s developed in the minors but were traded before they blossomed into big league stars).
OK, so that’s enough baseball (for now, anyway). So let’s talk music.
When you visit Flying Colors, there’s always music playing. Even when the baseball is on the TV, the sound is off while the music goes on. The music we play here is a vital part of the atmosphere and I’m always happy when we get good comments about the stuff we play.
Our play-list features favorites from our Flying Colors Retailing Brigade members which includes lots of classic rock, some new music from across the rock and pop spectrum, plus the occasional forays into jazz. There’s a heavy emphasis on my favorites….you know, since I’m the boss and everyone wants to keep me happy. My tastes range from even more classic rock, lots of indie power pop and new and classic progressive rock, along with the occasional soundtrack and Big Band.
But what’s “Progressive Rock,” you may ask? Well, a few years back on this blog, I wrote a piece about progressive rock and my favorite current band that plays that varied style of music--- the mighty Spock's Beard--- a band that would be HUGE if radio programmers actually cared about a fuller range of music. You can read that post HERE!
But I digress!
There is another band that released their debut CD within the last few months getting a lot of airplay here at Flying Colors. The band is called 41POINT9… and the disc is called “Still Looking For the Answers.”
Well, when it comes to the melodic side of prog-rock, I believe I’ve found The Answer with this release. But honestly, I'm still looking for the answers of how to put into words how much I'm enjoying this debut effort from 41POINT9.
Let’s start with the name. Douglas Adams, science fiction author of “The Hitchhiker’s Guide to the Galaxy” wrote about a group of super-intelligent otherworldly beings demanding to learn the “Ultimate Answer to the Ultimate Question of Life, The Universe, and Everything.” They specially construct a supercomputer, known as Deep Thought, just for the purpose of finding “The Answer.”  Seven and half million years later, Deep Thought has the answer, which turns out to be 42. While the Answer is found, The Question remains a mystery.
Well, if The Ultimate Question is “What is perfection?” and the answer came back “42,” then I figure 41POINT9 has to be pretty close to perfect. At least in prog circles, anyway…
So, here come Bob Madsen, Brian Cline and Kenny Steel, with a little help from some of their friends (including drummers Nick D’Virgilio and Jimmy Keegan from the mighty Spock’s Beard), and they’re all “still looking for the answers.”
On the CD’s second track, we hear a song that fits the mood of the country right now. “Living In Hard Times” recalls without aping the dramatic Genesis opus called “Driving the Last Spike,” as both are longer songs that tell tales of trying to persevere through miserable circumstances.

“Building Blocks” feels like a lost gem from the Alan Parsons Project, with its driving bass, Brian Cline’s Eric Woolfson-like vocals and the harmony-laden pop hook in the chorus.
“Surface Tension” is an instrumental that rocks with the fusion-like precision and melodicism of Brand X.
“Promise the Moon” is a more gentle, romantic ballad that also breaks into a memorable chorus. The closing track “The Torch” is an almost country-like ballad that would seem to fit comfortably with Guns N’ Roses “November Rain.”  The title track continues with the onslaught of melody, this time feeling like it was inspired by the late great band Level 42… and it makes me wonder if there wasn’t some nod to Level 42 in the naming of this band.
But whether inspired by Douglas Adams’ pursuit of perfection, the glossy production of Level 42 or the story-telling songs of  Genesis, I do believe 41POINT9 should have called themselves 100% because that's the success rate they have on this CD.
I confidently recommend this CD to those who love any of the bands mentioned, throwing in Journey, too…as 41POINT9 has the sound of a band ready to be heard by a much wider audience.
41POINT9 "Still Looking For The Answers" is available from the band's web-site HERE! (where you can also get lyrics and behind the scenes info about each song) ...and  from ProgRock Records HERE!
Peace n' proggy goodness!
FlyCoJoe
Posted by Joe "FlyCoJoe" Field at 10:01 PM No comments:

...that Flying Colors Comics & Other Cool Stuff first opened for business in Concord CA. The above shot was taken in 1990 and it shows how tight we packed things into the smaller space we had back then.

For more photos, please visit our Facebook Fan Page here! (No need to be a Facebook user to visit our Fan Page there... and it's another way to keep up with all the things going on around here.)

Many thanks go out to everyone who has supported us throughout the years!

Peace and health to you all!

FlyCoJoe
...and the Flying Colors Retailing Brigade
Posted by Joe "FlyCoJoe" Field at 8:02 PM No comments: