Libby and I just got back from a great trip to the other side of the Atlantic, visiting Ireland, London and Paris over the course of two weeks.

Along the way, we visited a number of world-renowned museums, including the Louvre and Musee d'Orsay in Paris, the British National Museum, National Portrait Gallery and Tate Modern Museum in London.

I saw many beautiful and historically important pieces of art in those museums. Picasso, Monet, Manet, Gaugin, Van Gogh, Klee, Klimt…the list goes on all the way to Leonardo DaVinci. Really breath-taking stuff.

In the Tate Modern, though, I saw one painting that left me feeling a bit blue. During the 1960s, the Pop Art movement, led by Andy Warhol, took the art world by storm. Warhol and others liberally "borrowed" from other avenues of pop culture to create work that has since become some of the world's most recognizable and valuable art.

Roy Lichtenstein was also a prime mover in the pop-art field. He made millions off of enlarging and re-positioning the work of famous comic book artists, like Jack Kirby, John Romita and Russ Heath.

Lichetnstein's "Whaam!" is a direct swipe from Russ Heath's All American Men of War comic published by DC Comics. Lichetnstein made million from it. Heath got nothing. That's why I've got the glum look on my face in this photo taken at the Tate Modern last week. 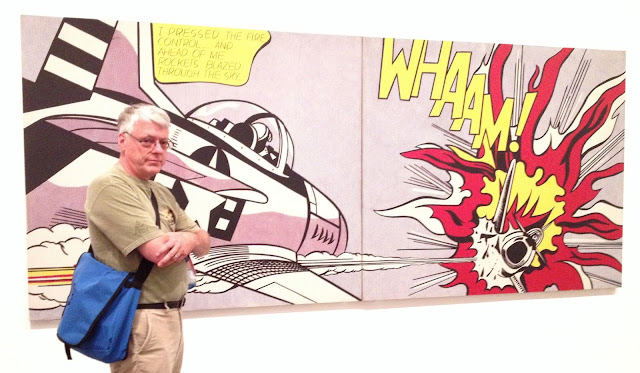 Read Russ Heath's own short comic about this HERE!

That leads me to inviting you our event celebrating the 98th birthday of Jack Kirby, the King of Comics---and one of the artists ripped off by Lichtenstein.

On Friday August 28th, Flying Colors is proud to once again take part in Kirby4Heroes, a campaign started by Jillian Kirby, Jack's granddaughter, who isn't even old enough to have met her prolific and uber-talented grandfather, who passed away in early 1994.

Please join us as we raise funds for the Hero Initiative, a great organization dedicated strictly to helping comic book creators in need. Hero creates a financial safety net for yesterdays' creators who may need emergency medical aid, financial support for essentials of life.

And be sure to pitch in when you join us on Friday August 28th. We've invited artists to come in a draw, so we'll likely have some art to sell, with 100% of the proceeds going to Hero. 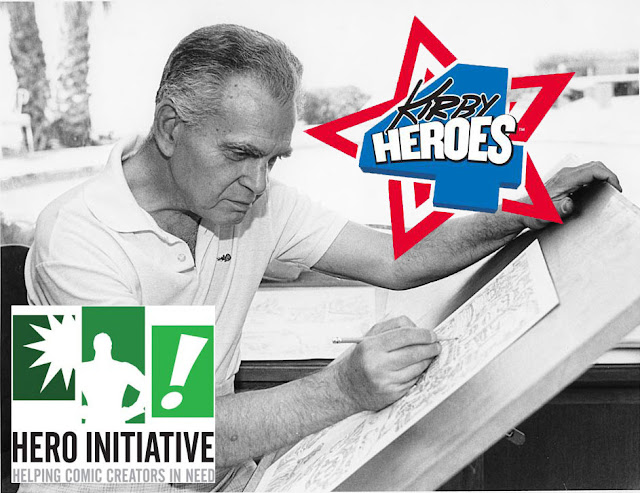 Posted by Joe "FlyCoJoe" Field at 5:44 PM No comments:

Please hit this link to check out our YouTube page!

We've posted a lot of videos for comics fans:
• Our interviews with comics professionals!
• A few short documentaries shot here at Flying Colors!
• Old Flying Colors TV ads!
• Footage from the early years of WonderCon!
• And our newest regular feature--- "Top of the Box" in which we open the first box of our weekly shipment to show you what cool items come out first.