We hope you're making plans to attend what will be a very fun and memorable event here at Flying Colors.

What: Flying Colors Summer Party
When: Friday July 3rd from 4pm-6pm
Who: Special Guests Raina Telgemeier (Smile, Sisters, Drama) and Dave Roman (Astronaut Academy, Teen Boat)
Where: At Flying Colors Comics & Other Cool Stuff, of course!
Why: Because comics are for everyone! And who better to have as guests than two of the top-selling graphic novelists, delivering stories that resonate with audiences of all ages!

We'll have some refreshments and sweet treats to go along with Raina & Dave's book signings and drawing games.

Posted by Joe "FlyCoJoe" Field at 2:37 PM No comments: 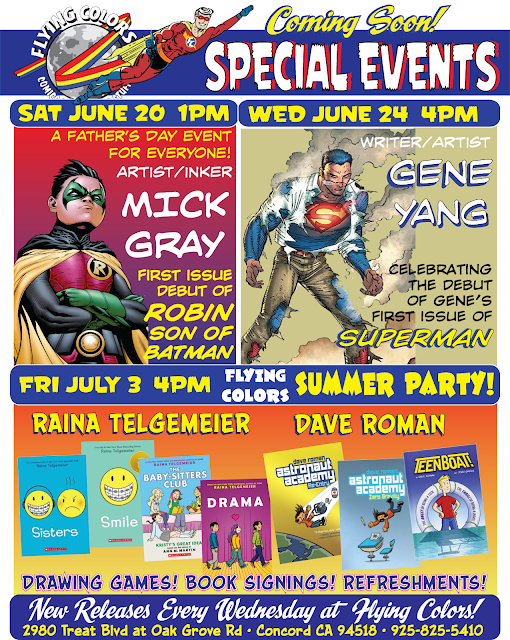 Posted by Joe "FlyCoJoe" Field at 6:27 PM No comments:

Flying Colors Top of the Box #1

What's the first item to be opened from our weekly shipment of comics & other cool stuff? Check out this one minute video and see what it is!

Posted by Joe "FlyCoJoe" Field at 4:56 PM No comments:

Email ThisBlogThis!Share to TwitterShare to FacebookShare to Pinterest
Labels: comics, inside out 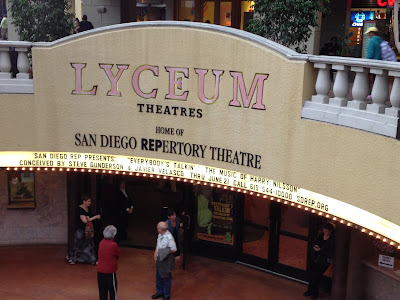 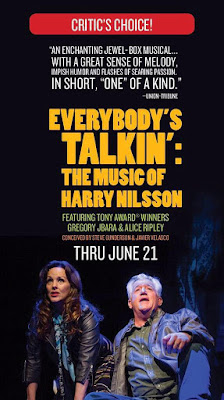 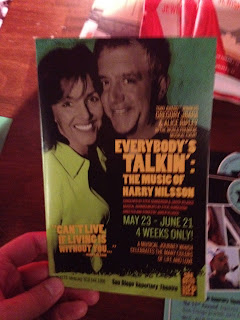 I'll state right up front that this piece will not be totally objective.

I've been a big fan of the music of Harry Nilsson since the early '70s. I attended the first HarryFest fan gathering in Los Angeles in 1998 and have been active on Nilsson internet groups pretty much non-stop since the '90s. So that's my warning not to expect a completely dispassionate review of the San Diego Repertory Theatre's production of "Everybody's Talkin': The Music of Harry Nilsson" from me.

Disclaimer aside, I went in having heard very little about the production, knowing next to nothing about its performers or the writer/producers who put it all together. All I knew was that this show would feature dozens of Nilsson songs from his oft overlooked but still richly productive career, the heyday of which ran from 1967-1979.

If you only know Harry from his Grammy-winning hits "Everybody's Talkin'" (the theme song from "Midnight Cowboy") and "Without You" then you know Harry the singer, but he didn't write either of those gems. As obligatory as those two numbers are in any conversation about Nilsson, it's his self-written material that sets him apart, ahead and beyond most of the pop music from his era.

The "story" hangs by a thread (and is really the only minor problem with this great show), tracing a lifetime of relationship ups and downs between Greg and Alice, from childhood ("The Puppy Song," "Good Old Desk," "Me and My Arrow") through adulthood and the relationship highs and lows that come with maturity. "Coconut," Nilsson's 1971 Top Ten hit, is performed by Ripley and Jbara in a way that couldn't be anticipated with wonderful comedic effect, while the bitterness of "You're Breaking My Heart" with its pointed expletive fit the breakup section of the story neatly and effectively.

Along with songs that center on relationships, there are other songs that show the depth of Harry's Nilsson's catalog, like "Salmon Falls" and "Ambush"--- the latter of which drew the biggest roar from the audience, appreciative of Kurt Norby's fantastic take on it.

The on-stage chemistry of Ripley and Jbara deserves attention and praise. Many of Nilsson's compositions feature a range of emotions and the show's success hangs in the balance of how those lyric messages are communicated not just in song but in movement and feeling. Ripley, in a scene in which she is not singing but on stage to react to Jbara, struck just the right emotional point/counterpoint. Jbara's casual baritone and easy-going manner on stage, coupled with the passion in the voices of Ripley and Norby, honored the source material in a way that pleased this fan.

Let me put it this way: I'll be first in line to buy this show's original cast recording if/when it becomes available.

The show runs at San Diego Rep through June 21. I hope to see announcements of many further engagements under bright lights. Nilsson's music deserves a wider audience and so does this warm and wonderful show.


"Think About Your Troubles"from the animated feature "The Point":