Friday December 28 is the 90th birthday of Stan Lee!
(It used to be that when Stan Lee was mentioned, most people outside of comics wouldn't have a clue who he is, while everyone in the world of comics would definitely know that Stan Lee is the co-creator of too many Marvel Comics characters to count, let alone name.

Working with such stellar Hall-of-Fame talents like Jack Kirby and Steve Ditko, along with John Romita, Don Heck, Dick Ayers, John Buscema... and so many more, Stan and crew created the foundation of the comics we still read and enjoy these days.)

Back on Stan's 83rd birthday, I wrote a bit about how I was personally introduced to him after being a fan for the 20 years before that.

Here's the deal--- many others will be much more rhapsodic than I could be in talking about Stan on this milestone occasion.  The fact is, I rarely talk to him anymore. Probably been two years, even if we have traded a couple of emails. Approaching him at conventions is also a daunting task these days, with his entourage of bodyguards and handlers escorting him from appearance to appearance.

Instead, let's go back to 1989's WonderCon, when I was his bodyguard and escort and his PR guy and his interviewer and his chauffeur! Have a look at this video:


The fact is, Stan Lee was my ticket out of a dead-end radio career and my entry into a profession I still love after more than 25 years in the business. Radio was just entering a brutal phase after broadcasting was deregulated by the Federal government. Family-owned radio companies were being bought up at astronomical prices by broadcasting conglomerates, leading to the awful state of local radio we have currently. When I got out of radio in 1988, locally owned broadcasting companies were in their death throes.


I feel like I escaped from one independently-owned business (radio) into another (comics) that is still home to thousands of entrepreneurs running their own comic book stores, not because the money is necessarily great, but because we're doing it for a good living.

I am indebted to Stan for his kindnesses along the way:
• He allowed me to "work" for him in promoting his wife Joan's first novel when her publisher was not doing a good enough job.

• When Flying Colors first opened in October of '88, Stan was on my store's answering machine with congratulations for the opening of the store and best wishs for my family.

• In early 1990, Stan agreed to come to Flying Colors to see this store I had talked about so much, though I'm fairly sure he wondered why in the world anyone would get out of a broadcasting career to get into comic book retailing! (He wasn't alone in that thinking--- I had to convince my father and my father-in-law that it was a rational thing to do)

• He was willing to accept my invitation to attend the Cartoon Art Museum's Sparky Awards to receive their Hall of Fame Award, even if that meant listening to me give his introduction speech!

More than anything though, I am indebted to Stan because the writer-editor-creator I admired as an 11 year-old kid in 1967 has always been kind to me, and always inspired to me to do the best I can in this comic book world.

Now at 90, Stan Lee is still out there, making deals, working long hours and more than ever loving the spotlight he has. He spent the better part of 40 years finding that spotlight--- and you can bet he doesn't want to get out of it any time soon. 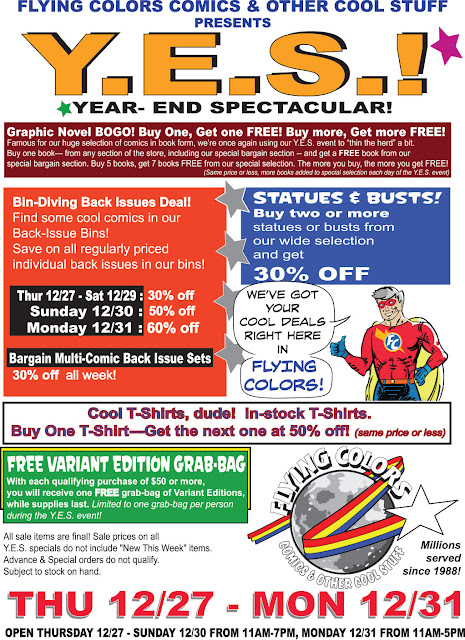 Posted by Joe "FlyCoJoe" Field at 5:58 PM No comments:

"Psst! The Mayans were wrong!" 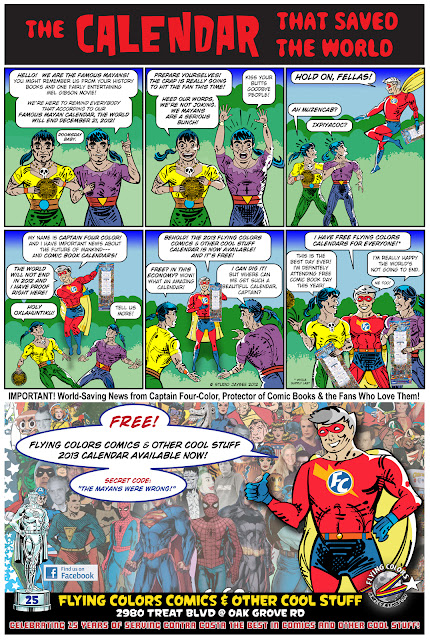 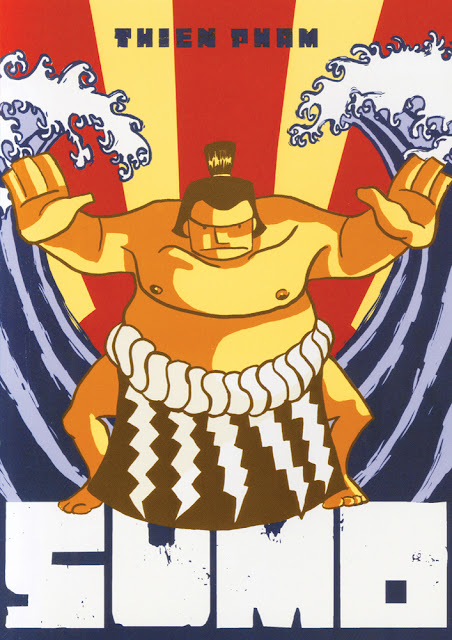