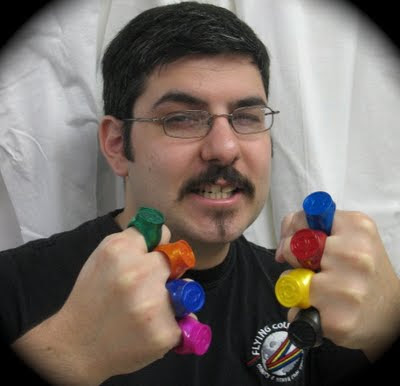 BLACKEST NIGHT, the mega-story that some have nick-named "DC ZOMBIES"is the DC's top selling comic series in quite some time. Your pals at FLYING COLORS are pleased to offer full sets of the spectrum of LANTERN Rings.

All we ask is that you sign up to reserve your set of rings, which are FREE with the purchase of seven BLACKEST NIGHT tie-in comics!

These will be available as sets while supplies last, so please place your order soon! 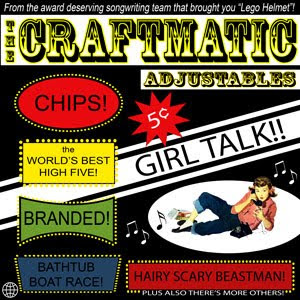 Simply put: I've got a CD to recommend to you.

The band is called CRAFTMATIC ADJUSTABLES and if that conjures up goofy late-night infomercials about electric beds, then my job is partially done.

Recommended especially if you like THEY MIGHT BE GIANTS and WEEN, this local band features an ex-FlyCo Retailing Brigade member, Karl Jan Lubbe. There's a lot of humor in this music. No other band that I know of has ever had the cajones to pull off a cover of the camp-classic Chuck Connors' TV show "BRANDED" before!

The CD is now available at NOT LAME RECORDINGS. Just hit that link and it'll take you straight to the CRAFTMATICS' page at Not Lame.

While at the Not Lame site, do me a favor and check out more of the amazing music available there from indie pop artists. There are thousands of song samples for you to give a listen to.

Most of this stuff you won't find in big stores like BEST BUY or Amoeba or Rasputin's--- but you will be richly rewarded with cool new music with whatever you buy at Not Lame. 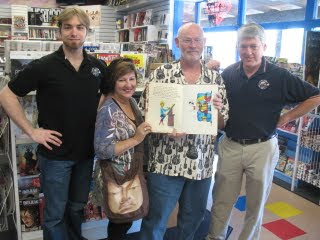 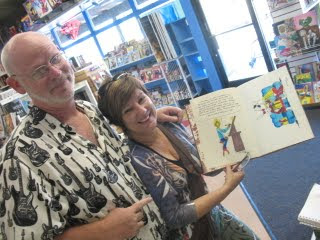 Almost a year ago, a guy came into Flying Colors wanting to sell me an old sketchbook featuring the early (and I do mean early) cartooning of Tom Beland, creator of TRUE STORY SWEAR TO GOD and a number of one-shots and special stories published by Marvel over the last few years.

You can read my post on buying that sketchbook HERE!

Tom, who lives in Puerto Rico with his lovely wife Lily, has been visiting family in the Napa area so he took the time to drop by Flying Colors today. The photos here are from their visit today.

(In the photo on the top from left are Marty, Lily, Tom and FlyCoJoe)

And now, Tom has his old sketchbook back... and Lily has some reading to do!

(and a plug: Read Tom's TRUE STORY SWEAR TO GOD, the funny, poignant and sweet look back on the beginnings of Tom and Lily's relationship. Now is stock at Flying Colors, natch!)
Posted by Joe "FlyCoJoe" Field at 6:24 PM 1 comment: