You can read my blog about the final fall of Tower Records HERE!

As most old-time music fans know, Tower Records was a chain of great shops (even though in this last years of the company, customer service was way less than stellar).

But music lovers really depended on Tower as a place to find not just current best-selling albums/cassettes/CDs, but as a place to discover music we didn't even know we wanted.

Every year, Tower would produce a poster to give away to anyone visiting their stores. So when Tower was on the slow death march to shutting down, I was a bit bummed that the tradition of getting their annual poster was going to end.

So, I thought, let's begin a Flying Colors' tradition to pick up what Tower dropped... but do it in our own comic book lovin' style!

The first year of the Flying Colors poster, 2007, we went with an all John Romita Jr look.

JRJR had done a commission for us featuring several Marvel characters on the roof above Flying Colors. We made that the centerpiece of the calendar (and our exclusive cover to Amazing Spider-Man #666)... and that's how it started.

Over the years, we've distributed thousands of these poster calendars every year to schools, libraries and to FlyCo Faithful.


Thanks for reading... and please share this with your friends!

As always, more Comics & Other Cool Stuff are on the way!

I was recently contacted by the good folks at SyFy Wire. They were putting together a feature about Marvel Comics' SQUADRON SUPREME series, so they asked to use a screenshot from my 1988 interview with the late writer and editor Mark Gruenwald.

And HERE's my original interview with Mark Gruenwald from WonderCon 1988 in Oakland CA... one of a very few interview videos with him. Mark is a well remembered, highly regarded writer and editor for Marvel in the '80s. Besides Squadron Supreme, his Captain America run is still sought after...and it's still a fun read! 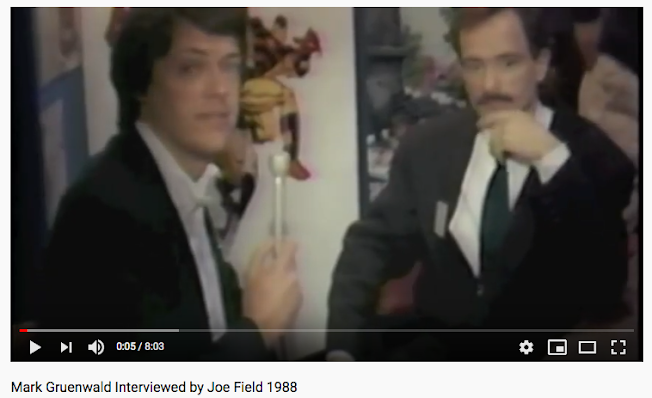 Posted by Joe "FlyCoJoe" Field at 2:12 PM No comments: