In the beginning
(actually before the beginning!)...
Did you know the original concept for Flying Colors was going to be called Heroes Corner? It's true.

Way back in the mid '80s when ideas were being formulated for the Field family comic book business, the first idea was to do a combination comic book shop and old time '50s soda fountain.

Once we took a look at the actual costs of doing that grand plan, we summarily ditched it. At the time, it likely would have added another $100K to our opening and operating costs. And just think of trying to keep comics in nice shape with all that sticky ice cream around!

I can hear someone asking "Is this comic mint?"
"No, but it has a little chocolate on it..."

Long story short, here are a couple of the earliest (and rejected) logo ideas for Flying Colors Comics, the Superstore of Comics & More! These logos are amateurish to say the least, but there's a lot of energy that went into every bit of the business that became Flying Colors.

So why did we name the shop Flying Colors? The term "passing the test in flying colors" means to do everything top-notch and with distinction. There's a nautical history behind the phrase and it comes from a time when ships would return from battle with their "colors" (another word for flags) flying to show victory was achieved.

As a comics reference, "flying colors" is a subtle way to refer to the colorful costumes worn by super-heroes with the power to fly... hence, "Flying Colors."

We try to do everything the best way we can with the hopes of winning your loyalty and business as Flying Colors Faithful... and you can still get your ice cream next door at Baskin Robbins!

We thank you for continuing to be supportive of what we do here to bring a world class comics shop to Concord, to Contra Costa County... and to the Cosmos! 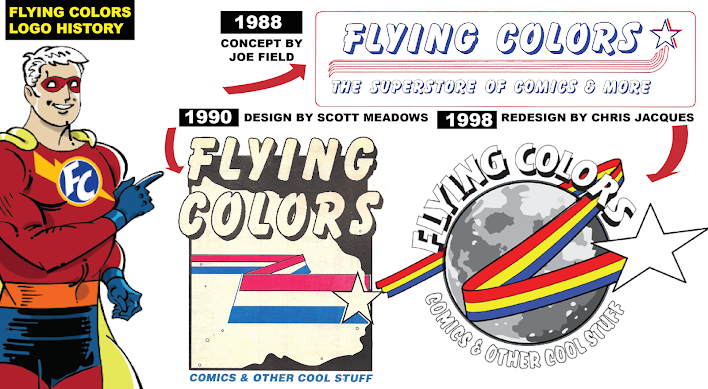