FlyCoJoe & Dan Brereton Look Back at the Early Days 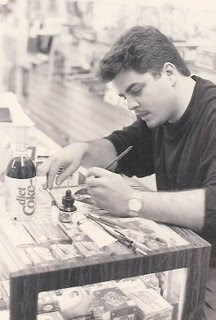 The 19th Anniversary of the opening of FLYING COLORS Comics & Other Cool Stuff is upon us---and we're celebrating with a special event with artist Dan Brereton and the World Premier of NOCTURNALS Volume One: Black Planet & Other Stories, this Saturday September 29th from 1-4pm. I really hope you can join us.

Since Dan was one of our Flying Colors' Faithful all the way back to the beginning, I asked him to share some of his insights into those early days. I've added some art and photos to Dan's recollections, and I'll be interjecting the photo credits and a story or two of my own.

DAN:"I not only shopped at Joe's store, a big part of my career took wing there. I met Stan Lee there when Stan did a very exclusive appearance at Flying Colors just prior to an early WonderCon." 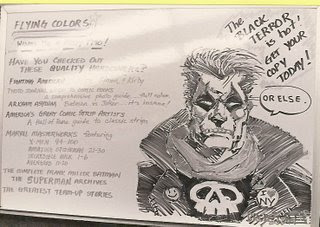 FlyCoJoe: Most FlyCo regulars know that every week we post all the New Releases and Staff Picks on two erasable white-boards. Back in '89, Dan was in the store at the time we were changing the New Releases' board ---and he did this special BLACK TERROR art. I hated erasing that one!
DAN:"Joe introduced me to people from Diamond in his store the month my first painted book, THE BLACK TERROR hit the stands. He made me feel like a real professional then. In fact, Joe treated me like a pro long before I'd ever been published, and he was very supportive of many local talents such as Jeff Johnson and Ken Hooper, who also shopped at FLYING COLORS." 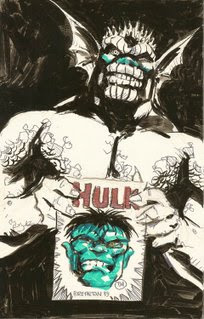 FlyCoJoe:Dan did a number of official in-store signing events, starting with the debut of the BLACK TERROR series from Eclipse Comics in '89. Pretty regularly, though, when Dan would come in to get his weekly comics, he'd ask me for something to draw on. That's how I came to own some pretty unique Dan Brereton art, like this watercolor "sketch" of the Abomination enjoying a new HULK comic book.

DAN:"While I was illustrating the first Nocturnals graphic novel, Joe let me use his office to photograph two of his then employees, who modeled for a scene which appears in Nocturnals Black Planet #1."

FlyCoJoe: Here's another great example of Dan's watercolor art. After I became used to having Dan ask for something to draw on---and he'd use pens or sharpies of whatever markers we had laying around here, the idea hit us that maybe we should have a set of watercolors and a brush on hand, so Dan could really cut loose. This BATGIRL painting on a comic backer board is one of my favorites. 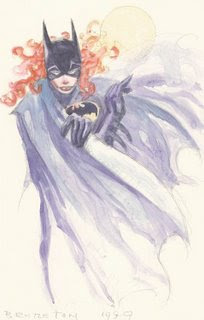 DAN:"Later, when I would come into his shop, Joe would be across the room selling a customer on my latest book, and then send the guy over to get a signature from me--- and I was only there to pick up the latest EIGHTBALL or something."

FlyCoJoe: This last photo was taken in 1990 when then Amazing Spider-Man artist, and soon to be Image Comics' founder Erik Larsen was at Flying Colors for a signing. Dan was there, too... he's on the right, Erik is in the center---and that long-haired guy on the left is an earlier model of FlyCoJoe. 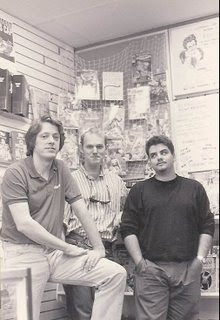 That's our stroll down Memory Lane for today. I want to thank Dan for contributing to the history and the health of Flying COlors Comics & Other Cool Stuff.

Please accept my invitation to join us on Saturday September 29th from 1-4pm for the World Premier of Dan Brereton's NOCTURNALS Volume One: Black Planet & Other Stories.