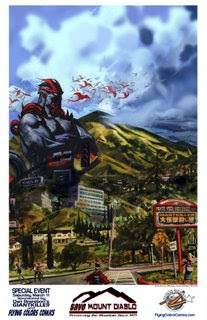 It Takes a GIANTKILLER (and Artist Dan Brereton!)----

Flying Colors Comics & Other Cool Stuff and Save Mount Diablo host artist Dan Brereton for a book signing at Saturday, March 11, 2006 at 2pm, celebrating the newly released edition of “GIANTKILLER”, set on Mt. Diablo, in which monsters (a metaphor for local development pressure) ravage the Bay Area.

The first 50 people at the book signing event will receive a signed illustration created by Brereton and published by Flying Colors Comics for this event. The proceeds from book sales at the event will benefit Save Mount Diablo and its land conservation efforts.

Created by renowned artist Dan Brereton, the six-part GIANTKILLER series was first published in 1999-2000 by DC Comics, along with the "Field Guide to Giant Monsters." The trade paperback edition is published by IMAGE Comics, Inc. of Berkeley CA.

Brereton, who grew up in Contra Costa County, says that GIANTKILLER’s destructive alien monsters are a metaphor for the development he saw around Mount Diablo. “I grew up in the Mount Diablo area and the family used to drive up to the top a lot when I was a kid. I camped out there one day with friends as a teen, and I’ve been back many times since as an adult. The mountain’s always been a part of my life.”

Brereton is famous in the comic world for his art and writing in projects including Nocturnals, Thrillkiller, Justice League, Spider-Man, the Simpsons and Buffy the Vampire Slayer. He produces cover art for an even wider array of projects. Dan lives with his family near the Sierra Nevada mountains, working in comics, as well as mainstream illustration, TV and film. His work can be found in comic book stores around the world, Amazon.com, and on his site: www.nocturnals.com

“My brother and sister and I used to catch snakes and lizards and stuff. We loved all the wildlife out there in the San Ramon and Diablo valleys, and it was sad to watch houses and businesses spring up so quickly. So I slowed that way down in my story. On one hand, it was a fun, giant monsters invade the Bay Area story and, on the other, a subliminal need for my childhood self to reclaim the adventure of the place I enjoyed in my youth.”

The GIANTKILLER Series and Background
‘When giant alien beasts emerge from a wormhole that collides with Mount Diablo, attacking the San Francisco Bay Area, the U.S. Military responds by bio-engineering a human-monster hybrid to stop them – a GIANTKILLER!’ Thus reads the publicity for a new trade paperback from Image Comics collecting the incredible art of creator Dan Brereton’s GIANTKILLER.

“Jack (the Giantkiller) shares both Monster and Human DNA, which is confusing for him. On the one hand he’s been trained to follow orders, a modern-day samurai who lives only to fight for his master. But the monster in him craves destruction and chaos. As he travels toward his eventual final battle on Diablo’s lava-spewing summit (with a titanic beast called Rroar), he must come to terms with both sides of nature. If he can’t balance the dual legacies, he’s doomed, and the Bay Area with him.”

“Returning to the Diablo Valley repeatedly since the late 1970’s has been one shock after another. The area has grown in ways that are both exciting but also shocking. So much of the open rolling foothills are covered with developments and malls, its very sad.”

“On one hand growth is supposed to be positive, and as a bedroom community, Contra Costa is ideal. But I’d take the countryside back in an instant if I could. I can’t share most of the old trails and ponds and giant trees where we used to play and have adventures. Kids need wide open spaces – those were the places I used to dream and imagine. You don’t get much of that in a Target or stuck in traffic. I think this is why I was anxious to contribute something to SMD’s cause. It was great to discover others who feel the way I do about preserving as much of the area’s beauty and habitat as possible.”

“We were thrilled to discover Dan and Giantkiller,” said Ron Brown, Executive Director of Save Mount Diablo, “Contra Costa has its own dual legacy—a strong economy and intense development pressure, and spectacular and fragile resources—the metaphors in Giantkiller are powerful ones. Plus they appeal to different parts of our community, and we like doing outreach in as many ways as possible in order to be effective.”

The book signing will take place on Saturday, March 11 at 2 pm at Flying Color Comics in Concord. Owner Joe Field said "My parents moved our family into central Contra Costa in 1956,” said Field, “so Mount Diablo has always been for me a touchstone of the immense natural history of this area. Now my own family lives in Diablo’s shadow near the Concord-Clayton border, and we regularly hike Diablo and revere its environment.”

“I've followed Dan’s art career from the time he did his first professional store signing here in 1989. GIANTKILLER is an important work, serving dual purposes of raising awareness of Mount Diablo’s fragility in the face of rampant development while also being a massively entertaining story with singular and striking art.”