As of this blogging, WonderCon tickets are rapidly selling out here. By closing time tonight, we are completely sold out of Friday/Saturday tickets.

WonderCon is once again shaping up to be a great show.

Please feel free to hit the 'comments' link on this blog to share your WonderCon experiences, from the 2009 event as well as WonderCon's past.

FlyCoJoe
Posted by Joe "FlyCoJoe" Field at 6:30 PM No comments:

This Weekend--- it's WonderCon!

Answers to Frequent Questions About WonderCon

Is Flying Colors selling tickets to WonderCon?
Yes! And we will sell them until we run out or until the weekend event is over, whichever comes first. If history is any indication, we will run out of tickets this week, so if you'd like to save a few bucks and some time in line, be sure to pick up your tix in the couple of days. 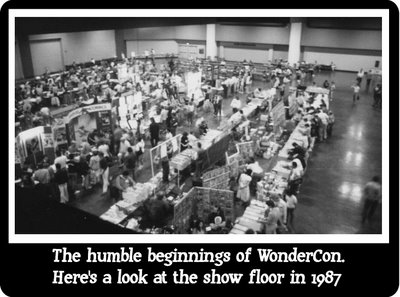 Also, Flying Colors was never set up to be a convention dealer. Instead, we keep our great selection of comics & other cool stuff available to our loyal base of supporters that come into our Concord store. Heck it's like a convention every day here at Flying Colors!

Is there a schedule of events listing for this weekend's show?
The Who, What Where and When of WonderCon is just a click away, so hit the link HERE!

Will there be any FlyCoJoe sightings at WonderCon?
FlyCoJoe is on a panel with Brian Hibbs from Comix Experience in San Francisco. Called "Everything You Always Wanted to Know About Comics Retailing... But Weren't Afraid to Ask!", it'll be an informative hour looking at the retail environment in the comics' biz these days. That'll be Friday from 2-3PM. 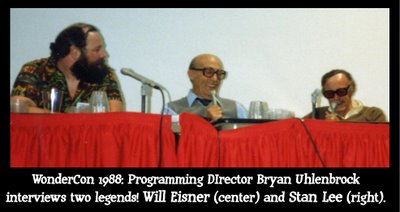 Anything else?
Randy Myers of the Contra Costa Times writes a graphic novel review column. In yesterday's column, Randy shared another round of reviews worth reading, along with some of the comics' professionals he's most looking forward to seeing at WonderCon. Read his column
HERE!

(ps: Since we're going crazy with links here, here's one more for you. Click HERE!
to see Bob Segarini's latest column on FYI Music Canada. In this latest column, Bob gave his choices for the Top Ten Albums that influenced him in his youth. He then asked his readers to share theirs---and FlyCoJoe couldn't resist the "blast from the past" music challenge.)
Posted by Joe "FlyCoJoe" Field at 12:50 PM 1 comment:

ITEM, GUARANTEED READ!--- Occasionally, there are excellent titles that seem to slip by unnoticed, despite the best efforts of the FlyCo Retailing Brigade. 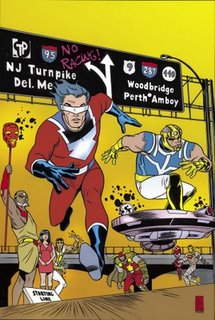 The FlyCo Retailing Brigade is so sure you're going to like JERSEY GODS that we have made it a "GUARANTEED READ!". Ask us about it next time you visit Flying Colors.

ITEM, FREE! --- Flying Colors Comics is pleased to be among the first comic shops in the country to be taking part in the innovative promotion from Top Cow Productions called "Let Us Win You Over".

The premise is simple. Top Cow produces comics that feature some of the industry's most detailed art to go with some darker story-lines aimed at readers older than 16. 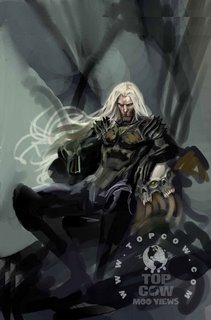 Today, Flying Colors received a boatload of copies of DARKNESS #75, a great "jumping on" point for new readers. Featuring art by such talents as Joe Benitez, Fraser Irving, Lee Bermejo, Dale Keown, and Stjepan Sejic, DARKNESS #75 is a packed, thick issue, with a cover price of $4.99... except that at Flying Colors, this comic book is FREE, while supplies last.

So you may ask--- why is it free? Because Top Cow Production, the publisher of DARKNESS is working directly with comic book retailers (hey, that's us!) to find new readers for their unique brand of story-telling. If you like the UNDERWORLD movies mixed with a bit of the SOPRANOS, come in and get your FREE copy of DARKNESS #75.

ITEM, HOPE SPRINGS ETERNAL! --- FlyCoJoe (and the beauteous FlyCoLibby) attended Fan Fest at the ballpark at Willie Mays Field at McCovey Cove in San Francisco last Saturday. It was a gorgeous, warm day, just right for a ballgame--- and there was a mini-ballgame played by toddlers at the mini-park behind the left field bleachers. The photo here is a special one for FlyCoJoe, shown with his cousin Burt. 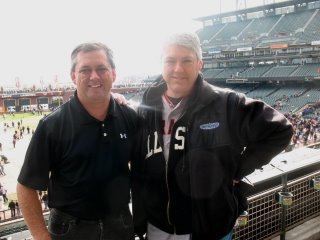 This is the first time in close to 40 years that Burt and Joe got together, so we re-introduced ourselves to one another and found that we both share a love of baseball and we both share a great uncle who made it to the major leagues back in the '30s and '40s. Read about him HERE!Our fathers were brothers with about the same age difference as there is between FlyCoJoe (the old one, like my dad) and Burt (the young one, like his dad). Looks like the start of a long friendship!

Here's my prediction for baseball this year:
I predict there will be a Bay Bridge Series (from April 2-4, just before the regular season starts).
ITEM, COMICS BIZ! --- FlyCoJoe was recently interviewed for a report on the economics of comics and the prospects of changing cover prices. Check it out now at NEWSARAMA! 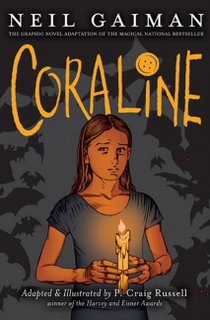 ITEM, MORE BIZ!--- I know a number of comic book retailers and retailers-to-be read this blog, so I want to point your attention to two events. The first is coming FEB 27, 28 and MAR 1 at the Moscone Center in San Francisco. It's NorCal's largest pop culture/comics convention. It's WonderCon!.

My friend and retailer compatriot Brian Hibbs from SF's cool Comix Experience and FlyCoJoe will be featured in a chat-fest called "Everything You Always Wanted to Know About Comics Retailing, But Weren't Afraid to Ask!" from 2-3PM on Friday FEB 27.

As board members for the comic book industry's only retailer trade association, Brian and I will also be a part of ComicsPRO's Annual Meeting, March 19-21 in Memphis TN. All retailers are welcome...and if you are a comics retailer who cares about the future of your chosen profession, you really need to be there. Get the info HERE!

I've occasionally blogged here about music--- what I like, what I don't like and what shows I've seen. Well, this post is a bit different. You see, my long time pal and former KJOY-AM (Stockton CA!) compatriot, Jerry Fuentes, has just published a book about his favorite band, country-rock pioneers POCO.

And since today is Groundhog Day, it's just a tad ironic that Jerry's book is published through Groundhog Press. What follows is the official press release for Jerry's book, which I heartily recommend to any fans of music biographies.

Stockton, CA – Unearthing the fascinating story of pioneering American country-rock band Poco, noted rock historian Jerry Fuentes has written LEGEND: The Story of Poco (312 pp., pb, $19.95). The band’s first comprehensive biography, LEGEND: The Story of Poco enlightens with an accurate portrait of this influential band, with a revealing look at the obstacles and frustrations of the rock and roll world.

Based on numerous interviews with band members and associates, LEGEND: The Story of Poco unveils many previously unreleased details of the band’s history from their creation in 1968 out of the ashes of the legendary Buffalo Springfield. To this day, Poco remains a popular concert act throughout the U.S. and Europe.

In addition to his own writing, Jerry Fuentes also provides research support for other authors such as Pete Long, Christopher Hjort, Doug Hinman, and John Einarson. Fuentes has written articles about Buffalo Springfield, Neil Young, and Poco for Goldmine, Broken Arrow, and A Good Feeling to Know. Fuentes also operates a website documenting Poco’s extensive concert history at PocoDeliverin.com.