New Releases' Day is THURSDAY MAY 31 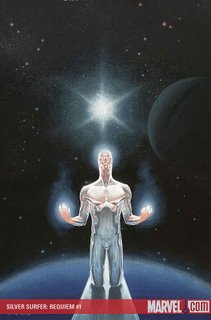 Due to the Memorial Day holiday on Monday May 28, our shipment of Comics & Other Cool Stuff will be delayed by a day this week.

New Releases' Day this week will be THURSDAY MAY 31.

New releases this week include the first issue of SILVER SURFER:REQUIEM (pictured here).

Hope to see you soon in FLYING COLORS!

FlyCoJoe
Posted by Joe "FlyCoJoe" Field at 6:00 PM No comments: 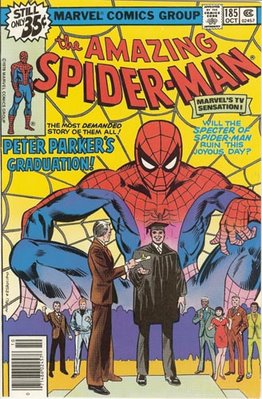 Congratulations to all the graduates of 2007!

While trolling on-line for something inspirational to share with this year's graduates, I found an excellent commencement address that has deep roots in the world of comic books.

Check out Hollywood producer Michael Uslan’s commencement speech to grads at Indiana University, from May 2006. You can read it
HERE!

His advice to "follow whatever your passion may be in life and do something you love" is a pretty easy thing to say and a very difficult thing to actually do. But it's worth pursuing!

My advice to 2007 graduates? Simply be open to all the possibilities. Working hard and having fun don't have to be mutually exclusive. It's important to learn that it's far more rewarding to have a good life than to have a good career.

And remember, much like the monthly payment on a Ferrari--- with great power comes great responsibility.

FlyCoJoe
Posted by Joe "FlyCoJoe" Field at 3:42 PM No comments:

Hey, Mom! I Made it to Congress! 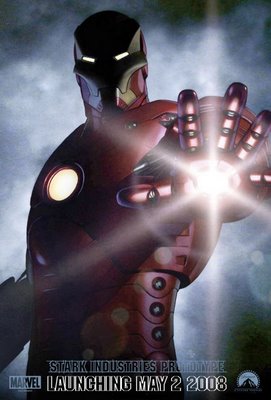 Well, not really, but did you know that my little Frankenstein --- FREE COMIC BOOK DAY--- did make it to the halls of Congress?

To see a copy of the House Resolution, click on the "FCBD" link to the left!

As for FREE COMIC BOOK DAY next year? I'm already being asked what date it'll be. Well, pardon the pun, but it's looking "IRON"-clad that the 7th Annual FCBD will be Saturday May 4, 2008, just a day or two after IRON MAN opens in theaters everywhere.

Between now & then? Tons of Comics & Other Cool Stuff, lots to talk about, some surprises here and there. Be here for the fun!

FlyCoJoe
Posted by Joe "FlyCoJoe" Field at 1:34 PM No comments: 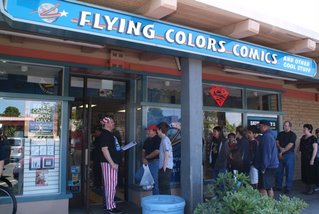 Wow! It's taken me 10 days to blog about the party that was FREE COMIC BOOK DAY 2007! Let's get started by pointing you to a bunch of photos from the event. You can find 'em HERE!

Before I announce our FREE COMIC BOOK DAY Prize Winners, kudos need to go out to those who made FCBD at FLYING COLORS great this year!

First, I want to thank our Special Guest--- the ultra-talented artist J H WILLIAMS III. He graciously signed hundreds of copies of the FCBD edition of Justice League of America #0, as well as countless numbers of his comics, trade paperbacks, etc.

Be on the lookout for JH's art in BATMAN #667-669, coming soon. Lucky enough to see some of the original art from the story, I strongly urge everyone to check this out when it's published. 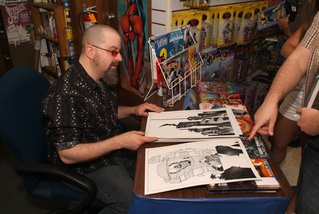 Also, I want to thank our Special Guest at our post-FCBD Wednesday May 9th event--- ROBERT KIRKMAN, writer of Image Comics' WOLF-MAN comic, as well as the wicked cool WALKING DEAD, INVINCIBLE, Marvel's ULTIMATE X-MEN and ANT-MAN. Robert was joined in-store by Image Comics' Marketing Guru, Mark Haven Britt, who has a graphic novel of his own coming in July called FULL COLOR (from Image, natch!). 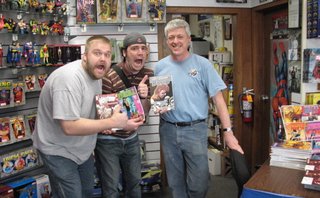 I also am very grateful for the good work of the whole FLYING COLORS' Team on FCBD! On "normal" days around here, you might see three of us---but on FCBD, we had a team of 12 going all day long. My sincere thanks to all of them for making the day a smooth one, not only for the 1000 attendees, but for me as well.

Thanks to Paul Adams from ADAMS DIGITAL VIDEO for shooting the FCBD event. And thank, too, to Oscar Benjamin, our official photographer for FCBD (and the former photographer for WonderCon, back in the old Oakland daze) and to FLYING COLORS' web-master supreme Alan Alvaro!

And I send a special "thank you" to all of you who attended the big event. We hope to see you every week for more comics & other cool stuff!

OK, now how about those prize winners I mentioned? 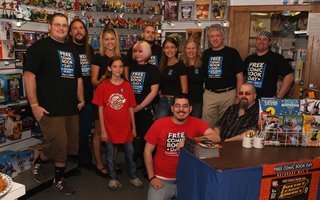 Congratulations to all of you! You'll be receiving your prize redemption letters in the mail very soon!

Finally, I hope you'll take the time to hit the "comment" link and share your stories from Free Comic Book Day, whether you were here at FLYING COLORS or at any of the other 2000 locations in more than 25 countries all over the world! Let's hear from you, OK?

(Next time: FCBD Goes to Congress!)
Posted by Joe "FlyCoJoe" Field at 3:41 PM No comments: 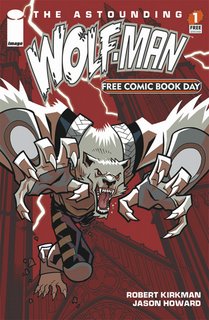 That's right--- Wednesday May 9th from 5PM-7PM, ROBERT KIRKMAN will be here signing copies of his new WOLFMAN comic from IMAGE. This cool new title was available for the first time on FREE COMIC BOOK DAY last Saturday. We'll have more FREE copies to give away when ROBERT KIRKMAN visits the store tomorrow.

In addition to signing the FREE edition of WOLFMAN, with the purchase of any other KIRKMAN work during the signing, we'll be giving away FREE copies of
KIRKMAN's IRREDEEMABLE ANT-MAN
comic book . 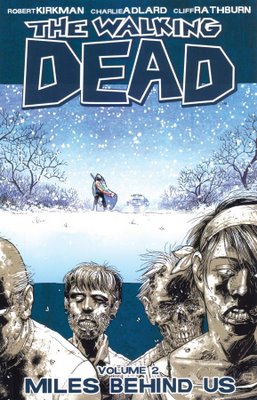 So if you're one of the very few that still hasn't gotten into the "LOST meets Night of the Living Dead" vibe of WALKING DEAD, this is good opportunity to jump on board. Or if you're more of a super-hero fan---and want to see an unusually independent take on the genre, give KIRKMAN's INVINCIBLE a shot.

The spirit of FREE COMIC BOOK DAY lives on as we carry on the good times with this special event. Please join us, OK?

FlyCoJoe
Posted by Joe "FlyCoJoe" Field at 4:52 PM No comments: 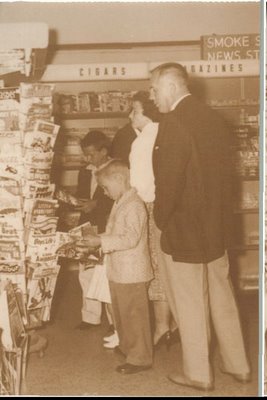 Saturday May 5th is fast approaching---- and that means FREE COMIC BOOK DAY is almost here.

This shot is taken from the late '50s, when drugstores featured one spinner rack of comics. When you visit FLYING COLORS this Saturday for FREE COMIC BOOK DAY, feast your eyes on rack after rack of comic books, trade paperbacks, comic strip collections, back issue comics----there's something cool in stock for every reader! after all, we've got your cool stuff right here in FLYING COLORS!

About FCBD: I've been asked countless times over the last few weeks "How early should I get to FLYING COLORS for FREE COMIC BOOK DAY?"

If history is any indicator, we'll have comics to give away all day long, even with the likely prospect of a long line at the start of the event. However, we're old pros at moving the line pretty quickly, so if you do see a line, don't be frightened away by it.

We will be giving away comics from 11am-7pm--- but not knowing how big a crowd there will be, we can't guarantee that specific FCBD comics will be available all day. What we will be doing, though, is a drawing for a complete set of the 40+ special edition FCBD comics. Since there is mature content in some of the comics, the drawing will be open only to those 16 and above. There will be other prizes open to all ages--- including t-shirts, collectibles and a $100 FLYING COLORS Shopping Spree!

FlyCoJoe
Posted by Joe "FlyCoJoe" Field at 6:22 PM No comments: 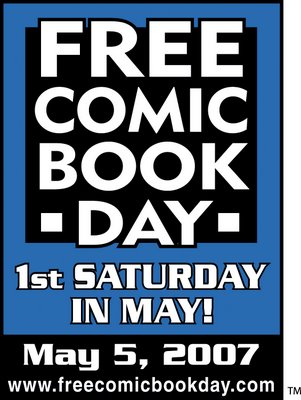 The party of the year---FREE COMIC BOOK DAY--- is coming up this Saturday May 5th ("Cinco de Comics" at FLYING COLORS and some 2000 other comic book stores in the U.S and more than 20 countries around the world!

We'll be giving comics away from 11am-7pm--- but be sure to get here early for the best selection!

FLYING COLORS will also be giving away a limited number of special bonuses to the early-birds, including FANTASTIC FOUR: Rise of the Silver Surfer mini-movie posters and BATMAN HeroClix.

And while we're on the subject of comics' fun, check out this cool video I found on YouTube.com:

FlyCoJoe
Posted by Joe "FlyCoJoe" Field at 3:09 PM No comments: