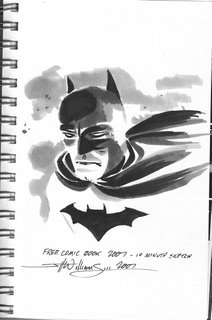 Lots to get caught up on here! I've had most of these images sitting on my desktop for better than a month, so please bear with me as I share some stories that might not qualify as "news", but certainly give you an idea of some of the things I've been up to lately.

First up, check out the sweet JH Williams III BATMAN "sketch" he did for me on FREE COMIC BOOK DAY. Yeah, I know that was back in early May, but here's what makes it "news". The original JH Williams art we were privileged to see on FCBD is now showing up in the pages of BATMAN. Check out issues #667-669 for a beautifully illustrated JH Williams' story, written by GRANT MORRISON. I made sure to place a strong order for this 3-part story, so check it out and feast your eyes on some of the best comics' art you'll see this year! 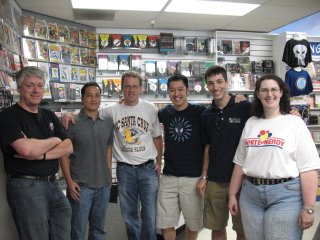 ITEM: In the photo to the left is a group of MBA students from UC-Davis' San Ramon extension. You may recognize Flying Colors' Faithful Jonathan Chan, production artist from IMAGE COMICS among the MBA students. The group was here at Flying Colors doing research on a comics-related MBA student project. Not that it surprised me, but Jonathan and his group scored a nice grade for their project, which was creating the business plan for a new (but fake) comics' publishing company. When they did their presentation, among several other presentations from other groups of MBA students, the only project anyone wanted to talk about was the one about comics! 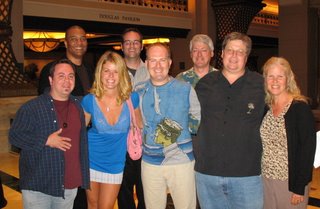 SAN DIEGO SNAP SHOTS: The next bunch of photos, some definitely clearer than others, all were taken at last month's Comic-Con International:San Diego.

One of the highlights for me (and Libby) was the dinner we attended with a great group that included DC's VP-Sales Bob Wayne, Lone Star Comics general manager Chris Powell, writer Bill Willingham (FABLES among others), artist Mark Buckingham (also FABLES, among others) and several other great folks. Well, for some reason, I didn't get any pix of that dinner, but a couple of nights later, in lobby of the Hyatt hotel, we ran into Bill Willingham, Mark Buckingham and some of their friends and colleagues---and since Jenny is a huge FABLES' fan, I took this shot of her and Libby with the FABLES' crew. 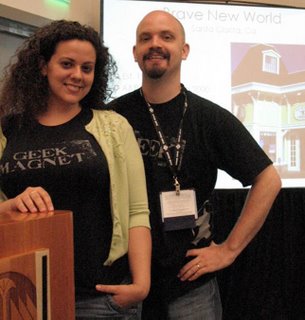 Here's a shot of retailers Atom! and Portlyn Freeman from Santa Clarita CA's Brave New World Comics. This shot was taken just after the dynamic duo had given a stellar presentation to a group of retailers on their success at building a community of comic fans in their store. Next time you're near Six Flags at Magic Mountain (I think it's still called that these days), stop by and see Atom! and Portlyn at Brave New World. 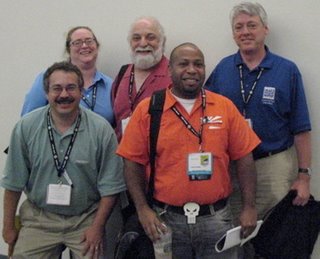 At the San Diego Con, I organized the track of retailer programming, under the auspices of ComicsPRO, the retailer trade group. The one program we did that was open to all convention attendees was "So You Want To Be a Comics Retailer?" Many dream of having their own comic book specialty store, so we wanted to lend our years of experience to those just exploring the opening of new stores.

I was aided and upstaged by a stellar group of retailing compatriots, including Nancy McCann from Comics Unlimited in Westminster CA, Joe Ferrara from Atlantis Fantasyworld in Santa Cruz CA, Derrick Taylor from Comic Oasis in Las Vegas NV and Dave Hawksworth, outside sales manager from Diamond Comic Distributors. We had close to 200 attendees at that seminar, so it's clear there are lots of folks interested in having their own shops. Dare to dream and work to make it reality! 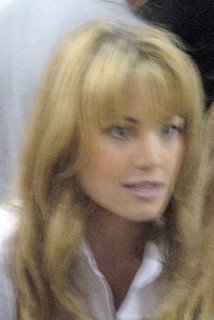 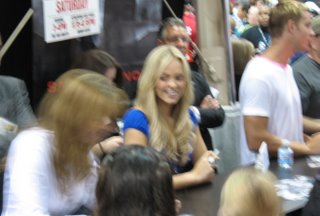 OK, these last two shots are really blurry, I know. I had only a few hours to try to see the entire 500,000 square feet of the exhibit hall.

On Saturday of the con (the hugest, most crowded day of the event), I ran into the Warner Bros. set-up, with a signing by some of the cast members of the SMALLVILLE TV show. It just happens to be one of the favorite shows Libby and I follow, so in the madness and the crush of tons of people (and I do mean 'tons') trying to get close to the booth to get autographs and maybe a couple of seconds of time with the show's stars, there I was with my digital camera held high and snapping away.

What these fuzzy shots show are a single shot of Erica Durance (Lois Lane, yowza!)---and a shot of Erica with two of the other actors from the show. The blonde girl will be featured this season on SMALLVILLE as Supergirl (and she does look like a super girl!) and the impossibly good looking guy is the actor who plays Oliver Queen/Green Arrow.

OK, I've caught up. Now it's your turn. Send me your thoughts by clicking on the "comments" button. I'd love to hear from you!

FlyCoJoe
Posted by Joe "FlyCoJoe" Field at 6:30 PM No comments:


What a packed weekend!

Friday night was the Flying Colors after-hours event celebrating the comings and goings of our ever-fantastic staff.

On the "goings" side: Jenny is off to training with Southwest Airlines and Brian is off to run his family's business in Benicia. On the "comings" side: We have two new staff---Marty, who's been here for the last month or so and Jazmine, who is now in her third week! And Friday was Andy's birthday, too.

We had a comfortable crowd of 75 or so for the Friday evening event. Cindy performance wound up starting at about 9:30---and I'm happy to share with you one of her songs. This may have been the first time ever that comic-related statue boxes served as a lyrics' easel, but it worked. I hope you enjoy the song.

The party broke up around midnight (scheduled end was 10pm!), we did a little cleaning, and I wound up not getting to sleep until 3:30 am. That wouldn't have been so bad if Libby and I didn't have to leave the house at 7:30am to catch a plane from the San Francisco Airport on Saturday morning, so I got about three hours' shut-eye before our flight to Eugene Oregon.

The reason for the quick trip to Oregon was the recent passing of Libby's Uncle Frank Hart--- an amazing man with a very full life! We were there to take part in two memorial events for Frank---the first at the Hart home in Winston OR and the second, on Sunday, a public memorial tribute at WILDLIFE SAFARI, also in Winston. 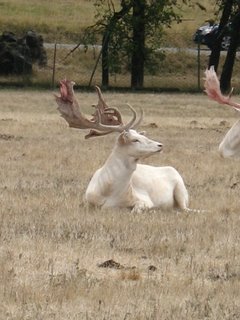 Frank was the founder of WILDLIFE SAFARI, an amazing 700 acre drive-through spread of animals from around the world. Everything from rhinos and hippos, to turkey vultures, black bears, cheetahs, zebras and many animals with such exotic names I doubt I'd spell them correctly here. WILDLIFE SAFARI is one of the most successful breeding places for the African Cheetah, with more than 150 live births of Cheetah cubs over the last 30 years.

Frank was also a World War II hero, earning the prestigious Silver Star. He was also in charge of the American guards at the Nuremberg Nazi war trials!

All the accolades, accomplishments and history aside, Uncle Frank was a super nice gentleman, with a good laugh and broad smile who loved his family and took genuine interest in those around him.

If there's a small connection to the world of comics and pop culture in this post, here it is: Frank and his older brother, John (famous cowboy actor and the "other" LONE RANGER, who also appeared in the serial "Atom Man versus SUPERMAN") were, as young lads, inspired to a life of adventure by reading Edgar Rice Burroughs' TARZAN series, as well as Frank Buck's "Bring "em Back Alive". 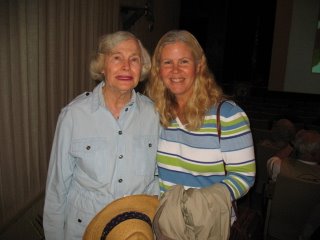 I'm including a photo here of Libby with her Aunt Barbara---a wonderful and amazing lady, in my humble opinion. When Frank went on nearly 50 African safaris, Aunt Barbara was there for darn near all of 'em. She embraced Frank's vision of an animal conservancy in what was then a fairly remote part of Oregon.

It was an awe-inspiring weekend, full of laughter and marvelous stories. I want to send my best wishes to the entire Hart Family, with thanks for allowing me to be a part of the celebration of a truly magnificent life.

FlyCoJoe
Posted by Joe "FlyCoJoe" Field at 2:50 PM No comments:

Cool Deals and a Fun Time! 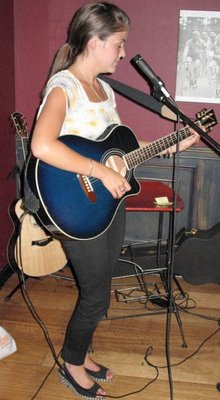 We'll be celebrating the comings and goings among the ever-fantastic FLYING COLORS' staff, including Jenny leaving for her training with Southwest Airlines, Brian leaving to help out his family's business in Benicia, and it's Andy's birthday, too. Also it may be the first time for you to meet new FLYING COLORS' team members Marty and Jazmine.

Cindy will be performing on acoustic guitar and vocals. Her first set of mostly original songs will begin around 8:30PM.

There will be some COOL DEALS, too!

Hope to see you!

Be Here for the Party! 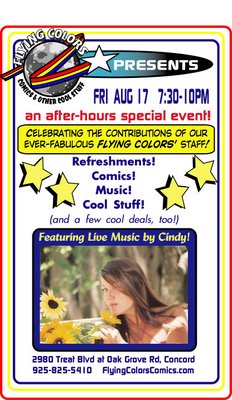 Cindy will be performing a live set of her own acoustic songs at about 8:30pm. We'll also have refreshments and snacks, along with some cool deals.

There are numerous comings and goings happening to the FLYING COLORS' staff...and this party will commemorate them all.

I hope you can join us!

FlyCoJoe
Posted by Joe "FlyCoJoe" Field at 7:49 PM No comments: