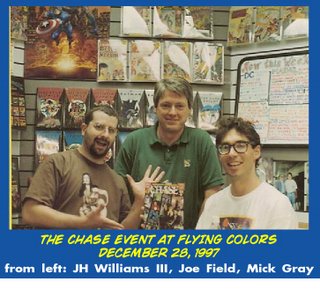 I'm thrilled to report that ever-cool comic book artist JH Williams III will be our Special Guest at our big FREE COMIC BOOK DAY event on Saturday May 5th.

JH is one of the brightest talents in the business and his current work can be seen in DC/Wildstorm's DESOLATION JONES series (with writer Warren Ellis), and on covers for Vertigo's CROSSING MIDNIGHT. More of JH's recent work can also be found in DC Comics' SEVEN SOLDIERS, ABC Comics' PROMETHEA series (with writer Alan Moore) and his writing is on display in the brand new trade paperback collection of "SNOW" a BATMAN story co-written with Dan Curtis Johnson and drawn by the late great Seth Fisher. 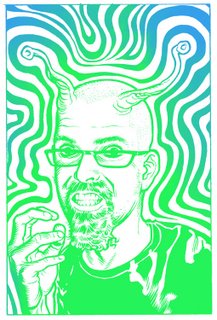 To prepare the FLYING COLORS' Faithful for his visit here on FCBD, here's a short interview to get things started.

The last time you visited Flying Colors was way back in '97 for the release of your first regular DC Universe series, CHASE. Isn't it about time that series was put into a trade paperback?
JH: Yes, it would be great to have that collected. But the material originally came out during a tough time for the industry, hence it's cancellation. So it is a bit of a hard sell to get the publisher to take a serious look at it again even though the series has been highly lamented ever since. It may take doing something fresh and new with the character to revitalize things a bit for them to go for it. We've been having discussions about it. 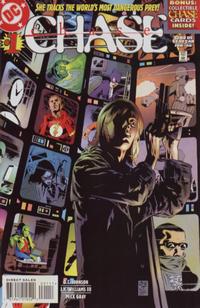 Since then, how do you see yourself growing as an artist over the last decade?
I feel CHASE was the first step toward my horizons getting broader. Since then I think I've managed to expand on things quite a bit. I'm very pleased with the extent of the marriage between experimentation and commercialism that I've stumbled onto.

However I do aggravate myself because I'm constantly fighting with how to try new things that I haven't tried before. Sometimes you just want to cut loose but the story doesn't call for it. So I try to challenge myself in other more subtle ways on those types of projects. Which is good because it keeps things diversified.

Doing interior pages for Batman calls for different approaches than doing covers for CROSSING MIDNIGHT or the work I did for SEVEN SOLDIERS. So I guess one thing that has changed since a decade ago is a feeling of more confidence and good fortunes in regards to being able to move in various stylistic challenges and finding the work acceptable. 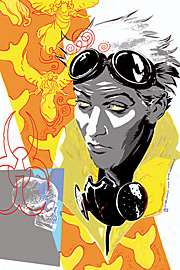 You've really become "the writer's artist"--- some of your most recent projects are collaborations with Alan Moore (PROMETHEA), Grant Morrison (SEVEN SOLDIERS) and Warren Ellis (DESOLATION JONES). What are the biggest challenges working with some of the field's best-known writers?
JH: I find that the biggest challenge is to keep things as close as possible to the writer's visions but be able to interject a lot of myself into the story as well. I try and get inside the script or story and truly see what is between the lines. Seeing what isn't being fully said and bring that out into the view of the reader through choices of shots or layouts or even style approaches.

More often than not a scene or sequence is trying to convey something below the surface of what is superficially evident. So I like to try and get at the heart of that and see if I can make something happen with it. Sometimes the presentation of that can be extremely challenging as well because it needs to feel appropriate for the moment. To make sure it works and conveys what it needs to. Sometimes it requires something very bold and dramatic that hits the reader hard or it needs to be subtle so it slowly nags at the reader subconsciously. 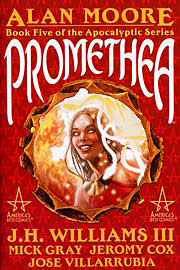 Another challenge is to get something different out of my work from project to project. Doing the first arc for DESOLATION JONES was the right thing for me after PROMETHEA because it allowed me try things that PROMETHEA didn't, two very different worlds. That same perspective applies with SEVEN SOLDIERS as well. The diversity between these projects really has made it so I can move in unexpected ways visually but still retain my notions on storytelling. I've been very fortunate in that these fantastic writers are willing to let play. They each have a unique quality different from each other. My job is really to understand what it is that they want to say and see if I can do that in ways that might not have been considered before.

You were co-writer on the CHASE series. Do you have future plans to write the stuff you're also drawing?
JH: I'm definitely wanting to do more writing. And yes I have some ideas that I feel I have to draw myself. But I'm really interested in writing for other artists. Mister Johnson and I have dabbled with that a little bit already. Besides CHASE and various short stories over the years for DC we co-wrote a BATMAN story that was published in LEGENDS OF THE DARK KNIGHT.

It was entitled "Snow" and was astonishingly drawn by our dearly departed friend Seth Fisher. It was a real pleasure to see how another artist would approach a story conceived partially by me with my sensibilities. The result was really, really nice. If anyone is so inclined to see what I'm talking about the story has been collected into trade paperback form.

Slowly but surely I'm working on other writing projects. Hopefully some of them will see the light of day.


Are there other artists' work you look at to get inspired?
JH: I'm pretty much always looking at stuff. I respond to things visually (who'd have thought). I look at a lot of things outside of comics. I tend to really study what I'm seeing to see if I can make sense of it or understand how it works. I think my mind reflects a lot of what I see, though most often, I consciously don't want it to. Those things that appeal to me tend to creep in.

However there are certainly times where I'm being very specifically motivated by a look in particular. Very often these are my attempts to homage things or learn something from it in regards to how something works or how I can relate to it.

What art assignment would make you drop everything else to take it on right this very minute?
JH: That is really tough say. My mind is constantly in flux. One moment I'm focused on BATMAN or something similar in genre to working on personal material. I tend to always be putting fingers in several pies at once. Its just never evident by what comes out or when. 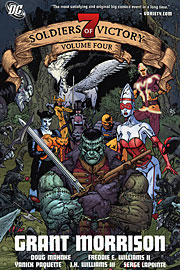 I'd say after doing stuff for the DCU for awhile I will start focusing on creator owned material again. At some point Grant Morrison and I are going to do something creator owned and I have a couple ideas of my own that I want to see happen with me as the artist and co-writer. It really is an impossible question for me because I never know what will spring to mind.

What's your favorite music that you play when working on your art?
JH: I don't keep myself limited to a certain type of music while working. I enjoy everything I put on greatly. I tend to buy a lot of music, so if I'm not listening to stuff from my archive then I just grab whatever is on top of the "new" pile.

Thanks, JH, and we really look forward to seeing you on Saturday May 5th for FREE COMIC BOOK DAY at FLYING COLORS!

JH is scheduled to be signing on FCBD from 11am-3pm, although we will be giving out free comics all day long. We'll have a great selection of JH's comics and trade paperbacks in stock on FCBD, but if there's something special you'd like JH to sign, please order it in advance and we'll have it for you on your next visit to FLYING COLORS. 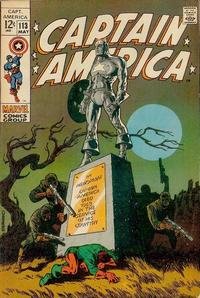 So we're talking the Death of Captain America. No spoilers here, but you must have already seen and heard the news that Steve Rogers, the man who has been Captain America since before the U.S. got into military action in World War Two, has died.

Read about in the brand new issue #25 of CAPTAIN AMERICA from Marvel Comics, written by Ed Brubaker and aritst Steve Epting. Brilliant in its execution, it's emotional, suspenseful and ultimately, saddening. At least to this old Cap fan.

Will he stay dead?
Will someone else wear the Captain America uniform?
Do true legends ever die?

Captain America has "died" before, in the classic comics pictured here by Stan Lee, Jim Steranko and John Romita Sr. But this time, those in the know at Marvel are saying this is the real thing. Or at least as real as it can get in a $4 comic book. 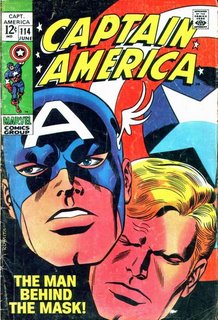 Well, the news today struck a lot of people, moving them to come to FLYING COLORS and buy and read the death of Captain America. The story continues in CIVIL WAR:The Initiative and in MIGHTY AVENGERS #1.

But is this where the story ends?
Coming soon: FALLEN SON: The Death of Captain America mini-series, where various other heroes associated with the good Captain ruminate on his passing, and look deeper into how it happened, who is repsonsible and whether there's more to the story.

Be here for the ride!

In the meantime, Rest In Peace, Steve Rogers!

FlyCoJoe
Posted by Joe "FlyCoJoe" Field at 4:14 PM No comments: