Flying Colors Will Be CLOSED Monday & Tuesday for Remodeling! 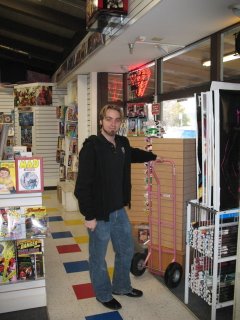 After several years of wondering if we'd ever get to this point, my long-delayed plans to remodel FLYING COLORS are finally happening.

That's Marty (Merry Marvel Movin' Man) Messner in the photo to the right. Notice some of the walls and racks are looking a little less full of cool stuff than usual. Rest assured, we still have TONS of cool stuff in stock and ready for sale in the store this weekend. 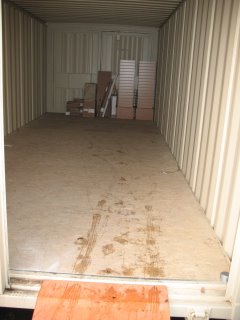 Come Monday, contractors will be here before the crack of dawn (apologies, Mr. Linsner) to begin the job. Sunday will be a moving day for us. We'll be open regular hours, and while we're here (and maybe long after we close for the night) we'll be moving our huge inventory of in-stock comics & other cool stuff into two pods that have landed in the parking lot outside FLYING COLORS.

To the right is a photo of one of the currently near-empty pods. When the contractors are done with their work (hopefully sometime late Tuesday), it'll be our turn to move everything back into place inside the store.

I've had a number of people ask why we're doing these changes---and it's my experience as a small business owner for nearly 20 years that if you aren't trying to make progress you're probably falling behind. When finished (and really, no vibrant and viable small business is ever 'finished'), we hope to have a new look that is even more organized and user-friendly than ever.

Hope to see you soon in FLYING COLORS!
Peace!

A Word about WISELY! 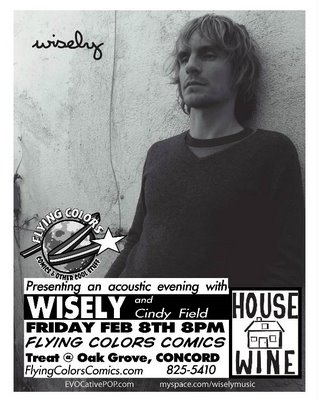 Save the date: Friday, February 8th.
All systems are GO! We're getting ready to unveil an updated look for FLYING COLORS Comics & Other Cool Stuff.

To mark the event, we're throwing a party and concert featuring WISELY. His new self-tited CD has just been released from Ella Records on the OGLIO label. The new CD is streaming
HERE! Give it a listen!

Also, be sure to check out
WISELY's new video for his song "Through Any Window" featuring the lovely JENNA FISCHER (from NBC-TV's The OFFICE and The DEWEY COX STORY: Walk Hard!).

WISELY, besides being a world-class songwriter and performer, has appeared in the HBO series SIX FEET UNDER and was also in Mike Meyer's AUSTIN POWERS: GOLDMEMBER movie, among many other credits.

So you may ask what does WISELY's "evocative pop" have to do with a comic book store? Well, I love WISELY's music and want to pass that on so more people can enjoy it, too. Cool tunes are even better when shared, y'know?

This will be one of a number of events we're planning to tie in with our 20th Anniversary. I've also noticed there's a strong connection between comic book and graphic novel aficionados and fans of independent pop music. And it's a chance to hear some good music, enjoy a glass of wine courtesy of HOUSE WINE (we'll also have cheese & crackers and a few desserts).

I hope you can join us. Should be a lot of fun.

FlyCoJoe
Posted by Joe "FlyCoJoe" Field at 12:06 PM No comments:

Don't get me wrong...I love the Holiday season, from Thanksgiving all the way through to the New Year.

But as a comic book specialty retailer and life-long comics' fan, I live for each week's rhythm that includes all the new Comics & Other Cool Stuff hitting the racks every Wednesday. The holiday schedule royally messed with that Wednesday coolness, but as of January 9, I'm happy to say we're back into the regular Wednesday groove. Woo-Hoo!

Be here for the cool stuff!

FlyCoJoe
Posted by Joe "FlyCoJoe" Field at 7:42 PM No comments:

The New Year is taking off in huge ways at FLYING COLORS!

Over the next few weeks, our store will be under-going some transformation, as we are doing a partial remodel to make our displays a bit more vibrant and better organized. Hopefully, the remodeling will be done by February 1. The store will be closed on for two days (January 28 & 29) to get the job done, so stay tuned for all the details.

Check out the videos on WISELY's page to see a special guest appearance from JENNA ("The Office") FISCHER.

Opening the show for WISELY will be CINDY FIELD, marking her second in-store live show at FLYING COLORS.

The concert event is FREE and is co-sponsored by HOUSE Wine, from the Magnificent Wine Co.

Save the date--- Friday February 8th ---and plan to be here!

FlyCoJoe
Posted by Joe "FlyCoJoe" Field at 5:18 PM No comments: 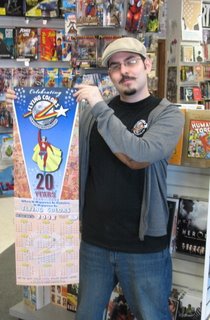 Designed by the ultra-talented Jeff "JB" Bonivert, known to FlyCo Faithful for his cool and quirky comics posted HERE!.

The new calendars commemorate 20 Years of Comics & Other Cool Stuff at FLYING COLORS with lots of Silver Age weirdness and a guide to all of 2008's NEW RELEASES' DAYs.

The calendar/posters are 11" x 34" and are suitable for hanging in the Louvre Museum (I wonder if they like comics there?).

Best of all, the calendar/posters are yours FREE when you visit Flying Colors Comics & Other Cool Stuff.