House of Mouse Consumes the House that Stan & Jack Built

Or in other words... DISNEY BUYS MARVEL!. There are reports all over the interweb covering various financial details of the deal and there's a solid report for those who want a more comic-centric view of the deal at Tom Spurgeon's fine site, The Comics Reporter. 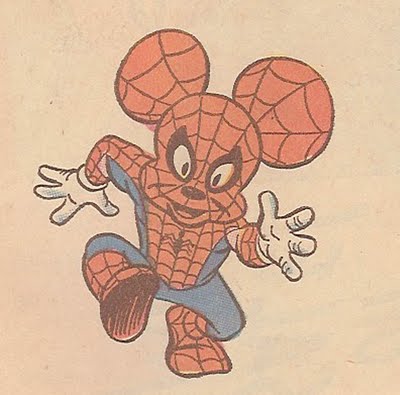 It's way too early to draw conclusions about what this deal might mean.

When I first heard the news on the radio this morning, the fan in me flashed immediately to the back pages of Amazing Spider-Man Annual #5 from 1968, where the picture that accompanies this post comes from.

As for the deal itself? Way too early for it to have any impact on the publishing of comics, either from Marvel or from Disney. This is a great deal for Marvel stock-holders, even if there was still quite a lot of unrealized upside potential for Marvel stock, current share-holders will get a nice premium for agreeing to the deal (and there's virtually no way this deal doesn't go through).

Back in 1991, when Disney had its own comic's publishing division, I was one of 12 retailers nationwide invited to participate in Retailer Advisory Board for Disney Comics. We were essentially a sounding board for ideas that would hopefully draw attention to the fledgling Disney line, featuring characters like ROGER RABBIT, LITTLE MERMAID, BEAUTY & the BEAST, along with the requisite Duck and Mouse comics.

In retrospect, the good folks at Disney Comics had a difficult time with the corporate maze above them, so a simple and essential notion like getting Disney character comics sold at Disney theme parks never materialized. After the Dell Disney comics' boom of the '50s and early '60s, comics just were never a vital component to the Disney plan to rule all media.

On the Marvel side of this deal, I think of how Marvel Comics bowed out of attending many major comic book conventions after the company emerged from bankruptcy years ago. "Marvel Entertainment" may have had a big set-up in San Diego to showcase movies and video games, for example, but Marvel Comics did not. The Marvel Comics' logic was that comic-cons were about preaching to the converted, so they were deemed an unnecessary expense.

So now we have this Disney deal coming on the heels of Disney making noise about doing their own pop culture conventions, starting with one at the Anaheim Convention Center, conveniently across the street from Disneyland. How does Marvel fit into that event? And will that create competition for the the San Diego Comic-Con? We'll wait to see how it plays out....

Looking at this deal as a business owner in the comics' industry, I'm cautiously optimistic this deal will be a good thing for our specialty market.

For now, though, we'll all just have to wait and see.

FlyCoJoe
Posted by Joe "FlyCoJoe" Field at 11:59 AM No comments:

Become one of the FlyCo Faithful! 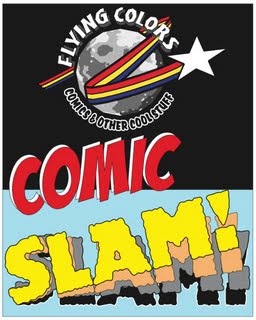 It's taken me a week to get to this report on our Marvel 70th Anniversary Party and COMIC SLAM!, so I want to start it with a great email I received from one of the FlyCo Faithful who attended the event.

Take it away, Fernando!

It is great that I can have a comic book store that is more than just a place that sells, stores & saves comics. Your store is a friendly, innovative, & cool place where the worlds of fantasy and the love of reading cool stories come to life. I think your store is one of a kind...and I am so glad that I, as well as many of my friends have been able to share in YOUR WORLDS of, at & in... Flying Colors Comics.

Thank you, Fernando--- and thanks to all the FlyCo Faithful for continuing to support Flying Colors Comics for the last 21 years! 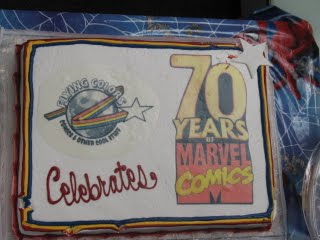 As you may know, our party was also a "good-bye" to Super-Wit herself, the one and only Melissa! We wish her well as she she head off to higher education at Seattle University. She will be missed around here! 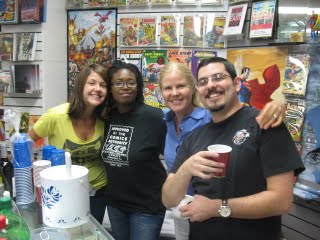 WE NEED YOU!...to become a member of the FlyCo Faithful FAN PAGE on FACEBOOK! Just hit the link (whether or not you are a member of FACEBOOK) and you'll be taken to our fan page where there are links to photos and reviews--- and where fans can post their reviews of comics and give us feedback. 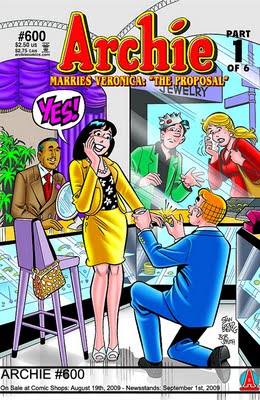 The long-awaited first issue of the "Archie Marries Veronica" story will be released on Wednesday August 19.

In the story, we see the eternal teenager ARCHIE ANDREWS actually grown up and proposing to VERONICA LODGE, much to the dismay of BETTY COOPER lovers everywhere! Meanwhile, JUGHEAD JONES will be at Pop's Choklit Shoppe continuing his long relationship with burgers and milkshakes!

In addition, another fire-haired comic book character reaches a milestone issue as DAREDEVIL #500 also is released on Wednesday. This is the final issue in the amazing run of writer Ed Brubaker (famous for his "Death of Captain America" story). 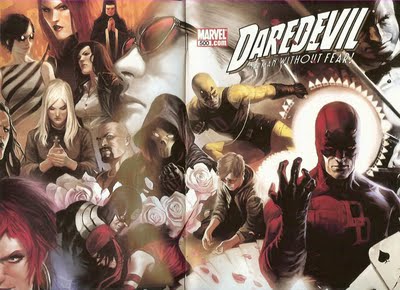 Every week, to be on the cutting edge of pop culture, you need to visit Flying Colors, where you'll not only be up on what's happening in comics, but also what's coming in other media, especially movies and TV. You see, comics are the creative core of all visual entertainment!

(Flying Colors is open from 11AM-7Pm every day of the week--- and we stay open until 8PM on New Releases' Day--- usually every Wednesday.)
Posted by Joe "FlyCoJoe" Field at 2:45 PM No comments: 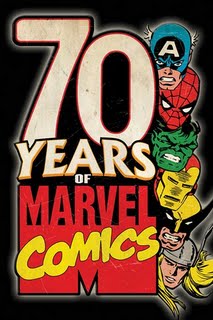 August 2009 (or thereabouts) marks the 70th Anniversary of the release of Marvel Comics #1, featuring the first use of the "Marvel" brand in comics and featuring the first appearances of major Marvel characters like the Sub-Mariner and the Human Torch.

Your pals at Flying Colors Comics & Other Cool Stuff invite you to our party Friday August 14 from 7PM-10PM.

We'll have a special Marvel birthday cake, plus refreshments (sodas,beer & wine) and other delicious digestibles.

Admittance to the party is $5 and will include a commemorative edition of MARVEL COMICS #1 ($4.99 value, while supply lasts), plus a Marvel limited-edition variant cover, and a drink ticket (for those over 21). Party attendees will also receive a party deal coupon that will be valid during the party only, so don't miss the chance to score a good deal while you have a good time!

Those attending the party will also be eligible to enter a drawing for a Marvel mini-library of comic book compilations with a retail value of $200!

And tomorrow's party will also feature our short entertainment segment, COMIC SLAM!, brought to you by the FlyCo Retailing Brigade.

But just what is a COMIC SLAM!?
It's like a beat-poetry reading, but with the pulse-punding prose found in the scintillating soliloquies of classic MARVEL COMICS, each performed in dramatic fashion
by members of the Flying Colors Retailing Brigade.

You gotta be here!

FlyCoJoe
Posted by Joe "FlyCoJoe" Field at 6:10 PM No comments: 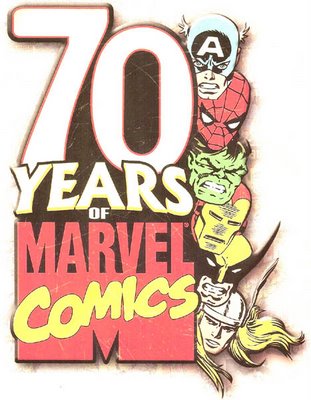 FlyCoJoe
Posted by Joe "FlyCoJoe" Field at 6:08 PM No comments: