Kleefeld on Comics, a cool blog put together by Sean Kleefeld, has an interview with yours truly, FlyCoJoe, posted HERE!

It's a discussion of the potential future of the business of comics-- certainly a great topic, but not one that has a lot of certainties to it. So if you're interested in my crystal-ball take on the topic, hit the link... HERE!


(And a reminder: New Comics & Other Cool Stuff will be available this week on Thursday May 28, a day later than usual due to the memorial Day holiday.) 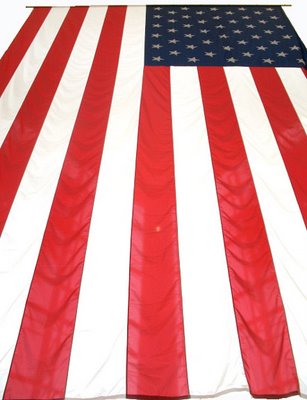 “Heroism is latent in every human soul.

However humble or unknown, they (the veterans) have renounced what are accounted pleasures and cheerfully undertaken all the self-denials - privations, toils, dangers, sufferings, sicknesses, mutilations, life...”
---Joshua Lawrence Chamberlain

'Happy' in celebrating the dedication and sacrifice of all those in Harm's Way, all those who willfully serve in our Armed Forces, all those who give of themselves in service to our great country.

Thank you to all who serve!

(Due to the holiday, our New Releases' Day will be Thursday May 28.)
Posted by Joe "FlyCoJoe" Field at 5:08 PM No comments:

Today in Baseball (and Family!) History

The date: May 24, 1935
The site: Crosley Field, Cincinnati, Ohio
The game: Home-town Reds vs the Philadelphia Phillies
Starting Pitchers: CIN's Paul Derringer vs PHI's Joe Bowman
The game: The very first night game in the history of Major League Baseball 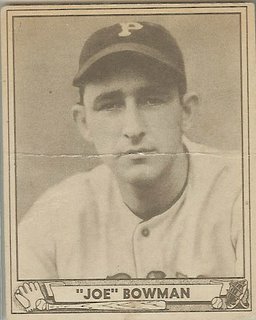 Since first posting on this blog about my great uncle Joe back in December '05, I've done a little bit more research about that game.

While Bowman was officially the losing pitcher--- the final score was 2-1 --- he pitched very well, giving up just four hits in seven innings, driving in the Phils' only run, even stealing a base, but he got no offensive help (sound familiar, Giants' fans?). I reported earlier that Joe had one of Cincy's four hits in the game, but was proved wrong by the box-score I've included below and to the right. 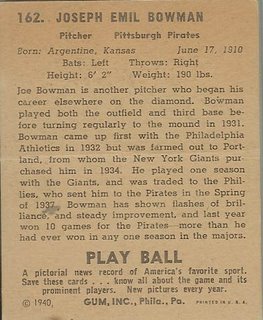 His opposing pitcher that night, Paul Derringer, is considered one of the better pitchers of the '30s, winning 20 games in a season four different times.

Like my great uncle Joe, though, Derringer had the ignominious honor of having lost more than 20 games in a single season, going a stomach-churning combined 7-27 for the St Louis Cardinals and Cincinnati Reds in 1933. Despite that one dreadful season, Derringer had a fine career and was elected to the Cincinnati Reds Hall of Fame in 1958.

Uncle Joe's career, though, lasted a dozen seasons in an incredibly rich time for baseball talent when there were only eight teams in each Major League. After his time in the Majors, Joe pitched in the talent-laden Pacific Coast League for the San Diego Padres, later becoming a minor league coach and manager. 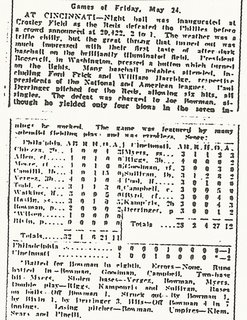 It wasn't until Joe retired from the field for good that his Hall-of Fame-worthy career began. Joe Bowman became perhaps one of the most successful scouts in the history of baseball. While he may not have had the world's most devastating fastball, he did have a keen eye for talent and a knack for signing that talent. As the Director of Scouting for Charlie Finley's Kansas City A's in the '50s and '60s, Joe was in on the signings and negotiations for some of the greatest names in baseball--- Reggie Jackson, Jim "Catfish" Hunter, Tony LaRussa, Dick Green and many others.

As the scouting director, Joe successfully led a crew of scouts with the A's and when those regional scouts found prized talent, Finley and Bowman would come to town to seal the deal. Later, he continued his scouting career with the Atlanta Braves (for a couple of years) and the Baltimore Orioles (for the last 15 or so years of his life, until his passing at the age of 80 in 1990).

So, today I'm saluting the anniversary of that first Major League night game while also saluting my great uncle Joe Bowman's entire career. I fondly remember the times as a young kid when my brother and I would get gift packages from the Bowmans, including genuine American League baseballs that we scuffed up beyond recognition by playing with them on Scofield Drive in Moraga.

Every year when I get a new Major League Baseball daily calendar, I hope to see this story covered on May 24th. Maybe this blog post will reach the right eyes to make that happen, especially with next year being the rounder 75th Anniversary of that first night game. 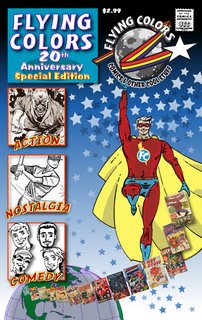 My father idolized his uncle, especially in the time after his own father died from TB in November 1934. Uncle Joe lavished my father with baseball gifts, including an autograph book, signed baseballs and the like. As a kid, my father wouldn't talk a lot about his uncle, but he was sure to make me know we were related to big league talent.

That may have been my dad's way of trying to inspire me to be a better ballplayer, but after losing a summer season to a broken arm, I also lost the nerve to face much bigger much faster pitchers. But I have always loved the Great American Pastime.

(Ironically, the broken arm led to my love of comics--when you're bed-ridden, you read more! So life does have a way of balancing the good with the bad.)

For Flying Colors 20th Anniversary, we created and published a special edition comic book that features three stories, one being the baseball "origin" story of Joe Bowman, along with a text piece about him and about my hopeful plans to complete writing a graphic novel about Uncle Joe's career and his relationship with my father.

Back to comics' news in a day or two!

(Flying Colors 20th Anniversary Special Edition is $2.99 and available exclusively from Flying Colors Comics. The cover is pictured here to the right.)
Posted by Joe "FlyCoJoe" Field at 12:00 AM No comments: 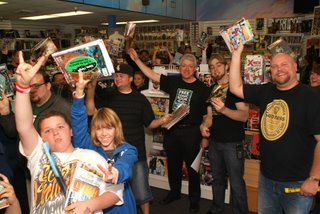 While we're hitting the links, check out our short video with interviews from our 2009 FCBD guests Glen Brunswick, Eric Jones and Landry Walker, as well as some of the FlyCo Faithful--- HERE!

If you were here at Flying Colors for the start of FCBD, you might just see yourself
HERE!

Did you see the cool promotional spot Hugh Jackman did for FCBD promotional? It's right HERE!

While you're at it, you can check out all of FlyCoJoe's videos
HERE! 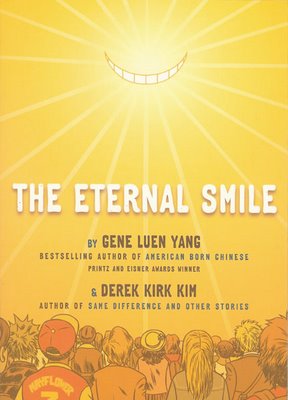 I want to point your attention to a new graphic novel called ETERNAL SMILE, by Gene Luen Yang and Derek Kirk Kim, two big talents in my eyes. Many remember Gene's breakout award-winning graphic novel called AMERICAN BORN CHINESE, while Derek scored a huge hit and awards for his SAME DIFFERENCE & OTHER STORIES

Gene and Derek's new graphic novel is a book I will gladly be putting into the hands of many eager readers. It's a graphic novel in three parts, stylistically very different, but thematically held together for a very entertaining and thoughtful read. 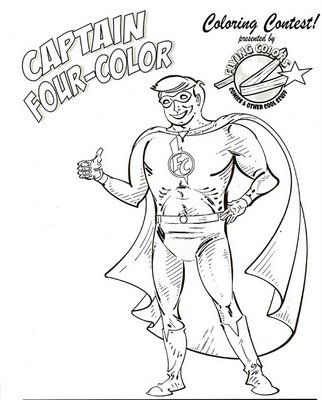 And in other news, on Free Comic Book Day, we kicked off our first-ever Captain Four-Color Art & Coloring Contest!

This contest is open to all kids 13 and under and there will be prizes for different ages, including a big prize of a $100 Flying Colors Shopping Spree! Entry forms are available at Flying Colors now---and we'll need to have your entries, creative as they can get, back here in the store by May 31, 2009.

Big thanks to everyone who attended our Free Comic Book Day party! More than 1000 people of all ages came through FlyCoLand for the free comics, the cool deals and to meet comic pros GLEN BRUNSWICK, ERIC JONES & LANDRY WALKER.

Please enjoy this video of FCBD at Flying Colors, including interviews with our professional guests: 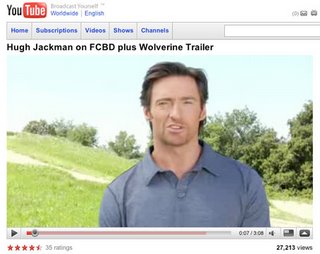 A cool little background story about Free Comic Book Day and the public service announcement that super-star HUGH JACKMAN did for FCBD can be found at my old pal Dave Olbrich's site, called Funny Book Fanatic. Please check it out for the inside scoop!