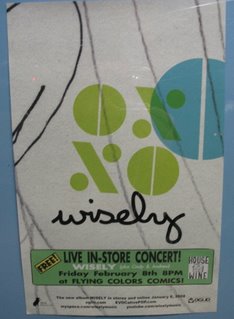 Who is this WISELY guy? And why are we making such a big deal about this event? Please check out his new album streaming at the Evocative Pop web-site. In addition to good music, we just want to do something new and different in our new store setting.

Over the years here at FLYING COLORS, I've introduced a lot of people to some cool music with the stuff we play on the store's sound system. WISELY's tunes have been played here for years. When we used to retail some great music from the premier power pop label, Not Lame Recordings, one of my favorite CDs was WISELY's "Parador". We sold several copies here simply on my recommendation. Anyway, WISELY's new self-titled CD is available through OGLIO Entertainment, which does get distribution into Best Buy and other chain music stores.

Friday night, we'll let WISELY's music speak for itself. And with my youngest daughter Cindy (and her band-mate Andrew) opening the show, plus the HOUSE WINE and snacks, it's looking like a good time.

In other news:
Sorry it's been almost two weeks since I've posted anything new here. Things have been crazy with the new lay-out for FLYING COLORS. The whole staff here has worked some very long hours to make the new look of the store something special. 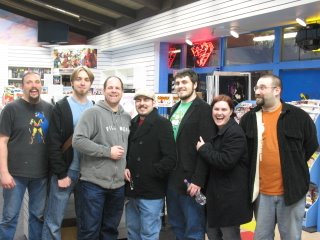 We worked long hours on Sunday January 27 to unload the whole store so the contractors coming in the next day could do their thing. Then the crew was back for Tuesday night to re-load the store and get things ready for the new stuff on Wednesday.

Big thanks to the whole crew that helped. In the photo here, from left are: Jon, Marty, Dave, Mike, Andy, Kat and Cameron.

It's been only eight days since the new FLYING COLORS debut. We're still working our way out of some less essential boxes, tweaking displays and filling empty spaces. For those of you who've been asking, we'll be doing a fairly major re-stock of our back issue bins over the next few weeks.

FlyCoJoe
Posted by Joe "FlyCoJoe" Field at 6:13 PM No comments: