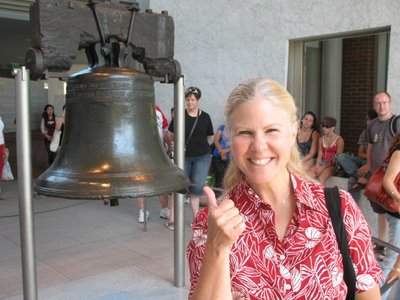 Even on our first real vacation (of more than two days) in the last several years, I've found time to fit in some comics' business. Last night in the Philadelphia suburb of Media PA, I was part of a group of close to 20 of my retailing colleagues from the greater Philly area. Some came from New Jersey, I believe there was at least one from Maryland... and we all had a good time talking industry insider stuff.

The meeting was coordinated by my pal George Stasky from Brave New Worlds with stores in the Old City of Philly and the suburb of Willow Grove PA. besides the copious amounts of pizza and beer (Hop-Devil!) consumed, we talked a lot about ComicsPRO, the retailer trade association for which I'm currently serving as president. We talked about the good things that can happen when colleagues in the same business work together. In the process of the meeting, three new members joined the retailer ranks of ComicsPRO. Thanks to George for doing the meeting set-up and to M ike Clark of Showcase Comics for hosting the meeting at his very nice store in the Granite Run Mall. 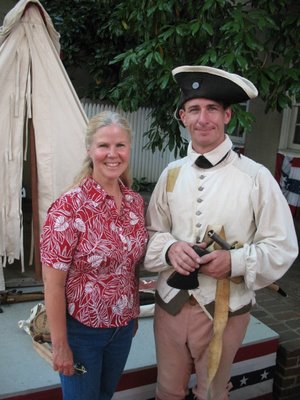 As for the vacation part of things, Libby and I did a walking tour of historical spots in the Old City of Philadelphia, seeing such sites as Independence Hall, Betsy Ross's house, the burial place of Benjamin Franklin, the national Constitution Museum and the Liberty Bell (which, after you see the photo here, will know why I now call it the Libbyerty Belle. Take a look.)

The second photo shown here was taken at Betsy Ross's house. Libby is shown with a colonial era soldier who told compelling stories about the birth of the USA and his reasons for joining the fight. I was honestly not prepared for feeling of patriotism that were stirred in me by visiting these hallowed places of American History. 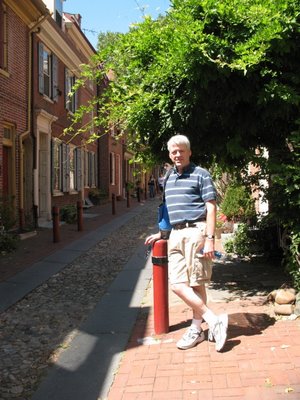 The final photo here shows FlyCoJoe at Elfreth Alley which is the oldest continually inhabited residential street in the US. Elfreth was a primarily Irish neighborhood and since that old Irish is still in me blood, it was a chance to think of some of my ancestors who fled the famine and the prejudice to get to a better place....America. Still, after 300 years, we have many from other countries coming to America to flee persecution and to find a better life.

After a couple of days in the City of Brotherly Love, it's on to Pittsburgh for the Three Rivers Progressive Rock Festival. Sweet!

One of the great new releases tomorrow is new book called "BUSCEMA: A Life in Sketches" by Emilio Soltero, a compilation of artist John Buscema's preliminary sketches and page/panel layouts.

It's very cool look into the mind and talent of one of this industry's classically styled pencillers. Particularly when looking at Soltero's book and these sketches, one sees that Big John was influenced by Alex Raymond, John Allen St. John, Hal Foster and other earlier 20th century illustrators. 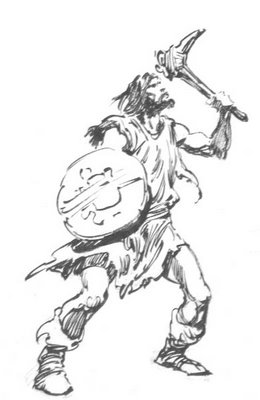 John Buscema is probably best known for his long run on Marvel's CONAN the BARBARIAN title of the early '70s, taking over for Barry Smith (now known more as Barry Windsor-Smith) after Smith's seminal early run on the Robert E. Howard character.

Big John was a more than an able successor to Smith. He refined and defined the look of Conan comics starting in the early '70s. 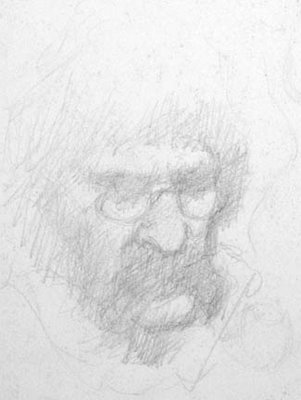 My first encounter with John Buscema's art was in 1967 when he pencilled Marvel's AVENGERS. From that time on, he was always one of my favorites, so I was very happy years ago to acquire some of his original pages, mostly from another of my favorite comic artists, Jim Mooney, who inked Big John's work on Marvel's FANTASTIC FOUR for an issue or two. 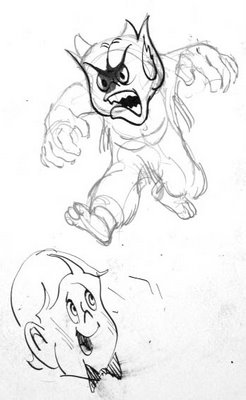 I own several pages from FF #117, from 1971--- excellent pages featuring the Human Torch, the Thing and Crystal, along with Diablo and Lockjaw.

When I bought the pages from Jim Mooney, I didn't expect to find some bonus sketches by Buscema on the backs of each page. Some of his most interesting work was done on the back of his original art pages. Jim Mooney wrote me a blue-pencil note on the back of one of the FF pages "These sketches are the greatest. I really hate to part with them." 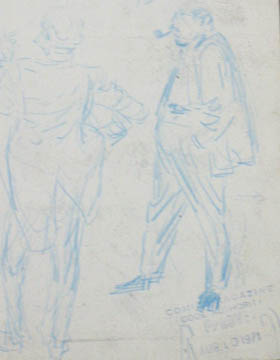 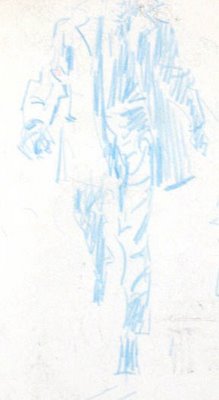 Buscema really made no bones about the fact that he didn't much care for drawing super-hero stories, though he was among the best in the field for most of his career.

John Buscema was not only a master of comic art, these sketches and the ones in Soltero's new book prove that he was an avid practitioner of his craft. 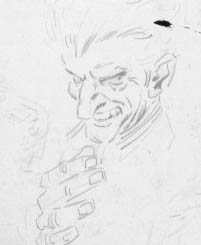 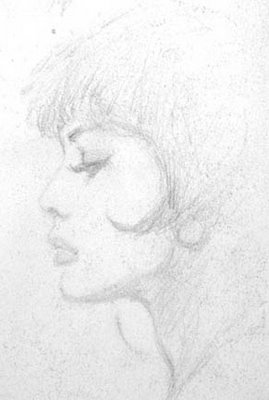 Today's comic art students could sure take a lesson from John Buscema and the artists of John's generation. The best constantly work to hone their skills and improve the facility of their art. 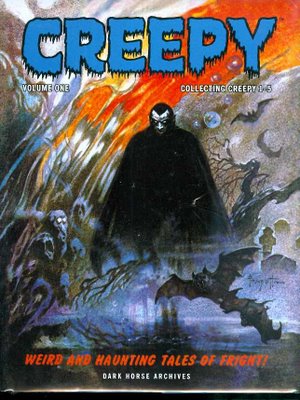 CREEPY magazine, along with EERIE and VAMPIRELLA from Warren Publishing were the heir to EC Comics' throne.

Dark Horse Comics is publishing these great comics in hardocver with excellent art reproduction and attention to detail that these quality comics warrant.

Also on tap: ATOMIC ROBO: Dogs of War #1. Jump on now for another thrill ride brought to you by the fine folks at Red 5 Comics. 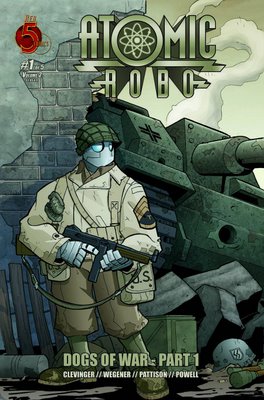 Don't miss these other highlights among this week's New Releases--- 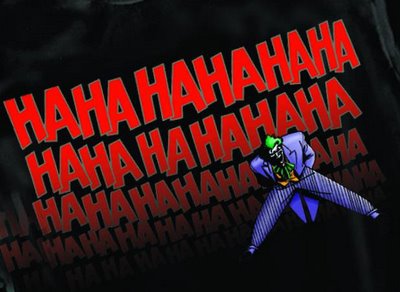 And that ain't even half of it!
Be here for the buzz of New & Cool most every Wednesday at FLYING COLORS! 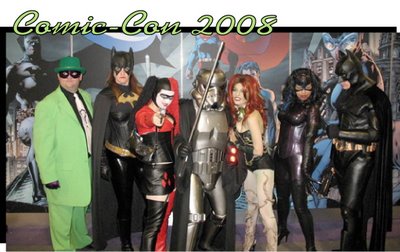 Time has really slipped away from me since returning from Comic-Con International: San Diego, the lovable behemoth of comic book conventions.

I've been asked for my thoughts about the con dozens of times since I returned to Flying Colors. Truth is, I didn't see much of the craziness of the convention this year.

I was so jammed with meetings with publishers and other retailers, Libby and I wound up having only about three measly hours to see the 500,000 square feet of exhibit hall space. No way we could we even make a dent in all the pop culture eye candy that awaits at every turn in the convention center.

When we walked by the DC Comics set-up, though, I took the photo you see here of some cos-players doing their renditions of mostly recognizable characters. Although, as I told NPR's "Marketplace" host Kai Ryssdal, costumers only make up a very small percentage of con-goers, they are a very visible minority. I think it's great these folks have an outlet for their costuming skills, if not their acting abilities.

Friday at the San Diego Con was one long day! It started with a meeting at 7:45AM, which melted into retailer programming that lasted until 6PM, which was followed by the Eisner Awards ceremony at 7PM and we didn't get out of there until 1:30AM (there was short after-party). At the Eisners, I gave a tribute speech for my fallen friend, Rory Root of Berkeley's Comic Relief .

Make no mistake about it, the job done by the San Diego Comic-Con organizers is nothing short of herculean. Take 125,000 fans, add something along the number of 20,000 "professional guests", another 3000 media reps, maybe 2000 total "exhibitors" and you've got a recipe for one huge log-jam. That said, I had no troubles getting to where i wanted, other than the pleasant diversions created along the way by running into friends and colleagues I see only once or twice a year.

As for all the talk about Comic-Con moving to another city, don't believe it. San Diego is the only city in the U.S. that could host this convention as well as it does.
Sure, there's the possibility of having more events away from the main convention center, like last year's viewing of the "300" movie at the Padres' Petco Park. And there are lots of meeting spaces in nearby hotels that could work for some programming. But to think of moving this great event to ---where? Vegas? In late July? Anaheim? During Disneyland's busiest time of the year? Los Angeles? To that less than adequate convention center with stifling traffic all around?

It's San Diego for the long term. And that's really how it should be. Temperate weather, nice people, a Comic-Con staff that is mostly from San Diego, a very good facility (even if it needs even more expansion!), proximity to Hollywood.

Look, the bottom line is that there have been comic-cons grow into pop culture media cons all over the country, but none have ever come close to all that San Diego delivers.

Congratulations to the Comic-Con staff on another stellar year!

FlyCoJoe
Posted by Joe "FlyCoJoe" Field at 2:42 PM No comments:

Email ThisBlogThis!Share to TwitterShare to FacebookShare to Pinterest
Labels: comic-con 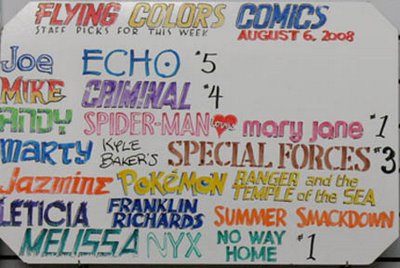 Here's a look at this week's Picks for good reading from the Retailing Brigade at Flying Colors!

This is also Jazmine's last week on staff. She'll soon be leaving for college and new adventures in Seattle. Her final shift here is from 3pm-7pm on Friday August 8 (that's 8-8-08 for you numerologists).

So thank for the memories, Jaz! Here's to many wonderful things happening in your life in the coming weeks and years!

FlyCoJoe
Posted by Joe "FlyCoJoe" Field at 3:17 PM No comments: