Been a crazy day here and we've only been open for a couple of hours. Why? Because of the total frenzy surrounding the release of Amazing Spider-Man #583, featuring a back-up story in which Spider-Man meets Barack Obama on Inauguration Day. 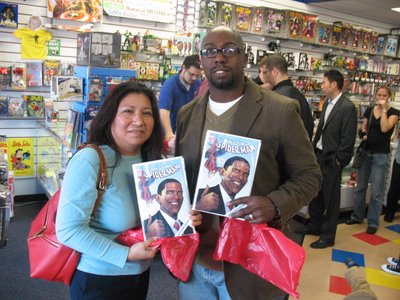 Here are my answers to your Frequently Asked Questions about this particular comic book:

1) Right now, we still have copies of the Obama variant cover, but they will not last the rest of today. [Note: As of 2:00PM, all of the Obama covers are gone, but we still have first printing Amazing Spider-man #583s with the regular cover]

2) No, we are not taking reservations for the remaining copies we have in stock. If we did, there wouldn't have been any left for the many people coming into the store today. By not accepting reservations, we are trying to be fair in getting as many copies as we have to as many different readers as possible.

3) Yes! We are taking advance orders for the Obama cover edition with a different color background that will hopefully be arriving next Wednesday January 21, the day after Inauguration Day. [Update: Marvel Comics has announced that the 2nd printing Obama cover is now sold out from the publisher level. Flying Colors is still taking orders for this issue!] 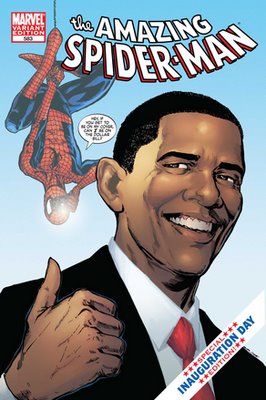 4) No, this comic book will not "put your kids through college in another 20 years." It's a fun little tie-in to a presidential inauguration, not a financial annuity.
If we depended solely on the collectability of comics, there's no way Flying Colors would have lasted more than 20 years here in Concord.

5)While I am grateful that Marvel Comics was able to get tons of publicity about the release of this issue, I am not so happy with the major hoops that the Marvel company asks its retailers to jump through to try to satisfy our many customers.

6) Flying Colors has a ton of other great comics and graphic novels in stock for readers of all ages and interests. Comics are an entertainment medium first, last and always.

I agree it is a fun issue to have. I DO MEAN FUN.

FYI - On eBay, the highest single copy sold price to date is $220 - free shipping and seller guarantees CGC rating of 9.8

While I don't want to cast aspersions on anyone either buying or selling the Obama comic for big bucks, my advice is always to step back, be patient and wait for the dust to settle.

My guess is the price will settle in at $25-30. But I am NOT giving "investment advice". The thing about this comic is that it is more about the event of the inauguration of the country's first black president than it is about making a fast buck on a collectible.

In short, enjoy the moment if you so desire, but let's get real: This comic book will never be as rare as ACTION COMICS #1, never as valuable as honestly "scarce" other comic artifacts.

I guess I find some kind of ironic joy in people spending crazy money on a comic book in a time when dollars are supposed to be hard to come by.