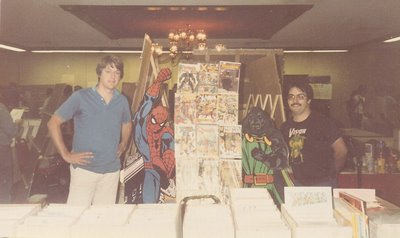 ...that Flying Colors Comics & Other Cool Stuff first opened for business. Yes, it's our anniversary today. And while we have no big celebrations for today, please stay linked in for news coming (hopefully) soon.

So here's a little photo look-back at the early days. Up top, that's FlyCoJoe and his pal (and still FlyCo Faithful) Jerry Fuentes setting up as comic dealers at Stockton's Cosmic Heroes convention, back in probably '87. We had a kick of a time talking comics all day long, selling a few along the way, probably acquiring even more than we sold. 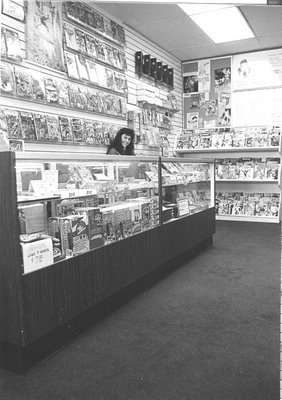 Jerry was a friend from the moment he joined the staff of KJOY radio when I was on staff there in the sales department and he was a DJ. As a comics fan, Jerry was always in on my little schemes to combine comics and radio. When Stan Lee came to town to accept a key to the city and tell the world that Stockton had officially become the "birthplace of the Fantastic Four", Jerry was on the air that day to do a live interview with Stan the Man. Good times!

These days, Jerry works for the Army Corps of Engineers, but dabbles at night as an author. Jer's first book
Deliverin': The Legend of POCO is soon to be published.

If you click on the link provided, you'll find a cool web-site with tons of live concert info about POCO, Buffalo Springfield, Jim Messina and other cool country rock bands. Check it out! 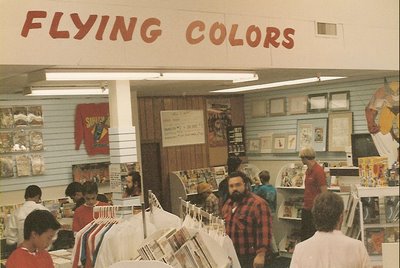 The second photo shows one of the two original Flying Colors Retailing Brigade members, Anne Goodrich, in a very empty store (a lot of days were like that back then).

And the third shot shows part of the store on our Grand Opening event day, Saturday October 28, 1988. My, how things have changed!

Bottom line, I want to thank everyone who has allowed us to stay open all these years by continuing to give us your business. We've made a lot of friends over the years and as a wise one once said "The best is yet to come!"

It stuns me a bit that PB is 14 years old now. It seems like only yesterday that we first opened. Oy!