Since my former WonderCon partner Mike Friedrich and I sold the convention five years ago to the hard-working folks at Comic-Con International, WC has exploded in popularity. I couldn't be happier about that. It's a relief for me not to have the huge task of helping to organize a major convention anymore, and the great team at Comic-Con has taken our good-sized regional event and turned it into a major happening on the comics' calendar. 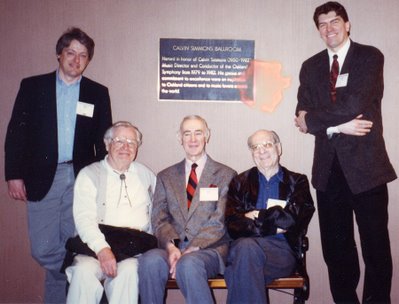 Along with tons of cool stuff for sale at the show, a number of Hollywood happenings are in store for WC fans and attendees, including advance looks at ucoming movies like FRANK MILLER'S 300, SPIDER-MAN 3, and others.

We still have advance tickets for sale at FLYING COLORS, so our suggestion is to pick up your weekly supply of Comics & Other Cool Stuff at FLYING COLORS (New Releases' Day is Wednesday!), then save a few bucks by getting your WonderCon tix from us.

(I'll be there for a short time on Friday afternoon and then most of the day Sunday. Join me and some of my comics' retailing friends for a panel at 11:30AM Sunday. The topic is "The Future of Comics' Retailing", moderated by Dan Shahin of Hijinx Comics in San Jose.)

The photo shown here is from WonderCon in 1995 at the Oakland Convention Center. That's me on the left---along with artist Dick Ayers (SGT FURY, etc.), the late artist Gil Kane (GREEN LANTERN, SPIDER-MAN, HIS NAME IS SAVAGE,etc.), the late DC editor Julius Schwartz and writer/editor Jim Shooter (former Marvel editor-in chief, also of VALIANT and DEFIANT). So there I am---at that time in 1995, I had all of about eight years professional experience in the comics' world, along with some of the most experienced and talented people the comics' biz has ever seen. I did a rough estimate that the other four gentlemen in the photo with me---at that time had combined for nearly two CENTURIES of professional experience in comics! Yow!!
Posted by Joe "FlyCoJoe" Field at 1:40 PM