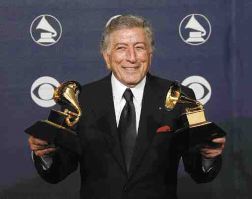 Some random thoughts after watching (most of) the GRAMMY Awards on CBS last night:

* There's something oh-so very wrong with the music business when TONY BENNETT, upon receiving his award for his duet with STEVIE WONDER, thanks TARGET. That's right---TARGET, the department store chain that is apparently a big player in the music business. I'm not sure which is lower---all the winners thanking their lawyers or Bennett thanking corporate America for absconding with the American music business.

* As much as I feel the DIXIE CHICKS won their awards last night more for their out-spokenness about the War in Iraq than about their music, I couldn't be happier for Dan Wilson, one of the CHICK's co-songwriters and the former front-man for an honestly excellent group, SEMISONIC.

* Loved the bit with with SMOKEY ROBINSON, LIONEL RICHIE and CHRIS BROWN, representing the last 40 or so years of R&B. And a clearer delineation of where the music business has fallen down can't be found--- SMOKEY's still lovely voice on his classic "TRACKS OF MY TEARS", then LIONEL's still strong vocals and piano on "HELLO" (although I wish he would have sung the Commodores' hit "EASY"), followed by CHRIS BROWN, who with a a lot of dancers worked up quite a sweat before he actually did any singing. We've gone from the substance of classic voices to the style of lots of movement on stage, but an almost total lack of melody.

* Saw on the crawler at the bottom of the screen that JERSEY BOYS and producer/songwriter BOB GAUDIO won a Grammy for BEST MUSICAL SHOW ALBUM. Libby and I saw the San Francisco company performance of JERSEY BOYS earlier this month at the Curran Theater---and it is a killer show! Something like 90% of the cast not only sing, dance and act, but also play musical instruments.

* Another forty years from now, people will still know "TRACKS OF MY TEARS" but it's doubtful they'll remember any of the songs nominated at the 49th Grammy Awards' show. During some stretches of the show last night, I found the music much better on the TIME/LIFE "Classic Soft Rock" infomercial than on the Grammy show.

* Another thing about the old stuff on the infomercial: It's clear to me that style didn't account for much of anything back when radio ruled the music business. There were some downright stop-a-clock ugly people making hit records in the '70s, while love it or hate it, the music business today is ruled by style.

* You haven't been humming any of this year's Grammy winners today, have you?

* Although someone please tell those old guys from AIR SUPPLY to button up their shirts. Seeing that is almost as bad as their sappy songs...

* Loved seeing the POLICE open the show, but I really wish they would have done just about any other song than "ROXANNE". Guess it would have been too much for them to do something like "WALKING ON THE MOON". Coming soon: an over-priced, over-hyped POLICE reunion tour at venues better suited for NBA games than concerts.

* And aren't we all feeling just a little bit better that JAMES BLOUNT and his totally insipid tune "YOU'RE BEAUTIFUL" got shut out last night? Somewhere that song is already being used to torture the innocent.

It's rare that I read that many comments about what's going on in music and agree with every single thing that's said. You're battin' 1000.

>>Loved seeing the POLICE open the show, but I really wish they would have done just about any other song than "ROXANNE".<<
And they didn't even do it particularly well! Sting can't seem to find those high notes anymore (which sorta defeats the purpose of playing that song), and I didn't like that jazzy little breakdown in the second verse at all, no sir.
I'd been all excited about the prospect of a Police reunion until I actually saw them reunited. Now I can safely go back to pining away for a Talking Heads comeback.