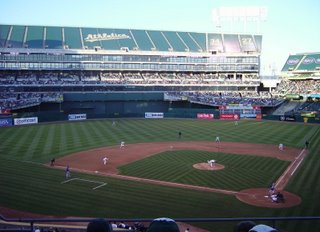 Due to the Memorial Day holiday on Monday, we'll be running a day late late this week, so THURSDAY JUNE 1 will be New Releases' Day this week at FLYING COLORS (and every other comic shop in the U.S., for that matter).

Libby and I took in the Oakland A's game on Memorial Day evening and it was a beautiful night at the old ball-park. The A's dropped another one, despite the home runs of Frank Thomas and Nick Swisher. The two pics here are from last night's game and the "Pyro-Spectacular" fireworks' show after the game (lame as my pic here is, it was a good show). 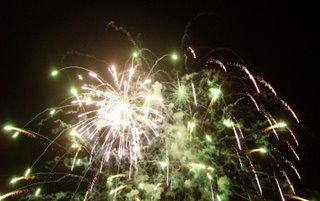 As for comics (and other cool stuff) what a week it will be!
Here a just some of the highlights of this week's New Releases:

* A strong week for ONI Press with Brian Wood's LOCAL #5 and Sam Keith's MY INNER BIMBO #1 leading the way.

* 52 Week #4. The more you know about the DC Super-heroes, the more you will love this series. Still, it's a series that everyone should check out as lots of future stories in other continuing series will spring from it (like the upcoming first appearance of the new JUSTICE LEAGUE of AMERICA).

* I want everyone to pick up a copy of SUPERMAN/BATMAN #26 (pictured here). For one thing, it's an INFINITE CRISIS tie-in, giving us a little more behind the relationship of SUPERBOY and ROBIN. More than than, it's a star-studded issue with work from a Who's Who of Great Comic Talent. Writers include Jeph Loeb, Brian K Vaughn, Joss Whedon, Brad Meltzer, Allen Heinberg and Geoff Johns (and more!) Artists include Jim Lee, Joe Madurueira, John Cassaday, Michael Turner, Pat Lee (and more again!)

Most especially, you need to pick up this issue because it truly is special. Series writer Jeph Loeb's late son Sam, plotted the story and was slated to write it until he succumbed to sarcoma last year. In his stead, the all-star roster of talent stepped in to finish off the issue and show their respect for Sam Loeb. Sales of this issue will benefit the SAM LOEB SCHOLARSHIP FUND. A fun read, the biggest assemblage of talent on a comic book in years--- and it benefits a good cause. Sounds like a no-brainer pick-up to me...

So much more will be in-store THURSDAY JUNE 1--- be here, willya?

(Due to the Memorial Day Holiday, our store hours for this week are Tuesday, Wednesday 11am-7pm. We will be open 11am-8pm on THURSDAY for New Releases' Day.)